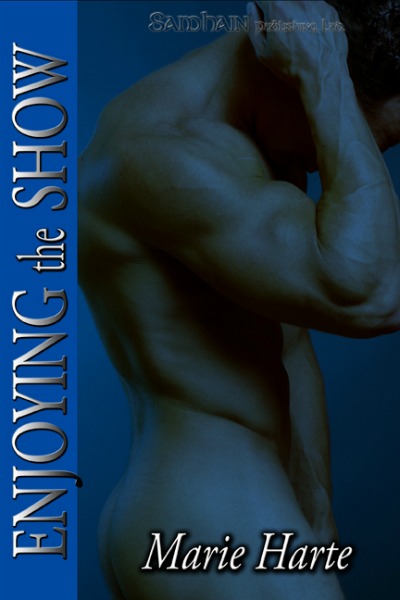 It's innocent, if slightly indecent fun. About as indecent as the shy and a little uptight Hailey Jennison gets, actually. She and her friends get together every Friday night for some very specific girl time. Gathering around the window in her friend's apartment, lights off, snacks and drinks in hand, they look out the window and down into the apartment of the man they refer to as Mr. Tool.

The man is smoking hot and has a habit of walking around his apartment barely clothed, sometimes not clothed at all (and aren't those happy nights!), with his lights on and his shades up. Hey, a girl's gotta grab whatever salacious fun she can, right? It's harmless and he's the man of her dreams - literally. Then she goes out to get some more booze for the girl's night and Mr. Tool confronts her about her and her friends' weekly activities.

Mr. Tool...Gage for those who actually know him as more than just a bit of man candy, gives Hailey an ultimatum. Either she goes out on a date with him, or he calls the cops and files a complaint about her and her friends' weekly peeping.

For six months Gage has been hoping for a chance with Hailey. She had moved out of the complex before he worked up the courage to talk to her, but he caught her and her friends spying on him one night and has gone out of his way to make sure she has plenty to see ever since. True, blackmailing the woman for a date isn't exactly the most gallant thing he's ever done, but it got the job done. Finally. Now, if he can just manage to get through the date without opening his mouth and sticking one or both feet into it.

To say Gage is socially awkward around women would be a gross understatement. It makes starting a relationship hard, especially when he is as attracted to a woman as he is Hailey. A little blackmail seems a small matter for his pride, though, if it gets him a shot with Hailey.

I liked that there was a surprisingly plentiful cast of secondary characters. The length of the story didn't give much room for them to be fleshed out very well, but spending time with Gage's family and Hailey's friends did add a bit of depth to both main characters. Depth that I enjoyed. I was amused by the relationship between Gage and his brothers and mother. Those weekly breakfast/guilt sessions and the sibling ribbings that went on seemed very natural to the characters and situations. I enjoyed them a lot.

I wish that Harte had pushed the envelope of Gage's awkwardness around women even further, because he never really struck me that way when he was around Hailey. He certainly wasn't Mr. Charming, but to have built up the level of neurosis he had over his lack of ability to speak to women without saying something wrong, I would have expected him to be much, much worse than he was. Maybe if he'd been even more blunt, or less endearing with his clumsiness, I would have bought into it a bit more.

Hailey didn't do much for me, really. She didn't annoy, but she's too familiar as the uptight, tightly wound Type A personality bordering on prissy. The girl with a killer bod and an ice maiden exterior fashioned from her fear of pain. I wish more originality had gone into her character, but she at least held her own.

It was hot, though, I'll say that. And I do have a soft spot for the themes of unrequited love (or lust) and love (lust) from afar, like Gage had for Hailey. He was kind of geeky-cute with his affections and I enjoyed that aspect very much. For a quick read that will definitely raise a gal's body temp, I'd recommend this one, but I personally would have liked more story and a less annoying conflict.

Return from Enjoying the Show to Non-Series / Stand Alone Titles

Return from Enjoying the Show to OGBDA Book Review Home