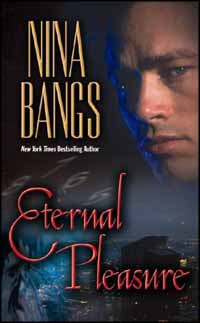 He is one of the Eleven, ancient predators who have been brought forth by a godlike male after sixty-five million years, awakened to battle a group of immortals who are on the verge of scouring the earth of humans. She is his driver. Ty Endeka has a human body, but his soul is that of a Tyrannosaurus Rex. Kelly Maloy is human. The attraction between them is primordial but the danger they face is unimaginable. Kelly is drawn deeper and deeper into a world she'd never known existed as she drives Ty around Houston, meeting vampires and otherkin, and battling werewolves. And coming face to face with the most soul-deep terror she could have ever imagined.

Bangs has offered up a unique concept - it's not every day you read about dinosaur warriors fighting immortal evil - and characters that had appeal. While some aspects are familiar in theme to Kenyon's Dark-Hunter series and others, I'm was thrilled to get away from the Greek pantheon which has proliferated into so many other series. I was charmed by the Eleven and amused by their soul nature. Other ancillary characters lacked a little depth, but there was a wide array of them introduced and they fleshed out the scenes nicely.

The problems I had with Eternal Pleasure weren't character-based, nor were they centered on the concept of the book. It wasn't even the plot itself, which I thought had some promise. Where this book broke down for me was the execution and delivery of the plot. There are lots and lots of paranormal romance series that are similarly themed (and I read most of them): a brotherhood of badasses fighting together against a seemingly unbeatable foe. Ward does it, Kenyon does it, Showalter, Adrian...and the list goes on. And on. It's a familiar and well-tread theme. Through them I've realized that the devil is in the details, and there just weren't many here - and those that were didn't make a lot of sense in this book.

I tend to visualize the worlds that authors create, the arc of their series, the plots of each book, and the characters that inhabit them all as deep, wide, dark lakes full of promising story in which I like to swim. In Eternal Pleasure, though, instead of been thrown deep into that story lake with the force and creativity of the exposition, narrative, and dialogue, it felt more like the author took a flat rock and skipped it across that glassy surface, and the book was the sum of the spots the rock touched as it danced across the top. I never felt submerged into the world, the plot, or the characters lives. Too many things went unexplained, or avoided, or danced around. Instead the focus was on the relationship between Ty and Kelly and a lot of repetition about Ty's struggle with his T-rex nature.

We're allowed to know that dino-boys aren't just dino-boys (that's probably a good thing, because...well...ew). Before that they were something else, and it's big and awful and crippling...but their memories have been wiped because of the trauma it would cause them or the distraction it would provide. That's convenient for a couple of reasons - not only to cue the dark, mysterious music and try to add a layer of threat and mystery (unsuccessfully), but also to provide danger for the women who love them, and who will have to enter their beast and join their soul to be their mates (apparently, verbal commitment and a ring just don't cut it with dinosaurs and PNR series with this sort of theme are all about the metaphysical connections). Unfortunately, all the potential for scary threat and "no human love can survive that" angst was ultimately unrealized when the story stone skipped its way across that part of the lake.

It was a problem that recurred throughout the book. Lots of teasers and hints and nudges towards a bigger picture than a bunch of dinosaurs stalking the night...lots of skips of that stone over what could have been a deep, dark, delightful lake of story...and no real moments of sinking in and getting any more than your toes wet. It was impossible for me to connect to the story or the characters more than superficially because of it, and in some places (most notably the scene where Neva disappears and the events that follow), make the characters concern even for each other seem false and unrealistic (hard to believe someone could be SO upset over a person's disappearance when they had only met that person once...in passing...and impossible to sustain belief in the bosom buddy attempt following it).

There's promise in the originality of the concept, there's comfort of familiarity in a favored theme, and there are characters and story I could care about...but if the next book doesn't do more diving than skipping, I think I'll be leaving the Gods of the Night shores.