Just A Boy, His Horse...and Armageddon

He has spent five thousand years as the greatest warrior the earth has ever seen, worshiped by some as a god, feared by most, his very presence stirring humans into vicious bloodshed. He is Ares, one of the four Horsemen of the Apocalypse. He is War.

But don't call him that. It irritates him. And no one wants a cranky War.

Technically he isn't War...yet...and won't be until his agimortus is triggered and his seal breaks. That would be a very bad thing, because when War rides, Armageddon will be in his wake.

There is nothing that Pestilence wants more than to break Ares' seal as his was broken (Sin Undone (Demonica, Book 5)) and have his brother take a walk on the evil side with him, wreaking war, spreading disease, and being all around bad chaps as demons are released from Sheoul and humanity gasps its last, brimstone-laden breath. To do so he's got to track down Ares' agimortus and the Unfallen who bears it and kill her. Easier said then done, really, but Pestilence is nothing if not very, very evil and very, very motivated. And when his plans didn't go quite as planned they still worked in his favor, the agimortus getting forced into the body of a mortal woman. Pestilence figured his job just got exponentially easier.

Cara Thornhart would disagree with him if she could, but in the past few days her life has taken a serious turn towards the weird and mythical and now she is bonded to a hellhound, protected by the sexiest but most infuriating Horsemen she never knew existed, the target of nearly every single beasty that goes bump in the night, and has some sort of mystical agi-mortified thingie that's slowly but oh-so-certainly draining her life. Really, by that point, finding out she's the trigger in an unholy Armageddon wasn't all that traumatizing. Not to mention being with the sinfully delicious Ares is almost worth the approaching reckoning, no matter how desperately he tries to remain emotionally closed off to her. Pity about that whole dying thing, though.

Kicking off a new series, Larissa Ione expands the familiar world she created in Demonica, starting off with a slightly overlapping timeline but a different focus. It was a nice way to frame the series, because it was easy for me, as a huge fan of the Demonica series, to sink back into a world that I grew quite fond of with some characters - mostly secondary and ancillary - who had been previously introduced. For readers unfamiliar with that series, it may be a little harder to really embrace this one. There are so many things, groups, and people with backstory firmly planted in previous books, that new readers may feel like they're getting dropped down in the middle of an existing series instead of starting a new one.

Though I didn't have that particular problem, I did have some issues with the first third of the book. I felt the extended prologue was a little heavy with infodump and a little overwhelming, and a couple of the subsequent chapters seemed a little muddy and cluttered as the plot was laid out and characters were introduced. The scenes that introduced Cara and gave her and Ares their first meeting felt particularly awkward and abrupt to me. I wasn't quite able to sustain a willing suspension of disbelief at a few key points and as a result, much of Cara's introduction to the story and to Ares felt contrived and forced. I was also disturbed by the portrayal of the Guardians who broke into her house, jumped to all sorts of conclusions, and came off as brutish, abusive thugs, though honestly, that didn't surprise me. I had always gotten mixed signals about the Aegis in the Demonica series; militant fanatics on one hand, a repository of useful information and a force for good on the other. It seems that dichotomy is destined to continue here.

I struggled with Ares' character at the start of this book. I didn't find him all that appealing or sympathetic at first, but he did eventually grow on me as the book progressed. My biggest problem with him never went away, though. For having five thousand years of experience, Ares didn't show any evidence of being a master strategist when the action really started to ramp up. Pestilence seemed to out-think, out-plan, and out-maneuver him at every turn. Some of that may be explained away by Cara's effect on him, but he's War for goodness sake - I would have liked to see at least some glimpses of brilliant strategy. Cara, on the other hand, I enjoyed from the start, and thought she had a pleasing blend of strength and compassion, sharp wit, bravery and vulnerability. Her abilities were a nice touch, though I wish there had been more focus on and explanation of them.

As is the case in almost every Ione book I've read, there is a well-rounded and three dimensional group of secondary and ancillary characters that I quickly grew fond of (or frustrated with as intended), and Pestilence was a disturbingly well drawn villain who was given enough page time to develop into a very three dimensional - if disgustingly sadistic - bad guy. Ione's style, too, one of slickly sardonic, high octane narratives and sarcastic characters who not only tread the line between good and not-so-good but dance the rumba as they limbo under it, slither over it, and gallop around it, was firmly in evidence and very appealing from about a third of the way in through, when the book started to really gel, to the end.

As a general rule, the first book of a series is rarely the strongest installment, and I imagine that will be the case with the Lords of Deliverance. Ione's writing style favors the layered, slightly overlapping episodic romantic plots seamlessly blended with the more linear series arc plot, so subsequent books unburdened by the extensive set up tend to start faster, transition smoother, and have more focus on both aspects of plot progression. All good points for an Ione junky like myself. I look forward to seeing the next Horsemen ride. 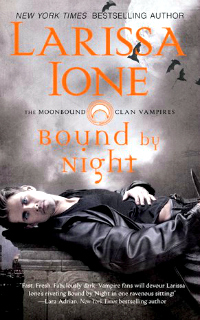 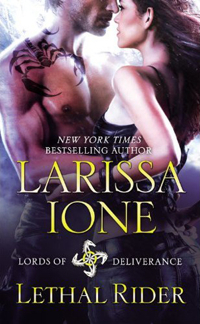 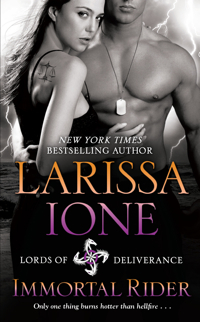 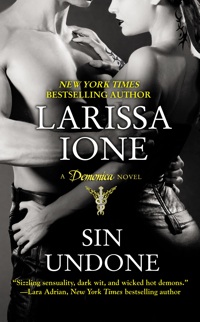 Return from Eternal Rider to One Good Book Home