Not Wild About Keri 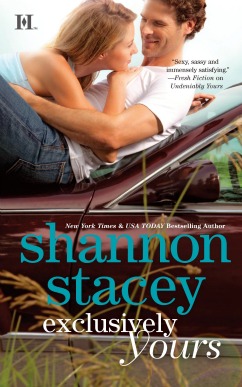 They were high school sweethearts, but when Keri Daniels shook off their small New Hampshire hometown after graduation and headed for the bright lights of L.A., it broke Joe Kowalski's heart. In the eighteen years since, he's still the standard to which other men are measured, but the highly paid entertainment reporter is a California girl now and has been for a long time. Memories of Joe are fond, but she's always been more interested in her career than in sentimental romance. And if it weren't for her bulldog of an editor, memories of him would be all she'd ever have to worry about.

Unfortunately, Joe Kowalski is now a best-selling and extremely reclusive author and Keri's editor has found out that Keri and Joe were an item way back in the day. Now Keri's job depends on her getting an exclusive interview...with the one man in the world least likely to be thrilled with the idea.

When Joe finds out that Keri is back in town, asking around for his phone number (gotta love the small town grape vine), he knows instantly why she's trying to find him. He's been dodging her editor for years, and has been expecting the day to come when she'd find out that he and Keri had a past. But Keri is his past and Joe has no intention of giving her an interview.

Problem is, when they meet for dinner so he can tell her that, he instead finds himself proposing a ludicrous challenge to his old flame. If she comes on a family camping trip with him and his parents, brothers, sister, and all their respective spouses and kids, he'll answer one question a day for every day she participates in family functions.

She can't say no, she's loathe to say yes, and her future is now dependent on her past.

There was quite a lot to like in this book by Shannon Stacey. There was a fair amount of humor, as city girl Keri gets stuck in the wilds of New England surrounded by people who have plenty of reasons to be less than forgiving for ditching Joe all those years ago. Lots of room for hijinks there. But instead of sticking with the comedic tone throughout, there were also several deeper, more serious issues touched upon. Rocky marriages, separation and divorce, single parenthood, and alcoholism were spread across main and secondary characters and they were all handled believably and realistically. It added a nice dimension to the story.

I enjoyed the secondary characters, and I loved Joe. I never warmed up to Keri. I get that she's all about the city life now, but she grew up in the same town with Joe, just a couple hours from the campground where she meets up with the Kowalski clan. I would have thought she'd at least be vaguely familiar with the general area and natural environment, even if it's on an strictly academic level. And okay, I admit it, I felt the way she left Joe all those years ago made her a little unsympathetic. And I was never totally clear on her motive for leaving in the first place. Did she leave because of an identity issue? Did she leave for a career? I thought it was one, then the other was brought up, so I was never really sure. From a plotting standpoint, she never really wavered on her intent to return to L.A., even late in the book, so hooking up with Joe seemed a little shallow on her end. It was clear that Joe still loved her - always had, always would - so the seemingly one-sided nature of their reacquaintance was slightly off-putting.

Even when I look beyond that, I had a problem with her. She's supposed to be a savvy, intelligent reporter with several years experience and a job riding on the outcome of the interview and can't come up with one single probing question given the parameters Joe dictated. They weren't that limiting, or shouldn't have been for someone who knows how to be a reporter. It made it difficult to maintain a willing suspension of disbelief, and it wasted what could have been an opportunity to establish more of Joe's character in an interesting way.

I wanted to like her more, because I truly did love Joe and enjoyed every other aspect of the book. There was a lot of entertainment offered, and much of it had more depth than I'd anticipated, balanced nicely with humor. To be a completely successful romance for me, though, I have to like both the protagonists, and in Keri's case, I just didn't. Still, this was my first experience with Shannon Stacey's books and I enjoyed it enough to try some of her other titles. I look forward to them.

Return from Exclusively Yours to Contemporary Romance

Return from Exclusively Yours to One Good Book Home