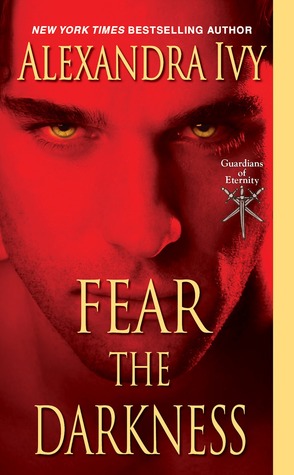 Disclosures:   An ARC of this book was provided to me by Zebra Books publisher Kensington Publishing via NetGalley. This rating, review, and all included thoughts and comments are my own.

He used to be the Bad Guy. The Big Bad of the piece. Hunted for bad acts, reviled for nefarious plans. Caine was the cur obsessed with becoming pureblood. Narcissistic, lacking conscience. Then one selfless act changed his destiny.

First, it killed him. Which, admittedly, was a bummer. Then he was reborn as a pureblood. Perk. But it also thrust Caine into an unfamiliar role: hero and protector of the most important being alive, the pureblood Were and prophet Cassandra.

Yeah, no pressure there. And that's not all. Caine is having the devil's own time keeping his hands off the beautiful, innocent Cassie. He's supposed to be her guard dog while they bounce all over the country at the whim of her prophecies, not panting after her like a sex-starved pup. That's somewhere he absolutely cannot go, no matter how his body torments him for his restraint.

His yearning is great but the stakes are high. They must focus on the race to stay one step ahead of the Dark Lord. If they fail, if the Dark Lord gets the last living prophet in his clutches, the future will be forever lost to them all.

This installment of Ivy's Guardians of Eternity series provides an example of why I tend to dislike when multiple books in a series have concurrent, non-sequential, or overlapping timelines. I can imagine it's a very tricky thing for an author to pull off successfully because I've read several series that haven't quite managed to do so. Including this one.

The first half of this book, the half that most heavily features the two main characters, Caine and Cassie, details the events leading up to and including how those two characters ended up where they were in the previous book. On one hand, that's a good thing, because honestly, I thought I'd just forgotten major plot points after such a long lag time between when I read the seventh and eighth book. On the other hand, once I realized that wasn't the case, the issue became that I was reading half an entire book knowing exactly how it was going to play out.

Not the details, maybe, but the end result. And that completely stripped any and all suspense or tension from that part of the story for me and made a couple of the elements seem a waste of time.

It did give me a chance to reacquaint myself with Caine and Cassie, which I appreciated. Still, there wasn't enough of what I was hoping this book would offer: a closer look into the nitty-gritty of a fascinating character like Caine. The psychological and physiological effects of the massive paradigm shift and major species upgrade that changed his life offers practically endless potential for character evolution and definition, but sadly I felt most of that potential went unrealized.

I like Caine. I've always liked Caine, even when he was on the less-than-straight-and-narrow, because I understood his motivations, even if I didn't approve of his methods. And remember, I hated Salvatore with a fiery passion (before Ivy made me like him, damn it all), so I was all for anyone opposing the character I thought was a hopeless, brutish thug. I just would have really loved seeing Caine's character go from Point A to Point B with a bit more of a scenic route.

Cassandra had the same sort of take-her-or-leave-her impact on me that she's had since her introduction into the series. I felt her character definition also had potential when she and Caine were in Vegas, but the story focus stayed more on their interpersonal relationship, limiting the page time needed to really dig into defining her as a young woman who's been sheltered from the world for her whole life. I never really felt I knew who she was in any substantive fashion.

Plus, I've mentioned before my preference for strong, independent heroines over damsels in distress, and Cassie was the quintessential damsel throughout almost all of this one.

Once the timeline progressed beyond the events of the previous book, this story picked up for me. I loved how the pieces of external conflict started to come together, building tension and becoming more and more intense. The Dark Lord and his minions stirring up all manner of hell, the efforts of the Vampires, Weres, and all their allies growing more and more desperate as they sustain blow after blow... All of that was great. I enjoyed what was there in the story completely.

My problem with the latter half of the book was not with what was there but rather what wasn't. Namely Caine, but to a lesser extent, Cassie too.

Once Caine and Cassie were in the mist dimension, a place we knew they had been taken as of the last book, Caine's circumstance removed him from almost the whole of the second half of the book and we only got glimpses of Cassie. Not only did that limit the impact of the characters in what is supposed to be their own story, but it completely crippled the romantic story elements for me. And the resolution of the romance story arc just wasn't enough to redeem that for me.

There is a lot going on in this book. Much of the plot-driven, external conflict is a culmination of several books in the series, and it's intense and well written and very respective of the groundwork that Ivy has carefully laid. In that regard, the book was completely successful for me. But it's supposed to be a paranormal romance, and this time there just wasn't enough romance for me to be able to fully enjoy the read.

I have this book but I've never read any of the previous ones so I'm not sure if I'll be able to jump in at this point. What do you think?

Hey, Karen,
I definitely would NOT recommend you read this book without having read the previous books. The series arc is too integral and large a part of each individual book's storyline. I think a lot would be lost on you if you started here.

Return from Fear the Darkness to Paranormal Romance

Return from Fear the Darkness to One Good Book Home