Burned and Bubbled My Patience 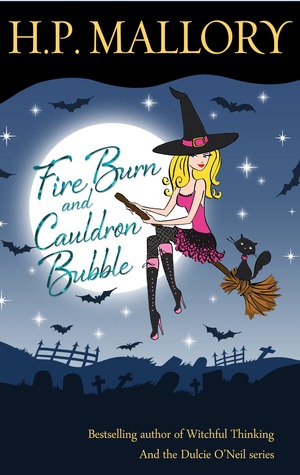 Jolie Wilkins had been content with her little life, running a shop in L.A. with her best friend Christa and using her abilities to read auras and glimpse futures to provide the business that supported them both. Then she saw the ghost - her first, actually, and soon after her life didn't resemble anything she recognized.

That wasn't the ghost's fault, at least not directly. It was more the influence of one ultra-sexy warlock Rand Balfour, who sent the ghost to Jolie as a test of her powers. And then told her she was a witch. A powerful one. She didn't believe it, of course, but when she brought the ghost back from the dead - purely by accident, really - she knew her life was forever changed. And she had Rand to thank, so to speak, for it.

Unfortunately, Jolie's gift paints a big target on her back and soon a power hungry witch of age and skill tries to coerce Jolie into her service as she gathers forces to lead a charge to become Queen of the Underworld, and only Rand stands between the powerful Bella and the timid Jolie. She has to rely on the warlock to teach her, employ her to keep her safe, and to move her from Bella's territory to his own in England. And while her previously neat little life spins wildly out of control and her attraction to Rand grows into heated intensity, Jolie struggles to get a handle on the use of her powers, as they may be the only thing that will save her from the myriad of things that go bump in the night...creatures all who seem to be out to use her as a pawn in a deadly game of war and supremacy.

Despite my appreciation for the concept of this story and the many positive reviews on several different sites, I was horribly disappointed in this book. It plucked at so many of my reading anathemas that I could have danced to the cacophony of dislikes. The heroine - and I use the term loosely - is an insipid, immature, shallow chit who cares more about how hot a guy is...even as he's holding her prisoner after she's vein-raped by a monster...than about character. She's got zero self esteem and her backbone is roughly the consistency of cold porridge. And she consistently puts herself into dangerous situations out of ignorance, pride, vanity, or idiocy. Then wonders how she could have been so stupid. Ugh.

The hero, Rand, wasn't as offensive, but his constant waffling over the boundaries he needs to maintain because he's Jolie's employer was the cornerstone of his character development and that got old even before he explained them. He wants her so very much but he won't take her - yadda, yadda, yadda. Of course, his moral fortitude doesn't preclude him acting like a jealous wanker when Jolie dates a werewolf. Still, at least he maintained an appearance of maturity.

Unlike Jolie, who while dating Trent (the werewolf), practically has a nervous breakdown and gets jealous to the point of hyperventilation of her own best friend during a double date because her BFF is so gorgeous and Trent is nice to her, so of course that means he's more into Christa than he is Jolie. Um...yeah...on the second date. And I feel compelled to mention that nearly all the male characters, including the warlock, the werewolf, a vampire, and a fairy King kept telling Jolie what a gorgeous creature she was and how they all wanted to bed her - even the ones who wanted to eat her afterward. This was not only extremely annoying in its own right, but it kept me wondering why Jolie kept comparing herself so unfavorably with Christa throughout the book.

Then again, why her BFF is included as a secondary character to begin with boggled my mind, as rarely have I read as vapid and useless a character appendage as Christa. So no, with maybe the exception of Sinjin, the characters didn't work for me at all.

Neither, unfortunately, did the plot. It would have, I think, had the subplot about the brewing conflict between Bella and Rand and the growing alliances of both been a larger part of the story. But it remained a subplot, and instead over sixty percent of the book focused on Jolie's emotionally immature actions and reactions to the changes in her life while not actually expounding on those changes.

Even after she moves to England and starts to train her magic we see her life through chapter-long vignettes of social dates and angsty confrontations between her and Rand; the same angsty confrontations again and again about whether they will or won't have sex and what it would or wouldn't mean. And the transitions between those vignettes are choppy and lack explanation and definition. One chapter she dates Trent. Another she double dates with him and Christa and another werewolf. There's a chapter in which she meets other werewolves who've fled Bella and moved to England. Then Trent dumps her - which we're told of after the fact while Jolie and Christa are getting ready for girls night to tie one on. It was all so disjointed and segmented it didn't read like a smoothly developing narrative building towards a satisfying conclusion at all.

There's more than one reason for that, too. It didn't actually have a conclusion. No, it just cut off after a conflict that was ancillary to the main conflict of the impending war subplot. I would call it a cliffhanger...but the preceding action hadn't climbed nearly so high as to warrant an actual cliff. Perhaps a hill-hanger. Ant hill. And normally I loathe cliffhangers. This one didn't bother me so much (I was sorta just glad it was over), though it did further cap my disappointment.

To be honest, I did find the last third of the book more palatable than the first two-thirds. The narrative smoothed out quite a bit and the story started to delve a little more deeply into the characters actions as they were happening instead of that choppy vignette style. And the plot threads were more centrally focused around Bella's antics and nastiness instead of Jolie's romance angst. There were even some relatively pleasant surprises sprinkled here and there. It was too little too late for me, and Jolie wasn't redeemed nearly enough for my tastes to really improve my overall opinion, despite her evidence-bereft proclamation to the contrary, but at least I stopped wanting to shatter my Kindle against a wall.

I know this book has achieved quite a lot of popularity and garnered much praise, but there were just too many of my personal dislikes running rampant in this one. These things happen. I wish H.P. Mallory all the luck in the world with her series and hope future books continue to entertain. For me, though, there was too little payoff for the investment of time and money and too little about the story that was even tolerable. I also want to caution those who are expecting a paranormal romance, as it claims to be on the cover, because that is not the impression I got as I was reading, nor was it how it seemed upon completion. There may be a romantic resolution for Jolie and Rand one day, but that day was not seen in this book.

Return from Fire Burn and Cauldron Bubble to Urban Fantasy