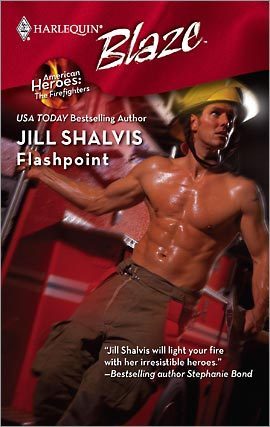 Firefighter Zach Thomas felt the sort of attraction to New Hire Number Seven (also known as EMT Brooke O'Brian), that sparks blazes, and getting the buttoned up beauty to loosen up a little becomes his goal when he's between fires calls. A pretty young woman in town for a six week duty before she moves on seems perfect for the no-strings-allowed Zach. And that thought sticks with him...right up until he gets his first taste of Brooke and realizes with startling, sinking clarity that there's no way that one time only will be enough to put out his fire for her.

In town to settle and sell her recently deceased grandmother's house, footloose and rootless Brooke feels an instant connection to the house and the town of Santa Rey, California, and her first sight of the mouthwatering Zach Thomas leaves her hungry for more. It's not until Brooke finally lets her hair down with the sexy Zach, though, that she realizes that despite the one time only assurance she got from him, the conflagration between them is anything but contained, and for the first time the thought of leaving a town...leaves her cold.

As a serial arsonist ups the stakes and town politics keeps Zach from the investigation, the relationship between he and Brooke starts to burn out of control. If they're not careful, the next fire could flash over them both, leaving their hearts scorched and their lives forever charred in its aftermath.

Hot, fast, and sexy, this Harlequin Blaze by Jill Shalvis burns up the pages, but beneath the heat and the delicious chemistry is enough depth and character definition to satisfy me more than I was anticipating. Zach and Brooke were great together, and despite the shorter length Blaze novel, they were given enough backstory and development to be realistic and sympathetic.

I appreciated the arsonist plot thread, which added a nice layer of suspense, added a pleasant amount of pressure and conflict, and gave the story some balance. It was well conceived and developed nicely as the book progressed. That, along with a few ancillary plot threads surrounding secondary characters added much to this fiery little gem and made it far more robust.

I did feel the ending was a little abrupt and there sure were a lot of plot threads left dangling. I hadn't realized when I first read it that there is a follow-up book by Shalvis, Flashback, that picks up where this one left off, more or less, and features Zach's partner Aidan as the lead male character. Hopefully there are some answers to the many questions that were raised in Flashpoint, because while the romance between Zach and Brooke felt complete, the subplot of the arsonist definitely did not.

There was also quite a bit of repetition in the narrative concerning Brooke's feelings about her grandmother's house and the town. Her previous rootlessness and current growing attachment to the house, the burgeoning feeling of belonging, and the too-oft repeated fact that she's leaving at the end of the job (and we all know what that means) seemed to be on an endless loop that started to become distracting well before the midway point.

The sexual tension between Zach and Brooke, on the other hand, was exquisite as it was slowly brought to a boil and poured out over the pages with steamy intensity. I loved that aspect of the book, and was impressed by Shalvis' ability to stoke the fire, keep it hot and tense, and follow it to its natural, incendiary conclusion without once slipping. Zach and Brooke were total scorching reaching enjoyment for that reason alone. I enjoyed them, and look forward to seeing what Aidan has to offer when it's his turn.

Return from Flashpoint to Contemporary Romance

Return from Flashpoint to One Good Book Home