For Her Eyes Only 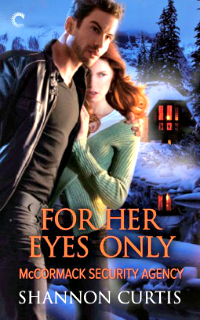 When the father of a good friend is murdered and her friend is viciously attacked, MSA operations manager Vicky Hastings is determined to have her first field assignment be the undercover investigation that will identify and catch the perpetrators. There's just one small problem. Her partner for the mission is Ryan Brennan.

Okay...the MSA agent and undercover specialist is not a small problem. Sinfully sexy problem, yes. Small, no. Unfortunately, the gorgeous but frustrating man sees her only as a friend and is completely dismissive of her talents and her contributions to the agency. He's none too thrilled with the idea of being her partner on this assignment, either.

Well he'll just have to suck it up and deal with it, because Vicky is determined to catch the killers and gain Ryan's respect as a valued member of the MSA team. She just hopes she doesn't die trying.

There were things I liked about this third installment of Curtis' McCormack Security Agency series. Despite a limited amount of exposition to set this book into the series and a perplexing setup for the plot conflict (why was a security agency doing what police are supposed to do?), the story starts with a vicious killing that sets the sort of dark, edgy tone that I like in romantic suspense, and there's no doubt that the killers are Bad Guys riding the Crazy Train. That worked for me, as did several crafty, well-conceived and executed plot points in the suspense thread. Overall, I was surprised and pleased by the big picture of the conflict when it's finally revealed late in the book as it reaches its climax.

There were also elements of the romance that amused and charmed, and the cute, sometimes goofy, sexy heat between Vicky and Ryan made up for some of the less favorable points in their relationship. Despite a hearty dose of emotional immaturity on both their parts, and the confusing, difficult-to-believe premise of friendship between them (I never bought that setup, no matter what they said), they sort of worked for me as a romantic couple.

Unfortunately, the lighter tone of their relationship was at such odds with the severity of the opening sequences and the seriousness of the suspense, that I found the two elements jarring when taken together in context. Instead of blending and weaving together cohesively, the suspense threads and the romance threads never came together for me and ended up feeling very disparate throughout the book.

And I'm sorry, but I have to vent. When you and your partner have just found a viciously assaulted young woman bleeding out and dangerously near death, then you have to toss the dying woman over your shoulder to race away from the scene before the bomb that was planted kills you all, the very last thing on your mind should be the fine bum of your friend/partner.

I think Ryan having to tell himself not to stare at Vic's ass mere moments after bearing witness to horrific brutality and nearly getting blown to bits was supposed to be cute, but to me, it was so completely inappropriate in the moment that it didn't give me much of a first impression of Ryan's character.

That situation wasn't helped by the borderline incompetence and lack of professionalism evidenced by Vicky and Ryan once they were undercover. The whole premise of them going undercover as a married couple was a pretty heavy-handed and overused romantic suspense trope to begin with. And once they've inserted into the scenario, they spent so much time bickering at each other and flagrantly one-upping each other with ridiculous cover story that the investigation got lost in the shuffle.

I was also a little unhappy with Vicky's naiveté, nerves, and discomfort with Ryan's proximity once they were under. For someone who fought so hard to get where she was, claiming over and over that she was ready and more than able to do the job, desperate to prove herself, she came off as a complete powder puff at crunch time, or worse, a very disappointing gender stereotype.

Truth is, though, for me it was really all about the tone. Because of how the story started, the lighter elements weren't as successful for me as they could have been. On their own and in a different setting, I could really have enjoyed the romance arc and would have had more patience for the characters and their quirks.

Had the lighter romance been more in line with the darker suspense threads, this could have been a very solid read for me. As it is, the disparate pieces just didn't quite fit right. There were good points for sure, just not enough of them to elevate the story as a whole.

Return from For Her Eyes Only to Romantic Suspense

Return from For Her Eyes Only to One Good Book Home