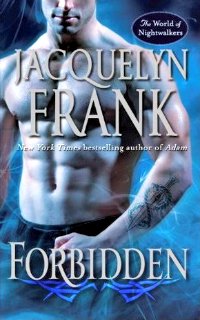 Series:   The World of Nightwalkers, Book 1

Docia Waverly's last thought as she went over the bridge and plummeted to her death at the hands of an unknown assailant was a fervent hope that her body would be carried downriver and out of her brother's police jurisdiction. She never doubted she was going to die. No one survives what the stranger in the SUV did to her.

Turns out, she was right...and wrong.

Docia wakes up in the hospital with no idea why she was targeted and no clue how she survived. And the second attempt on her life was no less a surprise. This time, though, a huge, stunningly gorgeous stranger steps in to save her. Definitely a much less painful way not to die. But then Docia's world takes an even more surreal turn. Hot Stranger Guy keeps referring to her as his queen - how weird is that? - and tells her that she's not Docia any longer...or, not just Docia.

The guy, and really, he's got to be completely off his nut, more's the pity, spouts off about being her guide and protector, then something about a transition period, whatever the hell that is. Frankly, Docia is a hairsbreadth away from freaking right the hell out. Especially when he and his doubly huge and far less pleasant friend kidnaps her.

Wait...is it kidnapping if she goes with them to protect her brother?

Ram, skilled warrior and right hand of the Bodywalker king, Menes, is tasked to protect Docia and the slowly transitioning queen of his people who now shares her body. The feelings she stirs in him, however, make him feel traitorous to his king, who loves his queen above all else.

With the war between the Politic he serves and Templars he loathes heating up, and all evidence pointing towards a growing crisis of nightmare proportions, one prophesied to unite...or destroy...all Nightwalker kind, Ram can never act on his startling emotions. To do so would violate his honor and his centuries-long fealty to his king. And risk the lives of the thousands who depend on him.

When I first started getting into paranormal romance, it was Jacquelyn Frank's Nightwalkers series, along with a handful of other now-classic PNR series, that really lit the fandom fire that has endured for so very many years. Still, it has been a long time since I've read a Frank book. I wasn't crazy about the Shadowdwellers series debut and I never got around to picking up the books she's written since, but I was excited to hear about this Nightwalkers series spin-off and had high hopes that I would be able to embrace another equally beloved series.

It wasn't the story that bothered me. Or the characters, either, really. I still love this world, and was especially tickled by the prologue that opens this book. It was like a short, fun visit with long-lost friends. I also thought Docia was a good heroine, feisty and loyal and strong, and Ram was as brooding, hot, and sexy as any of my favorites of Frank's leading men.

The myriad shifting points of view in the narrative and sheer number of characters who were featured in them didn't thrill me, but they weren't a deal breaker. I loved Docia's brother Jackson and thought his secondary storyline fraught with emotion and intensity. It was a nice complement to Docia's and Ram's plotline. Enough so that I didn't mind so much shifting focus from the main couple to his storyline, even though I do think it hampered the fluidity of the read a bit and prevented the main characters and their storyline from reaching their full potential.

Unfortunately, though, I had a huge problem with this book that no amount of deft writing, lovable characters, or imaginative storyline could overcome. I hate the concept of Bodywalkers as a race and detested the mythos surrounding them. Everything about them either freaks me out, makes me uncomfortable, or just isn't to my taste.

The idea of sharing a body with another person, willingly giving up your individuality, the very essence that makes you unique, to blend with another soul...one personality subsuming the other (yeah, that whole concept of "blending" didn't quite cut it for me), just gives me a major case of the wiggins. Absolutely everything about it disturbs me on a very visceral level.

I don't know why...and maybe I'm weird for feeling that way...but there it is.

Egyptian mythology and history isn't really my thing, either, but it's definitely a change from the plethora of Greek and Roman elements in the genre, so I couldn't complain too much about that, but I just could not reconcile myself with the concept of Bodywalkers and their...parasitic existence. To me, that just seems like giving up your core self to allow some random traveler to hitchhike in your body.

And on top of that, instead of having two people involved in a romantic relationship, you've got four separate personalities. I don't even like ménages à trois in my romance fiction. The whole thing was all a little too Sybil for me and pushed me way past my comfort level.

I so wish I didn't have to say this; I was completely looking forward to this series. I'm afraid, though, given what I read here, this spin-off isn't going to be for me. I know this book wasn't, despite the many good points it did have. Damn it.

Great review. I was tempted to read this book but the things that bugged you would have completely turned me off. Ménage isn't an issue but just the four personalities in one relationship this way doesn't interest me at all. It's a shame because the Egyptian mythos is attractive.

Thanks, Jonetta! Yeah, the whole mythos of Bodywalkers really did me in. I was so disappointed, because like I said in the review, I was truly looking forward to this series. If you ever do decide to give it a read, regardless, I'd love to know your take on it. :-) Thanks for the comment!

Return from Forbidden to Paranormal Romance

Return from Forbidden to One Good Book Home