Forever and a Day

Full of Highs and Lows 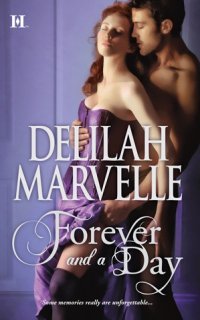 Disclosure:   An ARC of this book was provided to me by HQN Books publisher Harlequin via NetGalley. This rating, review, and all included thoughts and comments are my own.

It was an innocuous meeting. One tall, exquisitely dressed gentleman speaking to one fiery-haired woman on a random street during a random day. Though it was obvious that they were of vastly different stations in life, Georgia enjoyed the gentleman's precise English accent and his handsome face. She was enough of a realist, however, to not trust the gentleman's intentions.

After all, what would a man of his obvious wealth want with a widow of her obvious lack of same except for the obvious? And not a chat over a cup of tea as he had oh-so-politely suggested. Georgia is a pride-rich but money-poor working woman of New York and knows the way of things. She makes her money through physical labor that does not include selling her body, thank you very much. And even if he wasn't trying to buy her time, he was definitely trying to charm his way into her.

If it wasn't for that thrice-damned thief who stole her bag after she'd bid the gentleman a polite but firm good day, or the gentleman's own sense of chivalry as he chased after the lout, Georgia would never have seen the man again, she was sure. But then the stranger ran out into a dusty intersection and was struck down. He was badly injured for her sake, and as impetuous as the action may have been, she couldn't just abandon him to an uncertain fate.

Georgia gets him to the hospital. She harangues the doctor to make sure he's sufficiently cared for. Problem is, she has no idea what his name is, and when the gorgeous stranger finally regains consciousness, neither does he. In fact, he has no recollection of who he is or where he's from, and what he does remember isn't real.

Burdened by her own sense of responsibility, Georgia does what she feels is the right thing to do, even knowing the risks. She takes the man who calls himself Robinson to her home. No doubt, when his memory returns, she'll pay for the indignity. And in more ways than one, for though he may not recall his past, his presence in her present is rocking Georgia to the core in a way that no man has since her husband passed. And that may be the most dangerous risk of all.

This series debut by Marvelle was a mix of highs and lows for me. I absolutely adored seeing a historical romance set in New York City, and applaud the work that went into the delightful authenticity of the setting. I soaked all of that up like a sponge. The medical conditions of the era and the limited understanding of the brain's intricacies were wonderfully realistic to the times. Also, I loved seeing a member of English nobility taken out of that world and put at the mercy of Georgia, who, for all her wit and pride, is a common woman of her time.

Less appealing, however, were elements of the story itself. While I have no problem with the amnesia, which may have been convenient but was also very well done, the depth of feeling between Georgia and "Robinson" bloomed way too fast for me. I could've embraced lust in that time frame, especially as the attraction had already been established, but love and an unwavering desire to be together forever has to take longer than forty-eight hours to be believable to me. When it doesn't, the entire romantic arc of the book starts to crumble.

The story also suffered from a rather large and slightly odd section of information dump in the middle that related directly to Robinson getting his memory back. I wish the story had split all that up a bit and doled it throughout the story, however that could have been accomplished, so it wasn't quite so overwhelming and didn't put the pace of the plot on hold as much as it did.

Then there was the issue with the characters. As much as I adore strong female leads, Georgia's personality strode over the line of strength and right into strident and querulous. She wasn't just independent and tough, she came off as a shrieking harpy in places. Much less appealing.

I adored Robinson for several reasons throughout most of the book, though, even when I thought it irresponsible of him to make unwavering promises before his memory returned. Like I couldn't see the inherent problems with that coming a mile away. I became much less enamored with him, however, when he assumed the role of king of his relationship with Georgia and started making decisions for her and on her behalf.

I can't begin to express how much I dislike that too-often seen habit of a character martyring himself (or herself) and/or the relationship for the good of his (or her) partner...without, of course, any actual input from said partner. After all, one wouldn't want to actually respect and value the thoughts and feelings of the person you claim to love enough to let them have a say in their future. I find that so remarkably insulting, and tedious as hell in romance novels.

Georgia's reaction to it was full of moxie, though, and delightfully Machiavellian, I'll give her that. It wasn't to my personal taste, as I would have preferred society not be allowed such power and it seemed to be a...loss of her character in a way, but I did respect her accomplishments. Because I did, though, I felt Robinson...now Roderick Tremayne, Duke of Wentworth...got better than he deserved faster than he should have. More grovelling. He definitely needed to do more grovelling.

The highs and lows from all of that made the book an uneven read for me. The parts I enjoyed were very well done and totally entertaining, and the parts I didn't either annoyed me or had me rolling my eyes in frustration. And it was definitely one or the other. There just wasn't much in the way of middle ground at any point of the tale. The elements that appealed the most, though, do bode well for the future of the series.

Return from Forever and a Day to Historical Romance Genre

Return from Forever and a Day to OGBDA Book Reviews Home