Cute, Fun, and Oh So Sexy 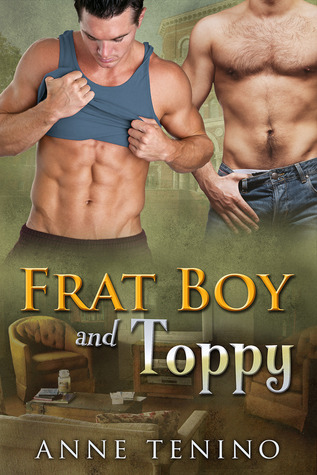 Disclosures:  An ARC of this book was provided to me by Riptide Publishing via NetGalley. This rating, review, and all included thoughts and comments are my own.

As far as paradigm shifts go, consciously realizing you're gay because your fraternity brother's naked bum looks like something you'd want to tap is fairly conclusive. Up until that blinding moment, Brad had never let himself think about why the girls in high school and college have never really done it for him. Not that he didn't try lots of them out. He did. So many, in fact, he feels bad about it.

Especially now, when it's finally become so clear that he was just hiding from his sexuality, and if anyone treated his sisters like he's treated women in his past, he'd kick their asses. That is one humbling revelation.

So, okay, he's gay. He can deal with that, he supposes. He has no idea how he's going to come out to his fraternity, though. Not the frat who practically worships at the alter of booze and gives medals for chick boffing. It sucks that he was so good at building up his jock reputation all these years. He doesn't even particularly like playing football.

He does, however, like Sebastian. Sexy Sebastian, TA for Brad's history class, is one put-together, good looking, openly gay man. Just watching him as he reads essays, wearing glasses that add a whole other level of academic hotness to his appearance, gets Brad's blood flowing - and all of it southward. Now that he's finally embraced being gay, there is no doubt who he wants to embrace first. But getting Sebastian to notice him is a whole other issue.

Sebastian is a little bit of a snob when it comes to the third year history students. They're not serious enough about the subject to warrant him learning their names before the end of term. So he doesn't. Except for Brad, anyway. That young man is definitely too hot not to pay all kinds of attention to. Between that gorgeous jock body and those cheekbones of his... Yeah. Pity he's straight, because Sebastian would totally do him.

Except Brad approaches him one night after a party and gives Sebastian his own personal paradigm shift. No way is Sebastian not taking the guy up on it. But no matter how out of the world the sex is, Sebastian is afraid Brad is going to fall for him. And that is going to be a problem, because Sebastian doesn't believe in love. Doesn't even know what it is.

Well, hell. Obviously I haven't been paying close enough attention, because my first experience with author Anne Tenino is by no means her first book. Using this little gem as a yardstick, I have definitely been missing out!

I loved Tenino's authorial voice. It's got a lovely a mix of witty sarcasm and tongue-in-cheek humor that always appeals to me. It comes through with wonderful clarity in the narrative and imbues both Brad and Sebastian with a sense of lighthearted sexiness that keeps this story far from any significant amount of pathos or angst.

I really enjoyed seeing a coming-out tale that wasn't mired down by a bunch of emotional dreck. There's certainly a place for the serious, emotion-pummeling stuff. I have enjoyed many a thoughtful, heartfelt, intense M/M read, but I also love getting a healthy dose of temperature-raising smutty goodness with lots to chuckle about besides. And that is exactly what Tenino offers readers with this one.

From first moment of Brad's self-revelation all the way through to the frat boy's coming out announcement there were tons of scenes that just tickled me to no end. I was especially fond of Brad's discussion with his family and the scene in which he catches Kyle up on various options for gay sex. All the scenes between Brad and his sisters and Sebastian with his were also big hits.

And I adored Collin. He was a scene stealer from the...well...very first page, actually, but his character also allowed for a wistful poignancy and a touch of seriousness to balance out the rest. I am dying to read his story.

The tale definitely stays closer to the surface as far as story depth and complexity goes. There's not a lot of conflict - neither internal nor external - and everything progresses rather quickly. What conflict does exist is resolved without any significant trauma or is handled with a sharp eye for the lighter tone of the story.

Neither main character has a ton of depth or dimension, just enough to flesh them out a bit and individualize them. Most of the story evolves from Brad's perspective, so his character feels a bit more robust than Sebastian's by default. Both he and Sebastian are likable, though, and both are defined enough to keep them from feeling cardboard. This just isn't the sort of story that provides any deep character studies or sweeping emotional sagas.

It didn't need to be. It entertained me by being no more or less than exactly what it is, an erotically-charged, fun, light read. It is chock full of cute moments, richly flavored with amusing moments, spiced up with scorching hot moments, and even, when you include the end, touched with sweet moments. I enjoyed it a lot.

Return from Frat Boy and Toppy to LGBT-M/M

Return from Frat Boy and Toppy to One Good Book Home