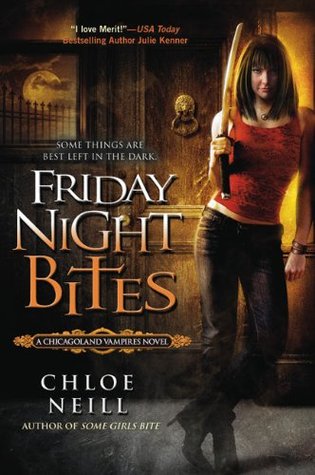 Some Girls Bite is on my list of surprise gems in 2009 as a unique urban fantasy with a heroine I could really root for and a complex and intriguing world that deals not with world-ending cataclysms but the sometimes deadlier vampire politics and machinations. It was a lesson in the delicacy of balancing a history of vampires that include a feudal-style house structure with characters who have closer ties to frat houses than feudal houses. It was taut, cleverly paced, and while I maintain it was a wee bit slow to start, it was ultimately satisfying.

I like Merit. A lot. She's not an ass-kicking, leather-wearing, gun-toting female warrior (not that there's anything wrong with guns, leather, and ass kicking, but Merit's a nice change); she's a flawed, slightly neurotic, highly educated and intelligent former debutante turned scholastic book worm...and a katana-toting female warrior-in-training whose benefits as Sentinel of Cadogen House include access to Chicago's muckety-mucks for house master and liege Ethan Sullivan and an unerring ability to sniff out complex plots made by sociopathic megalomaniac vampire villainess Celine.

And speaking of complex plots - Friday Night Bites is deliciously laden with them. Where Some Girls Bite spent time introducing you to the world, characters, and overall issues, Friday Night Bites drops you back into the world running, with conspiracies, plots, conflicting emotions and growing pains of every sort. Chloe Neill has shown herself to be particularly brilliant at realistically maturing a layered, meaty cast of characters (most notably heroine Merit), and while as a reader, some aspects of that maturing are just as painful and frustrating for me as they are for Merit (e.g. the emotional tug-of-war between Ethan and Morgan, and the secret Merit is keeping), my emotional investment into those things just serves as kudos to Neill - if it weren't written so darned well, I wouldn't care so darn much.

I'd put off reading Friday Night Bites after the pure enjoyment of Some Girls Bite because I was counting on a good read and I wanted to draw out the anticipation a bit as I knew a third installment wouldn't be quick in coming. With a release date of July 2010 for the third book in the series, I almost wish I'd waited longer, because it's going to be a long seven months to get a chance to tie up some devious teasers and cliff hangers. Darn it.

Excellent read, though - so much so I may just start all over again from the beginning before the next book - and I could count on one hand the number of times I've done that.

great review! i read the first two books in this series last year so i've had to wait AGES for twice bitten. can't believe it's finally coming out next week! hoorahhhh

Thanks, Jane! I'm so glad you think so. I've already pre-ordered Twice Bitten and can't wait to get a crack at it. As soon as I finish my current read, I plan on going back to Some Girls Bite and Friday Night Bites before next Tuesday. The two things that are most appealing to me about this series is that I actually like Merit (that's shockingly uncommon in the genre) and I love the way the author has written the tension between Merit and Ethan. It reminds me of the delicious tension between Kate Daniels and the Beast Lord Curran in Ilona Andrews' fantastic series.

Thanks for following One Good Book Deserves Another. I'm just getting started and still have a LOT more material to add, so I hope you enjoy tooling around on it. I'm also always willing to listen to ideas and comments, and will always try to respond - even if there's a review you DON'T agree with, or something you'd like to see that I don't have yet. Enjoy the blog, and happy reading!

Return from Friday Night Bites to One Good Book Home