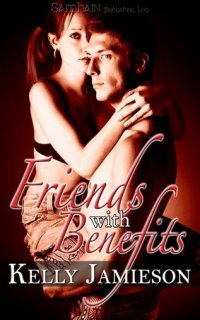 Yoga instructor and business owner Kerri Harris and divorce attorney Mitch MacAuley have been best friends for years. Only friends. But when Kerri and Mitch are out one night sharing a friendly drink, she tells him she wants to marry and asks Mitch to introduce her to some single, eligible men. There's nothing Mitch wouldn't do for Kerri, but her request bothers him. A lot.

As she starts to date the guys he reluctantly introduces her to, he gets more and more uncomfortable and tension rises in their friendship. Soon the friendly quips between them that used to be teasing fun take on more bite and a decade long friendship goes from smooth to rocky. Tensions and tempers rise between them. Pushed to the brink, a fight between them ends in a kiss - a wild, tempestuous kiss that changes everything...but solves nothing. Can two friends accept the fact that they're made for each other or will the differences between them kill their friendship and destroy the chance for love?

Despite the fact that the friends-turned-lovers theme is one of my favorites in contemporary romance, I had way too many problems with this book to be charmed. The plot was two dimensional and predictable, the narrative lacked sophistication, the dialogue lacked conversational flow, and the characters lacked charm.

The characters were the biggest problem. More specifically, Kerri. Mitch had little to recommend him as a romantic lead, but he wasn't overly objectionable, despite an unhealthy anger management issue or two. Kerri, on the other hand, I found to be utterly contemptible. She blames Mitch for everything that goes wrong in their relationship, takes no responsibility for her own actions or feelings on any matter, flits between wildly contradictory emotions at a blink, is pathologically immature, and is grievously self involved. I may not have warmed up to Mitch, but I actively disliked Kerri.

The romance started to improve towards the end, but ended up floundering when the dialogue took a turn for the worse. Two comments in particular stick in my mind, at the turning point for the relationship between Mitch and Kerri, Mitch says the following:

"I want to be with you, and most of all, I don't want anyone else to be with you.You think you need a husband? Fine, then - it's going to be me."

"You want kids and I want them to be mine. Nobody else's."

Neither one of those comments come anywhere near my idea of romance, nor do they inspire a lot of confidence in the relationship. Mitch comes off seeming less interested in being with Kerri because he loves her and more interested in making sure that she's not with anyone else. Admittedly, these comments are taken out of context, but they provide examples of the problems I had with the dialogue.

Return from Friends with Benefits to Contemporary Romance Genre

Return from Friends with Benefits to OGBDA Book Reviews Home