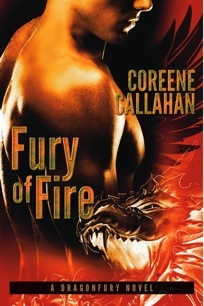 Disclosure:   I received an ARC of this book through the Amazon Vine program on Amazon.com. This rating, review, and all included thoughts and comments are my own.

When nurse practitioner Myst Munroe gets to the front door of her last house call of the night, she's horrified by what she sees through the window. The young pregnant woman she's been caring for is in labor and bleeding out on her kitchen floor, so near death that getting her help is out of the question. Myst has to face a horrifying decision, one that may save at least one of the two lives close to sputtering out as she watches.

Bastian, head of the Nightfury clan of dragon shifter warriors, has been waiting for the birth of the Razorback rogue's child. When he gets word that an ambulance has been dispatched to the human mother's address, he races to the human's home with his right hand warrior, Riker. He is poleaxed, though, when he walks into the home and sees another human female, her energy incandescent to his senses, cradling the child to her chest. In that blink, Bastian knows that this strange female is his. And in taking her, mating with her as his kind does, he will ultimately cause her death.

Myst is caught in a nightmare from which there seems no escape. Having to remove a baby from his dead mother's body is bad enough. Then when she turns to the newly arrived EMTs to help her with the newborn, they're all attacked by creatures out of some twisted fantasy novel. What she sees short circuits her synopses and alters her world forever. Dragons. They're attacked by...dragons! And the men she thought were EMTs change - grow horribly - and become dragons, too.

Trying to flee with the newborn gets her face to face with a creature out of the depths of hell, but Myst is determined. Problem is, once Bastian and Riker dispatch the squad of rogues who come for the child as they had, Bastian is hot on his female's trail. There is nowhere to go that he can't track her, and when he finds her and the child, he lifts them both up...with her car...and flies them off to his clan's lair.

As petrified as Myst is by the past several hours, she refuses to be a prisoner, no matter how drawn to Bastian she may be. She plans to escape with the baby at the first opportunity. Whether or not the huge dragon with all the attitude will give her that opportunity, however, is anyone's guess.

There just aren't enough dragons in paranormal romance. It's a shame really, because dragons and gargoyles are two of my favorite supernatural beasties and I think they're sadly underrepresented in PNR and UF fiction. When I stumble across a series that features one or the other, like this debut by Coreene Callahan, I can't help but give it a try.

In Fury of Fire, that compulsion turned out to be mostly a good thing. Callahan has created a nice world for her dragon-shifters. I didn't get as much world-building or as detailed an explanation of the mythos as I would have liked, and some elements were glossed over entirely, but what's there is enjoyable. I wish the history of the dragons had been introduced into the story a little earlier, details about their race fleshed out more and sooner, but for a series debut, what's there isn't bad and it at least sketched out both the troubles of the Nightfury clan and the larger issues with their entire race.

The war waging between the Nightfury (good guys) and Razorbacks (bad guys) gave me a few problems, most of which were relatively easy to wave away with the thought, "unrealistic, all things considered, but I'm willing to overlook it if the action is high and the romance is hot enough." Believe me, that's a necessary occurrence in most paranormal romance I read, so I'm pretty okay with that. And on the good side, the action was totally high octane and descriptively written, making it very easy to visualize - always a good thing for me.

Character definition, and by extension, the romance arc, were a little more of a problem. It's not that I didn't like the characters, exactly. Bastian was a fairly prototypical romance hero of this subgenre and one hell of a warrior with some definite combat advantages, but man...there are some pretty horrendous stumbling blocks in the relationship between him and Myst. I really wish he'd dealt with them in a less selfish, more honorable manner. I just couldn't quite get over the idea of claiming a mate you believe is going to die during childbirth when you have every intention of getting her pregnant in a few days time. That's particularly cold, man, regardless of how it all plays out.

Myst annoyed me. And I can't even totally blame her for it, really, which annoys me even more. She spent so much of the book with an eye on escaping Bastian and getting back to her life, though, that any threads of romance and any attempt at relationship evolution flat-out failed for me. Given that the events of the book take place over a handful of days, her thoughts, fears, and actions make sense as far as realistic human reaction goes, but it sorta sucked in relation to fully satisfying PNR romance. It's the classic double-edged sword of this particular genre and frankly, I've read other series that deal with it much better.

Secondary characters lacked a level of individuality and presence, but the bad guy was pretty well represented, as were the plot threads that featured him. I can't say I was totally thrilled with the manner in which the point of view shifted throughout the story, it provided too much distraction and limited the romance. I do think, though, that it added some very nice layers to the plotline of this series debut and provided a fairly wide base on which the series can be built.

Fury of Fire wasn't completely successful to me as a multifaceted and engaging paranormal romance, but it was one of the better series debuts I've read recently and there is tons of potential for future books. It's similar in style and tone as the series of some of the masters in the genre: Ward, Kenyon, Showalter, Adrian. That might be a negative to some. It's not to me. In fact, I consider it a positive, because the characters and the storyline are unique enough in this debut to stand the book up on its own merits and the style is one that I have always found appealing. Plus, dragons! I'm looking forward to following this series into the next book.

Return from Fury of Fire to Paranormal Romance Genre

Return from Fury of Fire to OGBDA Book Reviews Home