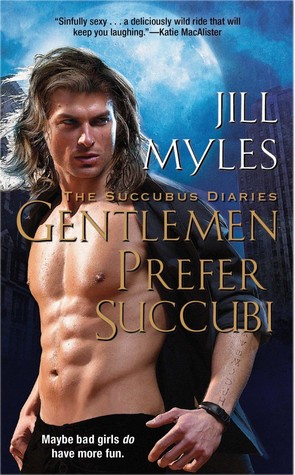 Jill Myles has managed to provide a new take on the origins of vampires and created an intriguing mythos for the fallen angels, the Serim, and the vampire/Serim love-child, the succubi. Unfortunately, Gentlemen Prefer Succubi is also a bit too brainless when fronted by the newly made succubus, Jackie. With a characterization that's a bit cliched, the frumpy museum docent (and if you don't know what a docent is when you start, you'll hear more than once that no one does, and be given the definition again and again) with all the typical overweight and under-appealing neurosis (including a prudery that's supposed to be amusing considering what happens to her), wakes up in a dumpster a full day after a confusing and uncharacteristic night of debauchery. Oh, and she's dead.

With the draining of a vampire and sex with a Serim, Jacki has become one of the immortals, a succubi, sex fueled maven at the whim of her two masters, the vampire and the Serim. She sprouts breasts and a killer bod, yet doesn't seem to be all that bright for a woman who was trying to get into an archeological field, and that lack of intelligence, wisdom, and common sense pervades even after the terrifying wake up call of angelic "dealer" and a demonic vampire queen each using her for their own questionable and nefarious purposes.

The plot to Gentlemen Prefer Succubi isn't bad. Jacki has to find the halo of one of the first fallen, lover to the vampire queen millennia ago. If she doesn't hand it over to said vampire queen, her Serim master and lover Noah will perish, if she does, the world slips into darkness ruled by true evil. If she doesn't hand it over to Uriel, the angelic "dealer", she could die, and if she does, Uriel brings the armies of heaven down to earth to fight the forces of darkness and the human race is caught in the crossfire. And Jackie doesn't even know where to find the darn thing.

I resent when a decent plot is damaged by ridiculous decisions by all concerned. That a nearly all-powerful vampire queen and an actual angel from heaven would each conscript a newly made succubi who's proven to be ignorant and vacuous into finding the piece they need to start their unholy war and quest for domination is completely ludicrous and it did more than just strain my willing suspension of disbelief. The main plot of the book fell apart on me from there.

I liked Remy, the porn star succubus friend. I liked the Serim Noah, but didn't completely buy into Jackie's supposed emotional connection and sense of loyalty to him. I could understand parts of it - the baseline concern for someone who's been nice to you suddenly at risk because you were stupid - but I didn't buy the assumption of some romantic attachment. He'd only spent a few hours with her and had sex with her a couple of times. Zane (the vampire) got a lot more face time than Noah did and I did like him - very much, in fact, and any character depth and complexity in the book was definitely centered around him through the whole of it. Again, Jackie showed off with blinding clarity her lack of common sense in relation to Zane, but Zane himself was awesome. I very much enjoyed just about everything about him. Not real sure why he had such a jones on for Jackie, though, she was a total bitch to him for most of the book based on nothing but untrustworthy secondhand information and a lot of preconceived prejudice. In fact, I just don't understand why either Zane or Noah was so interested in her after having a single conversation with the woman. Besides her kickin' rack and killer bod, anyway - and what sort of a message does that send?

I mostly feel like Gentlemen Prefer Succubi could've been much better than it was if there had been more intelligence in the main character's actions and decisions, and a bit more thought put into the development of her transformation. A more logical sequence of events that got her involved in the search for the halo would've been nice, too. A brand new succubus who has to do the deed every other day even though she's a prude and you hear about how much she doesn't want to do the deed for whatever reason all through the book, with the responsibility of the balance between good and evil on her shoulders just didn't thrill me. Gentlemen may prefer succubi (no surprise there), but I just don't know that I do.