Fun Under the Big Top 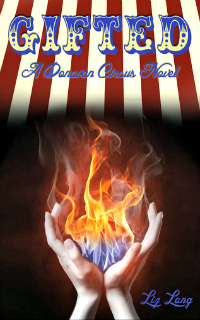 It's been twelve years since Lucy Sullivan's parents left Donovan Circus and took her to live in the human world. Her parents are gone now, both dead before their time, and Lucy wants to return to her roots...and her own kind. Donovan Circus, one of the few places in the world that shelter and provide for gifted supernaturals like Lucy, is the only place where she can embrace what she really is: a Firestarter.

She's fitting back into the circus life well enough, making friends, even met a guy she likes. Then the first body is found. One of the circus' own has been brutally murdered. And then another. And another.

As the death toll rises and panic spreads through the circus family like fire from Lucy's fingertips, it is the newbie who is blamed for the crimes.

She came looking for her place in the world, but someone is intent on burning that world to the ground around her, and Lucy is going to need all the help she can get to keep herself - and everything that matters to her - from going up in flames.

This fun, unique story by Long isn't perfect in plot or execution, but with its X-Men-meets-Ringling-Brothers theme, fire-licking suspense, and an eclectic mix of likable, memorable characters, it is a very entertaining read. To be honest, I didn't expect to enjoy it as much as I did. It's got a very New Adult feel to it, despite Lucy being around twenty-five (if my math was correct), and I don't normally enjoy either Young Adult or New Adult fiction. This one I did.

I liked Lucy a lot, but have to admit, her character was prone to a lack of maturity and a tendency towards emotional melodrama. She rocked the martyr complex way too often for my taste. Still, I was pulled into her story from the very beginning and couldn't help but admire the world that Long created here. By the end I was fully invested and rooting wildly for Lucy and her friends.

The best part of the book, I think, was the circus itself. I absolutely love the idea of Donovan Circus and its coterie of quirky supernaturals. It just totally worked for me on every level, and it put a fresh and unique spin on a well-worn genre. The whole concept of a circus of supernaturals doing their thing for unsuspecting humans was fantastic.

The plot threads of external conflict were great too, though. The mystery surrounding the deaths of the circus workers and the growing threat to Lucy tied in nicely with the lingering mysteries about her father's choices and actions before he died, and it created a solid framework of story around Lucy's re-entry into circus life. Brimming with action and danger, rife with suspense and tragedy, this was an all-around solid read.

Not everything worked perfectly for me, though. There was a love-interest triangle that did nothing for me (though to be fair, they never do). I'm so tired of the ubiquitous love triangle in urban fantasy that even the slightest whiff of one turns me off, and there was significantly more than a whiff here, especially at the end, when I was rolling my eyes at the timing of some pretty heavy-handed relationship confrontation.

Though...I do have to say...Team Gabriel. And that's all I'm going to say on that.

There were some minor technical problems in the book. As a whole the story felt a bit overwritten to me and could have benefited from a tighter story edit to trim down the superfluous and streamline the narrative. There were also a few timeline issues in the plot. It wasn't clear in places, and in other spots there seemed to be some contradictions. And I felt the pacing in the latter half of the book suffered from an overabundance of long, dialogue-heavy scenes lacking in action.

None of those were deal breakers for me, though. I liked the story and the originality of the concept to such a large degree that the weaker elements just weren't a major factor at all. This was a fun, highly entertaining, and utterly original story with a great cast of characters I heartily enjoyed. I just hope there will be another chance to stop by the Donovan Circus soon, because Lucy and her friends (and Long) put on one hell of a good show.

"It takes more than having a gift to be gifted. Otherwise you're just a person who lights shit on fire using jazz hands."

Return from Gifted to Urban Fantasy

Return from Gifted to One Good Book Home