Jack the Ripper, Steampunk, and Romance, Oh My!! 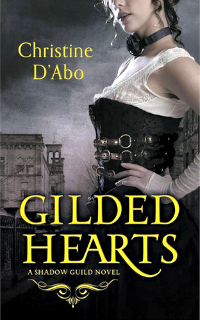 A vicious killer is slashing his way through the soot-slicked streets of New London's Whitechapel district, leaving the broken, bloody bodies of prostitutes in his wake.

King's Sentry Sergeant Samuel Hawkins has, in the course of his police work, had the occasional dealing with an Archivist in the five years since he fled their Guild, but Piper Smith isn't just any Archivist. Her arrival at his crime scene affects him more deeply than he was expecting. Once both best friend and deepest desire, Piper was little more than a girl when he'd begged her to leave the Guild with him all those years ago.

She stayed. He couldn't. But he never got over her.

Now both a fully grown woman and a full-fledged Archivist, Piper embraces her role as a memory retrieval agent for the Guild, though the shock of seeing Sam again almost ruins her first job. She's at the scene to take the memories of his murder victim, not to rehash their relationship, and focus is paramount. What she sees in the memories of the murdered woman, however, will shake more than Piper's focus, it will shake the very foundation on which she's built her life.

As more bodies are found and a deadly finger of accusation points towards the Archivists' Guild, Sam and Piper will have to take a hard look at their own past and the secrets buried there. And just hope like hell they survive it.

Sometimes you just know, ya know?

I wasn't even a tenth of the way into this book before I knew it was going to really work for me. Between initial impressions of the dark, complex Steampunk world, the grim sense of danger and mystery in the opening murder scene, and the intriguing history and emotional detritus between the main characters, the story snatched me up from the start and kept me captivated throughout.

What a world. What a dark, dangerous, well-conceived and deftly-written world. I enjoy Steampunk for the imaginative, mechanically-enhanced alternative history inherent in the genre, but have to admit, the stories themselves are hit or miss for me. D'Abo struck just the right cord for my tastes, weaving a wealth of clever Steampunk elements together with a creative twist on Jack the Ripper, and did it in such a way that it enriched the various dramatic conflicts in the story without extraneous over-description or too much superfluous detail. Everything blended together nicely to provide a robust tapestry of story and substance.

The characters themselves were as carefully and intently created, and they acquitted themselves very well in the story. I think I preferred Samuel over Piper by a slim margin, though that had more to do with my sympathy for his traumatic childhood, as well as greater understanding of the choices he made and actions he took (as opposed to Piper's) both in his past and during the murder investigations. The guy is definitely dragging around a few demons, and D'Abo was deliciously cagey about disclosing those demons to her readers, but it painted a very solid and three dimensional picture of him as a slightly flawed, definitely damaged romantic hero.

Not that I didn't like Piper. I completely did. I found her wonderfully independent, feisty, stubborn, and fiercely loyal. I just also happened to be as disturbed by the Archivists' Guild purpose and presence in the world as Sam was, so the fact that Piper was a very determined Archivist, willfully and knowingly putting holes in her mind for an alleged greater good, was a bit harder to relate to than the guy who had escaped them and went on to make a career for himself in law enforcement.

They did fit together nicely as a romantic couple, though, with a chemistry that extended far beyond sexual and included an obvious and genuine childhood friendship. I loved the snippets of their past that get revealed in well-timed flashes throughout the book. Frequent flashbacks in a story rarely work for me and tend to jar me out of the flow of the current-timeline plot, but D'Abo mastered the transitions smoothly and had a judicious eye for how and when to incorporate them to add depth to the story and the relationship between Sam and his Pip.

I enjoyed the hell out of the Jack the Ripper investigation, too, but have to admit, I got a little lost when it came to a political element in the investigation. That aspect of the world hadn't been explained quite enough for me to really understand everywhere the leads in the case took Sam and Piper. I didn't have trouble following the action, but I definitely felt an emotional disconnect with the story when it came to a few scenes.

And honestly, the resolution to the climax of the book left me feeling...disturbed and a bit unsatisfied.

Don't get me wrong, I loved the culmination of the Ripper investigation, and thought the evolution of Sam and Pip's relationship was nicely done. D'Abo built plot and relationship conflict from the first page of this book, adding layers of horror and dread, dastardly motivation and sick psychosis, and connected it all Sam's murky past in such a way that I was left impressed by the complexities and entertained by it all. I heartily enjoyed that very much.

How it resolved, though, and what it all means in the big picture, disturbed me. And it's virtually impossible to be any more specific without some huge spoilers and I don't want to do that. I will say this: I don't think there is anything right or good about the Archivists' Guild. Not one thing. That may pose a problem for me in future books depending on its role in the series. It definitely posed a problem for me at the end of this book.

It took a bit of the bloom off what was otherwise a passionate and perilous, wildly imaginative, darkly entertaining, bloody-red rose.

Return from Gilded Hearts to Steampunk

Return from Gilded Hearts to One Good Book Home