Goddess with a Blade

A Lot of Story in One Package 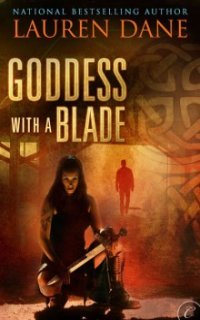 Her calling is simple: kill Vampires who kill people, thereby breaking the treaty with Hunter Corp. Her existence is...less so. As Vessel of Celtic triple goddess Brigid, she's something that has existed only a handful of times throughout history. Not human. Faster. Stronger. Gifted with a few magics. And highly trained to be very, very deadly. She is Rowan Summerwaite.

She's loathes Vampires with a singular intensity, so being called to appear before the new Scion of the city (she killed the previous one), Clive Stewart, as if she is his beck and call girl doesn't put her in a good mood. When she gets a tip about a ravaged corpse found in the desert the next night, and evidence points to a Vampire killer, her previous bad mood becomes something that sane people flee from. While screaming in terror.

Pissed off and unimpressed with Clive's blatant lack of handling - or seeming concern - over the situation, Rowan pushes a verbal battle into a toe to toe with the Vampire, slinging blame and insult with the best of them. Until a moment...one incomprehensible moment...when fury turns into something that sparks much hotter and has the potential to be even more devastating than a Vessel's calling.

Now Rowan has a sadistic and inhuman serial killer on her hands, the Vampire Nation is doing nothing to rein in their garbage, and the head Vampire in Vegas is making her girly bits tingle in ways that disturb as much as they arouse. And you thought your job was a bitch.

It's not very often that I come across a non-series urban fantasy novel. In fact, I can't think of a single one I've read in the last five years. I've read a few free standing paranormal romances, but there just doesn't seem to be many in the UF genre. Or they're actively avoiding me...but that way lies madness and paranoia.

I'm sure it's tough stuffing all the world building and character development into one book that still has to have a plot and be a satisfying read on its own merits. Dane did a fairly good job of it here, even though the book wasn't quite as long as most traditional mass market paperbacks, though it was a full length novel. There were a surprising number of strong story elements to Rowan's backstory and to the world building of the book, and while several of those elements were a little lacking in full explanation, their presence whispered a tantalizing chant for additional information that made me wish this was a series that was just getting started. Sadly, that's not the case - or at least as far as I know it isn't.

The beginning of the book gave me some trouble; I thought the first few chapters were very cumbersome and awkward with information overload that too-quickly set up the world and introduced the main characters, first to the reader, then to each other. And while that was going on, I found Rowan highly abrasive and querulous - far more so than just to a level of sarcasm or smart-ass (which I like), and firmly into the land of major bitch with a Vampire prejudice and deep hatred (which I don't). In fact, I felt that Rowan's personality was hideous through most of the book, and she was so colored by her prejudices that she was rendered virtually unlikable for quite some time as the book progressed.

I didn't have that problem with Clive, who - beyond being way too fond of the word 'vulgar' - wasn't a bad chap for a Vampire. I liked that Dane kept him morally ambivalent about humans and dismissive of their deaths should a Vampire kill them (though they better clean up after themselves), and I adore how his feelings for Rowan developed and evolved. Not the first clue why he put up with her long enough for that to happen, though, and the quickness of their initial hookup didn't appeal.

Actually, no aspect of their hookup appealed at first. I completely missed any sign of chemistry between the two of them and was a little taken aback by the intensity of their first lust-filled kiss. Even late in the book, when I felt their relationship started to click a little better, I felt like Clive was far more impacted by his feelings and invested in a potential relationship than Rowan would ever be capable of being. I admit, though, it's hard to be a huge fan of a romantic pairing when you don't like one of the characters in that pairing, so my opinion may be skewed. Rowan was a raging bitch to the Vampire through most of the book. It's hard to downshift from that.

A few other issues, like some repetitious words (I mentioned 'vulgar' - it's not the only one) and phrases heavily sprinkled through the narrative, giving it a more simplistic feel than the story deserved, as well as a spectacularly cliched moment preceding the final major conflict kept this book from being a big favorite of mine. The capitalization of 'Vampires' really got on my nerves, too.

I did like the plot of the serial killer Vampire, though Rowan struck me as a bit overzealous when referring to it. I also thought Dane has a judicious eye for secondary characters. There was just enough of them to add depth and/or conflict with the main characters or plot, not so much that they became flat and interchangeable.

The latter half of the book was far smoother than the first in just about every way, and I found myself getting caught up in the quest to stop a killer and more and more invested in the world being explored here. I wish the book was longer. Another fifty pages to better develop the whole Vessel thing, and to delve more deeply into the connections to (and explanation of) The First would have been great. Not to mention my preference for a little more rounded out romance.

I hope I'm wrong, actually. I hope Dane revisits this world she's created here and stretches it into a series. There is certainly enough plot potential, and the world building has all sorts of room to expand. I wasn't totally thrilled with all aspects of this book, but I certainly found it interesting enough to continue if Dane does ever choose to turn this into a series.

Return from Goddess with a Blade to Urban Fantasy Book Reviews

Return from Goddess with a Blade to OGBDA Book Reviews Home