First Half More Grim than Grimm 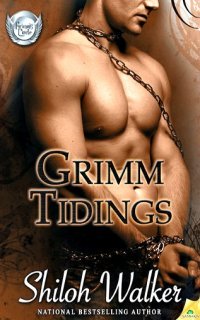 Disclosure:   An ARC of this book was provided to me by the author.

They lived as humans. They died as legends. They returned as guardians. They are Grimm...

Jacob knew as soon as he saw Celine that she was his. Unfortunately, even after four years as a Grimm, guardian angels who fight the demons threatening humanity, all Celine knows is agony over her loss and regret for the choice she made to become one of them. And she fights like she's more than ready to rectify that mistake.

Their ever-freaky leader Will wants Jacob to take over as Celine's partner in a last ditch attempt to pull her back from the edge and help her heal before she goes out in the violent and bloody blaze of glory she seems to crave. But Jacob is burdened by chains of grief and regret, and he's loathe to use his abilities on Celine, forcing her to experience even more agony in a dim hope that it will help her finally rise above her misery.

Can you ever save an angel with broken wings when her only focus is the fall?

I've been a fan of this series for so long. The concept is brilliantly unique, and I've long admired Walker's ability to create deeply emotional backgrounds and history for these fantastic characters, tossing them together with bits and pieces of fairy tales, history, and legends, and creating solid original story with a hearty dose of dark, delicious sexuality around it all. And her characters are graced with a gritty realism that extends far beyond the covers of the books they inhabit.

This one wasn't my favorite in the series. I struggled with the first half quite a lot. It's one of the shorter novellas in the bunch, and after its predecessor Locked in Silence, which may have been the lengthiest, the short length here was a detriment for me.

The setup for the plot and the definition of the characters seemed too condensed and rushed, and was chaotic and lacked clarity because of it. The potential was there, and there wasn't a huge amount of external plot conflict taking up space. The story focus is on individual character growth and relationship evolution, which is a series-standard and one for which I have no complaint. I felt the timeline of the events in the first half of this story was very jerky, though, with a confusing lack of detail, and the transitions were very abrupt. It made the story progression seem both haphazard and stilted in places.

As much as I loved my first glimpse of Rob (can't wait to read more about that crazy, red-eyed bugger), with my issues about the timeline and my concern over a lack of initial character development, the first half seemed less sleek and sophisticated than I'm used to in this series and characters' actions and emotions felt forced for a good portion of it.

At around the halfway mark, though, the story smoothed out and started to dig deeper into the characters and the evolution of their relationship. Some external plot conflict and action were tossed in, always appreciated, and Rob was added back into the mix. The sultry sexuality that highlights this series also made an appearance - and none too soon. I enjoyed all of that very much, and felt the book settled in nicely from that point on.

For as much as I struggled with the beginning, the second half entertained me. I had a few minor issues with the relationship conflict and subsequent resolution, as there were one or two elements in them that felt a little too similar to events in the previous book, but that didn't prove too much a detraction.

This series is far more episodic than firmly connected by an overall series arc, but I enjoy reading them in order. Plus, I've noticed a subtle increase in demon activity in the books lately, and some brewing badness that is landing even the most experienced Grimm in unfamiliar situations. It has me interested in seeing if the series is gaining more plot-driven elements. I look forward to seeing how it continues from here, and finding out just which crazily beloved legend from our past or our fairy tales will be stirring up trouble next.

Return from Grimm Tidings to One Good Book Home