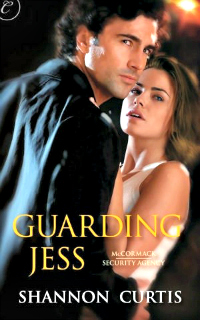 Etiquette coach Jessica Pennington makes a living being and teaching people to be polite and proper in every social situation. It's a surprisingly lucrative career. Perhaps so lucrative that now, just as she has her first book set to hit the shelves, Jessica has been targeted by a stalker whose threats are growing more and more dire.

The combination of his years in the military and his time with the elite McCormack Security Agency has bred a thirst for action and a need to make a difference into security specialist Noah Samuels. Just recently back at work after taking a bullet on his last job, he's going stir crazy as he rehabs his arm and waits for his next assignment. Serving as bodyguard for Miss Priss isn't even close to what he had in mind. Who in the hell would want a manners coach dead, anyway?

No sooner is he introduced to the pretty and uptight Jessica than Noah is snatching a suspicious box out of her hands and racing an explosive device away from the potential victims in her office. While he may have no idea why or who...yet, there is no longer any doubt that someone's obsession with the pretty but contained manners coach is deadly serious.

The longer he guards her and works on figuring out who is stalking her, the more Jess starts to get to him. Instead of an uptight, prissy, and demanding task master, he sees sides to Jess that are doing surprising things to areas of Noah's chest he thought long dead. Soon he's thinking that the job he originally pegged as babysitting until his arm is well enough to handle an important assignment may just be the most important assignment he'll ever have.

Guarding Jess was an entertaining, sexy, suspenseful surprise. I wasn't crazy about Curtis' series debut Viper's Kiss, which I felt crossed the line of believability and tread dangerously close to ridiculous in places. This second book managed to keep the quirk factor that appealed in the first book, had great characters with strong chemistry and a plot that delivered an ever-intensifying level of danger and suspense, but stayed within the bounds of plausible.

Noah and Jess were a fun couple. Noah had tall, gorgeous, and broody down pat. Perhaps he was relatively stereotypical for the genre (how many ex-Special Forces security agents does that make in the genre, now, a bazillion?), but he had a few personal issues and emotional baggage that set up some internal conflicts for the character that fit well with the storyline. Jess had layers and depth that pushed her character beyond Miss Priss into a caring, down-to-earth woman with a heck of a shy side. I loved her backstory and the details that fleshed her out into a likable, intelligent woman with flaws and insecurities.

Individually they were each strong enough for their roles as romantic leads. Together their relationship had some adorable and fun moments, plenty of sizzling-hot sexy moments, and a good number of solid story-progression moments to round it all out. The romance plot threads were woven together nicely with the suspense and their relationship evolved in a fairly realistic time frame, which was a bit of a surprise given the length of the book.

I really loved the suspense plotline, too. Curtis kicks it off strong, then builds it throughout the narrative, slowly and steadily increasing the threat level and danger until it reaches an intense climax. It lacked a little of the complexity of some of my favorites in the genre, and I had the Bad Guy pegged from the moment the character was introduced, but other story elements were a surprise and overall the storyline avoided much of the sort of cliché that drives me a little batty. It was a strong and solid, if straightforward, suspense.

This was slightly more than a four star read for me. I would have liked just a bit more originality in Noah's character, more involvement with secondary and ancillary characters, and a few more layers in the plot. Given the page count, though, and what was included in the story, this was a very satisfying read. One that was far above that of its predecessor in many ways, not the least of which was my ability to maintain a willing suspension of disbelief.

Yes, it was a little cheesy in places (nothing I found too egregious), and it had moments that were lighter in tone than others. It was, though, a good suspense and a sexy romance with two characters I enjoyed very much. If this second book is any indication of the direction this series is headed in, I will definitely be along for the ride.

Return from Guarding Jess to One Good Book Home