Andrea Walks on the Wild Side

Andrea Nash has lived through horrors that would have killed lesser women. Her childhood was a nightmare that left her emotionally scarred, living in the human world doing everything she could to distance herself from her shapeshifter lineage. For good reason. She was a Knight of the Order of Merciful Aid, highly decorated and deadly, but the Order doesn't have any room for shifters, let alone beastkin like Andrea.

The Order found out she's a shapeshifter when a recent battle with a big nasty put her in the hospital, thus ending her career, but not before she'd already sacrificed her relationship with Raphael, beloved son of the bouda clan's alpha, and snubbed the whole shapeshifter population of Atlanta.

Hey, when your life explodes around you, it may as well be completely obliterated.

Now Andrea is just trying to get settled into a life without the Order, working with her best friend Kate at their new investigation agency. Not that work has been all that busy lately. But that sort of thing really is a mixed blessing, because when things pick up and Jim, the Pack's chief of security, calls Andrea with a problem, being bored out of her mind starts to sound pretty good in comparison.

Four shifters have been killed and Jim wants Andrea to investigate. And the victims were on a job, working for Raphael's reclamation company when they were killed.

Now Angela has to investigate the deaths of the employees of her ex. Fabulous. Because life wasn't nearly painful, complicated, or uncomfortable enough. At this point the only thing missing is some Big Bad threatening world-ending destruction.

I've been a fan of the Kate Daniels series since its inception, but because I'm weird (or dumb...your pick), I was hesitant to try Andrea's story when it came out. I bought it because I love the world and the characters, but I didn't read it...for exactly the same reason. See, spin-off books in beloved series tend not to go so well for me, and it took me a long, long time to finally work up the nerve to give Andrea's book a chance.

Of course I'm glad I did and of course I'm kicking myself for waiting so long. Of course. It's Ilona Andrews, after all.

I've always liked Andrea's character and appreciated her contributions in Kate's books, and I'm happy to say I think she acquitted herself nicely as a main character in her own. My biggest worry was that she would come off a little like Carbon Copy Kate, but that was certainly not the case. She was the gun-toting, arrow-shooting, bad-ass Andrea I know and like. Maybe a little older, darker, and more serious than the vibe I got from her in Kate's books, but still Andrea.

And man, her backstory definitely gave Kate's childhood a run for the money on level of horror and damage inflicted. Andrea's personality and life choices make so much more sense now. Andrews did a great job bringing that all together and weaving it into a compelling, sympathetic personal history of a character with whom readers were already familiar.

I have to admit, I was expecting more of a paranormal romance feel to the story than I got. Like the Kate Daniels books, this one read more like an urban fantasy with a strong thread of romance secondary to the main plot of the book. It's a more robustly traditional romance thread than that of the Kate and Curran saga, and I think it worked as it was supposed to, but it wasn't the focus of the narrative.

Andrea's investigation into the murders and the subsequent revelations about the crime, the concerned parties, and the potential for badness was a meaty, solid story that kept me engaged throughout. I don't know that it was as intrinsically intense as any of the books in Kate's series, and it lacked a bit of the personal connection that's so prevalent between Kate and her investigations/catastrophes du jour, but it was well-developed, layered, and provided a broad array of danger and life-threatening situations for Andrea and her friends.

I loved spending more time with Roman, who was introduced in Magic Slays, the book preceding this one. I'm still not completely sure how such a nice, decent-seeming guy such as Roman can be an evil Volhv and a source of darkness, but hey, the contradictions in his character make him interesting. I just like the guy.

Raphael, on the other hand, was a surprisingly big douche bag throughout a good portion of this book, and was responsible for one of my biggest sources of disappointment in the story. When he had the unmitigated gall to show up in Andrea's office with that human bimbo and was so hideous to Andrea during her interrogation, I wanted to kill him. And I was shocked Andrea didn't ever really nail him on it.

I will say the whole scene served as a nice catalyst to get Andrea to embrace her inner beast and let her fur flag fly, providing the impetuous for some much-appreciated character evolution, but the whole messed up situation was begging for a more visceral confrontation before resolution and there just wasn't anything beyond a tepid (well, seemed tepid to me) apology on Raphael's part. I wasn't nearly satisfied considering the insult he paid Andrea by doing what he did. Not. Enough. Groveling.

The other elements of their relationship evolution provided a nice level of heat and some humor to the read, but didn't quite wow me in the same way that Kate and Curran's evolving relationship has. I liked it well enough, but it never really captivated me. Personally, I was more moved by Andrea's long-awaited decision about joining the bouda clan and the scene in which she took control of her destiny in that regard. I kinda loved that.

In part because the Kate Daniels series has provided such a rich tapestry of world building, story, and character, and in part because the writing duo that is Ilona Andrews is all sorts of awesome, this book really shouldn't be missed if you're a fan of the series. It may not have been quite as fun for me as the Kate and Curran show, but it was was a solidly entertaining, fantastic visit into a world I've come to love and admire and it provided a bit of a different perspective on characters who have been around since the beginning. I liked it a lot.

I agree that Raphael needed to grovel more, but I sort of got his take on it too... he's a spoiled brat and he felt betrayed by her, so he lashed out like a spoiled brat does. Aunt B is fantastic and has a huge blind spot for him, so he expects the same from all the women in his life. Not excusing it, but I can see that his character is shaped by this. Andrea, however, is completely kick ass. Love her and her scenes with Kate are always the best. I really enjoy this series and waiting for the next one is KILLING me. Great review! I'm always happy when someone picks up these books :)

Hey, Mariana! I always love and appreciate your comments. You're spot-on about Raphael being shaped by his past. I agree completely. Didn't make him any less of a douche in that one scene in particular, but I agree completely!! LOL.

I've still got the most recent Kate book to read, so I'm not to the killing me part yet. I'm sure I will be when I take another "me day" and read that one. Somehow it helps just having it in my TBR pile. ;-) 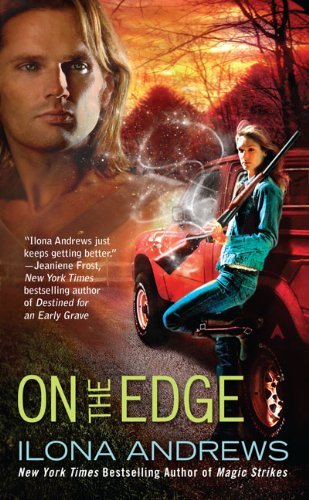 Return from Gunmetal Magic to One Good Book Home