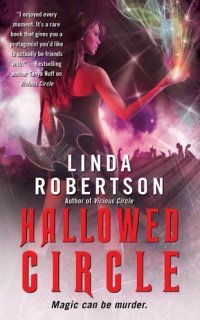 Set just a handful of weeks following the events of Vicious Circle (Persephone Alcmedi, Book 1), the book that introduces the reader to Robertson's world of witches, waeres, vamps, and fairies, Persephone Alcmedi is back to stir up some magic. The justice-loving, solitary witch and earnest granddaughter of Demeter, guardian of Beverley, and witch-of-Johnny's-dreams hasn't yet fully dealt with nor truly understands the ramifications of a vampire stain forced on her by Menessos and a mythical position of power given to her by her goddess, Hecate. She'd better learn to deal quickly, though, as she's been called to enter the Excimium, a witch-lead competition to determine who will be the next High Priestess of the Cleveland Coven...a position formally held by the notorious and now missing Vivian Duncan - missing because Persephone herself turned her over to the vampire Menessos for the crimes of murder and betrayal. But Persephone sure can't explain that...nor can she bow out of the invitation, though she has no desire to be HPS.

Forced to compete...and forced to do her best or lose respect among the elders when her calling as Lustrata is disclosed...Persephone is trapped into service, but the competition teaches her more than she thought it would about her own soul and the lengths she will go to do the right thing for the right reasons. As if her daily trials aren't enough - raising the recently orphaned Beverley, taking care of her aging yet still cantankerous grandmother, yearning for the puppy dog eyes and sexy-as-hell bod of the rocker and waere Johnny, and learning to protect herself and her loved ones from dangers known and unknown - the competition might just end up killing her - and that's if she's lucky. Life as the Lustrata is no one's idea of a picnic but Persephone will do as she's always done - fight the good fight.

Of course, that's also what got her into this mess to begin with...

I liked Vicious Circle quite a bit, but I have to say, I loved Hallowed Circle. With a complex plot that was rich with magic and a much more in-depth, studied exploration of the world in which Persephone inhabits, I was well and truly impressed with the mythos and the attention to minutest detail Robertson created here. There were parts that could've truly dragged for me, because a lot of time is spent on the magic and rituals of witches, and that's not normally something I enjoy reading about, but between the way the book was broken up and Roberston's sublime writing style, it kept my interest high and my fascination fully engaged.

We get a much more comprehensive grasp of Persephone's character, as well, and while I wasn't always fond of her in the first book, I definitely loved the direction her character took here. It's so rewarding seeing a strong leading character with a few quirks, foibles, and flaws truly start to embrace who she is, and Robertson writes that particularly well. It's refreshing to read a character who deals more in black and whites than gray areas, when so very many of the urban fantasies out there nowadays seem to be all about the gray. I found it a nice change that Persephone's life starts to skid out of control whenever she's thrust into an issue she tries to keep to the grays, and only truly triumphs when she deals with the world in very black and white ways.

Ironically, that comment is a complete contradiction to some I've made in other reviews, when I felt a character needed to understand living life in between the black and white to truly gain any level of maturity (and needed maturity to be tolerated), but Persephone is definitely a different breed of heroine...one that necessitates a definitive and clear passion for doing the right things for the right reasons to weigh the just and unjust. While a character that noble could possibly become a little too white-knight-ish to sustain any level of complexity, Persephone's own very human insecurities, doubts, and passions keep her from tripping into holier-than-thou territory.

Also back are Demeter, Persephone's grandmother, and Beverley, her ward, and of course the mysterious waerewolf Johnny, who's got a few secrets of his own left to reveal. Not to be forgotten, of course, the vampire Menessos is still up to his manipulative tricks, though more subtly and with a bit less explanation than in the previous novel. Most of these secondary characters we met in Vicious Circle continue to be fleshed out into very pleasing, three dimensional characters, even though more of the focus of Hallowed Circle is about Persephone's growth and personal challenges than the previous novel. A few of the more ancillary characters don't have such a large roll here, though, and while I missed them, there are others who were introduced that I quite enjoyed spending time with.

I was thrilled to see a much broader tapestry of conflict and danger and characterization included in Hallowed Circle; it was a very well-rounded and thorough novel. I think it is a much stronger installment and a much better read than Vicious Circle, but I would suggest anyone new to the series start there, because while things are explained perfectly well in Hallowed Circle to let new readers know what went before, Vicious Circle is still a good book and the experience of meeting all the characters who play a part in Persephone's life is truly priceless. It helps to appreciate the nuances and subtleties of what goes on in Hallowed Circle.

I'm chomping at the bit to get my hands on Fatal Circle, the next book in the series, due out at the end of June. In it I hope we see more from Menessos and get the same sort of widened view of vampire life like we did to a small degree with the waere's here. I think the triangle of power and dedication and need between Persephone, Johnny, and Menessos has been a fascinating evolution and I can't wait to read more.