I Was Hoping for a Happier Hour 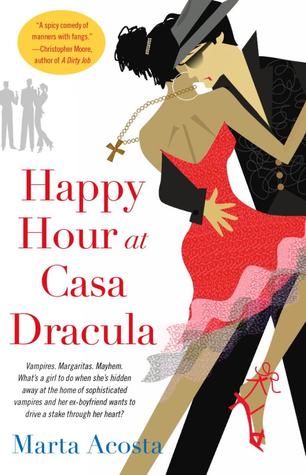 Oh, boy, I have a mix of reactions to this one, so please forgive me if this is a little all over the map...

There are aspects of Happy Hour at Casa Dracula that I enjoyed. The blend of erudite literary references mixed with the lead character Milagros' zany internal monologue was entertaining. The relationship between Mil and Edna was fun. I enjoyed Oswald and his family, and my favorite part of this book was the second half, during Mil's stay with them. I didn't mind the first person narrative - I'm familiar with it, and technically speaking, there were no inconsistencies in the "voice" of the story throughout, so it was at least satisfying on that level.

Unfortunately, there are also several aspects of the book I didn't like at all. I thought the beginning was tedious and during the entire first half of the book, I found Milagros to be vapid and shallow. I had a hard time warming up to her at all, and then when I finally started to, there were a few things that tripped her up again. Overall she was okay, but not someone I could easily relate to or sympathize with.

As for the more technical aspects, I thought the story was original, but not necessarily all that interesting, and the tone sort of slid between tongue-in-cheek humor and an attempt at some mild suspense and action that was tied up too quickly and was regrettably anemic. I would've preferred it not be included at all, actually, or if it had been more focused and fleshed out. My biggest complaint is one I've had in other series, and I'm coming to realize it's an actual reading preference. I don't like books whose main character is either incidental to the action or the action goes on around the main character, as was the case with Milagros and the CACA (and I'm not even going to mention the issue I had with that acronym) goings on. Paradoxically, the fact that Milagros was instrumental in the end of that particular plot point was even more discordant to me and the quick conclusion was unsatisfying and confused as a result. This particular complaint is more personal preference than critique, however, so take it with a grain of salt. All in all, the first half of Happy Hour at Casa Dracula was a two star read and the second a three star. I took the average.