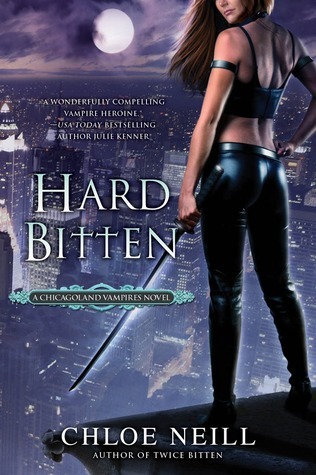 Note:   This review is spoiler-free.

It's been two months since a failed attack on Cadogan House thrust shapeshifters out of the proverbial closet and into public eye. The halcyon days of public awe and superstardom for vampires have since been replaced by a growing restlessness and antipathy, increased violence, and anti-vampire protests. Bigotry and hatred, fear and loathing are all on the rise, threatening the safety of all vampires in the city. It's a social and political nightmare.

When word leaks out that raves have gotten out of control, the mayor of Chicago, in an effort to stay afloat in politics, yanks Ethan and Merit into his office for a bit of old school motivation. Unless Ethan, Master of Cadogan House, and Merit, Cadogan House Sentinel, puts an end to the raves in his city and finds out who's responsible for the alleged slaughter and feeding frenzies being reported, Ethan will be arrested and vampires will start to get ground up in the political machine of species regulation and segregation.

While solving that mystery may be on Mayor Tate's agenda, Merit has broader concerns, because the GP, a group of fusty old vamps who have no clue or apparent concern for the human impact on American Houses, has Cadogan House hands tied in some pretty tight knots. That means she's got to keep Ethan out of the know and solve this mystery without his assistance so the fallout doesn't prompt the GP to take down the House. Even with their romantic conflicts, that thought doesn't sit well with Merit. Not to mention her astounding lack of faith in or respect for the GP, as she's already seen just how impotent and unconcerned they were in their dealings (or lack of) with Celina Desaulniers. When evidence comes to light that points again in Celina's direction, it's up to Merit to find out what that bitch is trying to pull this time...while tiptoeing her way through a growing mass of prejudiced, hate-spewing humans looking for war.

This fourth installment of the Chicagoland Vampires series reminds me of why I became such a fan. Unlike most urban fantasy series, CV isn't about superhero-esque battles of good versus evil, or end of the world threats, or apocalyptic megalomania. At it's core, the series is about a geeky college girl who becomes a vampire and has to learn to adapt to a world of vamp business, vamp politics, vamp alliances, and human/vampire relations. And there's really nothing very supernatural about any of that, as vampires are all just people trying to stay alive, keep each other safe, and live a normal (for them) life. That normalcy...that mundane but easy-to-relate-to backdrop was very appealing to me in a genre heavily populated by weapons, warriors, and wild weirdness.

Merit, as the heroine, is totally lovable...in a frustrating, stubborn, head strong, naive, sometimes bumbling, occasionally (and admittedly) immature sort of way. Actually, all the characters are very well done, and I love many of them, but Merit is really the reason I read the series.

In the four months that have passed since Merit became vampire, her increasing confidence in her job and in herself seems natural, organic to her character, and believable. Neill's strengths seem to lie in character development and it serves readers particularly well when it comes to Merit. Ethan, too, has evolved in this book, and he's no longer the total Darth Sullivan that was so imposing (but hot!) and forbidding (very hot!) in the first book. It was nice to see some of his earnestness and his softer side.

I wasn't pleased, though, with the amount of time allotted to belaboring the relationship between Merit and Ethan. At the end of the last book, there appeared to have been some progress made between them and the book ended, I thought, on a happier, or at least more hopeful note than existed in any place in this book. Merit was, I thought, disproportionately unforgiving to Ethan, and Ethan, despite assuring Merit he was going to be patient at the end of the last book, seemed to push again and again for redemption and another chance. After awhile, that much focus becomes emotionally exhausting and, frankly, it slows down the pacing of the rest of the story threads.

And that's not even mentioning how ticked off it makes the romantic in me. But we're not going there in this review, because if I start, I will not stop. Until maybe November.

There were a few other things that I wasn't thrilled with in this book that I haven't been bothered with previously. Characters I've loved didn't have as significant a roll here. There wasn't enough Mallory, Catcher, or Lindsey, who bring out the adorable snark in Merit, so much of that, too, was diminished. And I'm so sick of Morgan Greer I could spit. If I have to listen to him whine one more time about how Celina was his Master, and that's why he had to do such-and-such or so-and-so which has completely screwed over Merit, et al, I sincerely hope someone stakes him. Slowly.

I remember the days when I felt bad for the guy, because he was really trying with Merit, and though he manipulated the situation, I sorta liked him. I definitely liked him and Merit together - their personalities meshed well. Problem is, Merit has grown up and Morgan - despite his advanced age - hasn't. More troubling, his scenes with Merit are starting to be repetitive because of it.

Also troubling me is Neill's habit of 80-85% of slow, sometimes plodding mystery investigation that doesn't go much of anywhere interspersed with the day-to-day vampire existence and romantic angst, followed by 15-20% of a crime solving, truth revealing, conflict climax and resolution that explodes plot progression and revelation all over you until you're dripping with it. Or, as in the case of Hard Bitten, dripping from it. There just isn't the sort of steady progression of information and slowly revealing plot points that more plot-driven books are known for in the world of the Chicagoland Vampires. Because of that, the mystery of the strangely and suddenly uber-violent raves seemed slow to develop and evolve, and the issue was compounded by a vampire drug plot thread that seemed cliched and unoriginal.

And maybe it's just me, but I reread the first three books in the series over the past few days in preparation for this fourth book, and it seems to me that there's a tendency towards repetitive themes. Celina is always some sort of threat, for example, and Ethan/Merit have been blackmailed into solving a mystery twice in just four books. I didn't notice it when I first read the series, probably because of the length of time between installments, but back-to-back reading doesn't do the series any favors in this regard.

Oh, and for the record, I have some significant problems with the ending of this book beyond the obvious. In fact, and without providing spoilers (which, admittedly, is limiting), I question the plausibility of the timing of the sequence of events given several of the participating characters, have a problem with what seemed like character inconsistency in more than one character, and have no clue why, given what I know of one character in particular, the words, "absolutely not" weren't first out of the gate. Because of those nagging issues and legitimate questions, as vague as they all are, the ending wasn't as successful (relatively speaking) as it might have been.

On a brighter note, there are definitely some significant changes in the air for the series, and as a reader, I truly appreciated getting some long-time questions answered - however reprehensible those answers were - and seeing some very satisfactory resolutions to long term problems. In that way, Hard Bitten is the single most pivotal book in the series and it offered up virtually limitless opportunity for new and exciting series developments or direction. It's going to be a long wait until November, for sure, but when it comes, I'll be there ready and waiting for my next Chicagoland Vampires fix.

Another Note: For those who have written reviews or posted public comments that have contained major spoilers about the events in this book, please consider removing them or editing them for content (by including spoiler alerts or segregating spoilers with preceding warnings). The purpose of a review is to actually review the work, not rejoice/commiserate with the masses on content details. There are other forums for that. Find them. Use them. Don't ruin the story for those who try to be conscientious about not being spoiled. It's rude.