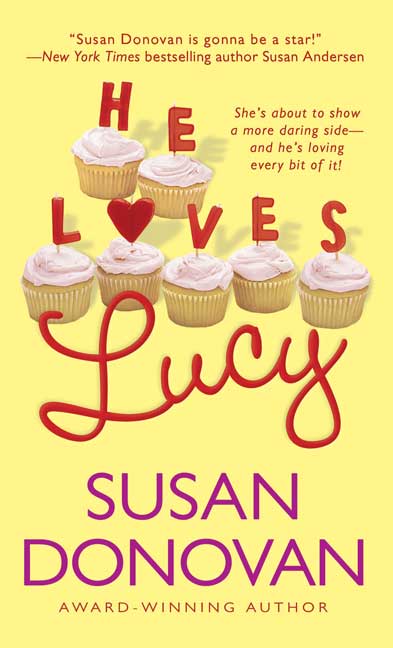 The challenge may be a marketing scheme intended to promote The Palm Club, a Miami fitness club that marketing executive Lucy Cunningham landed for her firm, but the benefits could be life changing. If she allows herself to be turned into the next local television reality star and willingly puts herself through a year of dieting and training while under public scrutiny, both she and the fitness club's best trainer will be awarded $1,000 for every pound she loses, and with a goal of 100 pounds of total weight loss, the dollar signs and the potential for starting her own marketing firm were too much for Lucy to pass up.

Though the thought of losing the Milk Duds definitely made her waffle a little.

Trainer Theo Redmond knew he had his work cut out for him when the pretty but overweight Lucy showed up at the club for their first meeting and promptly nearly asphyxiated on a piece of candy, but he needed the money to get back into medical school and finally fulfill his life-long dream. Between the fitness club hours, the bouncer side job he does on the weekends, coaching for the Special Olympics, and taking care of his brother Buddy, he doesn't have much in the way of a social life, and won't for the foreseeable future, but making time to train Lucy, help her get into shape, is just the sort of task that makes him feel good about what he does. And Theo is very good at what he does.

They start out as strangers. It starts out as a job, and a quest, and a challenge. But twelve months of grueling work, fastidious dieting, and daily workouts draws Lucy and Theo closer and closer. Despite first impressions, Theo's not the gorgeous but shallow womanizer Lucy thought, but a generous, dedicated, kind and intelligent man (and yeah...gorgeous). Regardless of her starting weight, Lucy is wickedly funny, open to every torture...er...task he sets her on, highly intelligent, and adorable.

She lusted him at first sight. He liked her from the beginning. And now, well... Who doesn't love Lucy?

I sure did. In fact, I loved just about everything about both Lucy and Theo, but Lucy was definitely my favorite of the two. Her acerbic wit, her humor - often self-effacing, and her insecurities were all thoroughly developed and displayed in a very realistic (yet still funny) way that made her intensely sympathetic as a character and more than a little lovable as a person. Theo was a doll, and a truly great guy, but he also had his emotional baggage and past traumas, insecurities, and fears, and that balanced him out nicely and kept him well away from the too-good-too-be-true ledge.

Their story, from beginning to end, was so entertaining, and I truly appreciate a romance that develops over a realistic amount of time and for the right reasons, as opposed to the many lust-driven relationships with a week or less from first sight to wedding bells that I've read in many romance novels lately. Don't get me wrong, there's tons of lust between Lucy and Theo, but their romance was driven just as much by their genuine caring and respect for each other, their compatibility and their emotions, as well as their hormones. I loved that.

And I was very impressed by the aspects of the plot that dealt with Lucy's weight loss, including those daily food journal entries. Donovan dealt with this exceptionally sensitive subject with tons of humor, grace, and keen insights into the minds of the dieting, while managing to promote the necessity of a healthy self image and the importance of the intrinsic combination of both physical and mental health. This isn't a book about a woman losing weight to get a guy. It's really about getting healthy because healthy is better, and while the initial motivation is the challenge and the money, and there's certainly a guy involved, I never got the sense that Lucy was losing weight so Theo would love her - and that's really what set this book apart from just a fun comedy romance.

It was really fun, though.

The main characters were great, the secondary and ancillary characters seemed genuine and were well rounded, adding a nice feeling of fullness to the lives of Lucy and Theo as they interacted with them. There were plenty of subplots that added depth and dimension to the arc of the book, and most of those subplots were fleshed out nicely, or touched upon just enough not to overwhelm the main plot while adding flavor and texture to it.

I could have done without the odd subplot about Lucy's boss, though. I didn't like that at all. It was, for me, the one weak spot of the book, because it was cursorily developed, didn't make a whole lot of sense, and was a little all over the map, and when Lola was tossed into the mix, and I thought something significant would finally develop, it fizzled and went nowhere. It was the only part of the book that didn't seem to fit and is really my only issue with the whole story.

Well that and I don't know of a single post-9/11 airport in this country that lets anyone beyond the security checkpoint without a boarding pass, and I doubt Miami is the exception, but that's just me being really nitpicky.

I loved everything else about this book, even the parts that I knew at some point would be coming given the nature of the plot. Funny, a heck of a lot of fun, sweet and loving, smart, sexy, and poignant, He Loves Lucy hit just about every single one of my happy spots. I enjoyed it immensely.

Now...where did I put my Milk Duds?

Return from He Loves Lucy to Contemporary Romance Genre

Return from He Loves Lucy to OGBDA Book Reviews Home