Heart of the Dragon's Realm 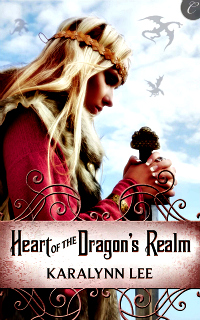 Princess Kimri of Anagard is furious with her brother the king. He has traded her hand to the King of Helsmont for an alliance and weapons. A worthy enough cause, given the toll the ongoing war with Kenasgate has taken on her land and people, but that doesn't excuse him bartering her like a piece of property.

Especially not to the enigmatic king rumored to have a dragon guarding his mysterious kingdom.

Arriving in Helsmont to meet her betrothed brings all manner of surprises to Kimri. The king is neither old nor unpleasant as she'd feared. In fact, he's quite arresting in stature and gracious in nature, and instead of a quick wedding, he is abiding by mountain custom and allowing her a year to make sure they suit before committing to the marriage.

As Kimri settles herself into an unfamiliar kingdom and acquaints herself with her betrothed and his people, finding acceptance and freedoms she hadn't even enjoyed in her own land, Kimri can't help but start to think that when it comes to betrothals to a handsome and kind mountain-king, perhaps a year is too long.

This was a lovely little tale, and despite having some issues with several elements of the storyline, I enjoyed it. The characters were likable and the writing was well-crafted and wonderfully descriptive. There was a fantastic amount of world building, especially throughout the first half of the book, and Kimri's character, as well as a couple of secondary characters, were memorable.

It's good that I enjoyed Kimri's character as much as I did, though, as she was the sole main character, and that's where my problems with the book started. At best, Tathan was an ancillary character in the story, sharing only a handful of scenes with Kimri. They spend a bit more time together off page, as Kimri refers to sharing their morning meals and accompanying him around Helsmont, but it still wasn't close to enough for me to be able to consider him a romantic lead character.

Kimri spends far more page time with Prince Herrol of Kenasgate, and while those scenes were nice enough to build towards the plot elements late in the book, it hampered my appreciation for the romance between Kimri and Tathan. That romance was understated nearly to the point of nonexistence and I felt Tathan, who I liked very much from what little I saw of him, was painfully underutilized. It was truly a shame, as this could easily have been a story I absolutely loved had he and their romance had more presence in the tale.

I did love the big reveal during the book's climax, even though I saw it coming, but that's about all I loved in the final quarter of the book. The storyline, which had been evolving at a relatively slow but pleasant, steady pace once Kimri arrived in Helsmont, started to come apart a bit for me as layers of external conflict were added into the plotline. The pace definitely picked up, and that would have been fine, but I thought the various plot points and elements of conflict got glossed over and rushed through as the story reached its climax.

Still, there were very many good points in this read, and I enjoyed Lee's authorial voice. Had the story evolved just a little differently towards the end, and had Tathan had a much larger role, this could easily have been a five star read for me. It fell short in that regard, but I would still love to revisit this world if given the opportunity. Several characters, Commandant Beatris in particular, left a lasting impression. I was saddened by how her role in the story ended and would love to know what becomes of her.

Return from Heart of the Dragon's Realm to Fantasy Romance