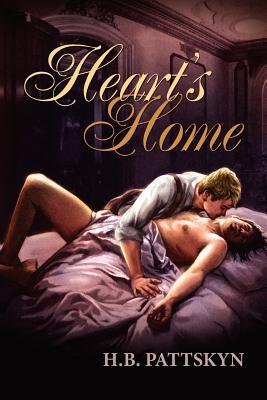 A year earlier it had become notorious, London's East End district of Whitechapel forever linked with the hunting grounds of a vicious serial killer known only as Jack the Ripper. For the poor and wretchedly unfortunate, the criminals, prostitutes, gangs...and dispossessed lycanthrope Alun Blayney...it was home.

Flush with winnings from a recent card game, Alun is on his way to a doss house to rent a room when the unmistakable scent of blood, death, and werewolf washes over him. Following his nose, he finds the body of an eviscerated young woman, slain by one of his kind. Not by fang or claw, however, but by blade.

Police Constable James Heron is walking the beat on his shift in Whitechapel. As he turns a corner late that night, he's rocked by the scene before him. A tall, rangy man is leaning over a body on the ground. Before he can blow his whistle to call for assistance, the man has him pressed against the brick wall, swearing he wasn't a killer. That if he had been, James would be as dead as the woman whose blood was even now spreading across the cobblestones.

While that logic is just enough to relax James a little, it's the look in the eyes of the dark, brooding man that stirs something in James, despite the vicious circumstances.

Two men from vastly different worlds, one human, one lycan, both outcast. Together they discover a tentative, fragile happiness. It's a feeling Alun can't trust to last, not with the secrets he holds, or the situation in Whitechapel. There are no happy endings for the werewolf who has sexual congress with men, and no possibility of a human mate, even if James could accept his existence. And as the body count in the East End continues to rise, the grim, unalterable fact is that happiness is a luxury when survival alone is in doubt.

What a fantastic read this was! The depth and scope of the plot impressed, and Pattskyn imbued the tale with a dark, rich sense of decaying desperation that perfectly accentuated the world and its inhabitants, setting the tone of the story and providing the framework for the often deeply conflicted emotional landscape of the characters. And speaking of the characters...wow.

Alun and James just absolutely slayed me. Their story sucked me up, slammed me down in their world, and dragged me along for the whole ride. I adored them. I loved them even when I wanted to grab Alun by his shaggy hair, shake him senseless, and kick him in the kneecap for his stubborn, jaded cynicism, feelings of inferiority, and doubt in the face of James' absolute commitment to him. Oh, sure, I totally understood where those feelings came from, they were absolutely organic to his personal history and his circumstances. I still wanted to kick him.

James was both Alun's diametric opposite and his absolute match in every way. His ability to love, his temperament, the determination in him to live with love in his life despite huge social and legal opposition, his commitment to Alun, even his concern for Rob, all made him yang to Alun's yin. I both respected him as a man and loved his character.

Both characters were so well drawn, so perfectly conceived and executed, that they lived and breathed on the pages - to the point that they made me hyperventilate. I did not want their story to end. I was completely caught up in the traumatic angst of their relationship, the suspense of the crimes that impacted them both, and the frustration with Alun's relentless negativity. Though he'd call it realism.

And they weren't the only characters of note in this book. Pattskyn was brilliant in the judicious creation of unforgettable secondary and ancillary characters. I absolutely fell in love with Robin and would love to see him in his own book, and though she was only featured briefly towards the end, Gwenyth was a fantastic character. A slightly darker and more ancillary character that intrigued me was James' boss, Inspector Lamont.

None of these characters would have had as much going on for them if the storyline hadn't been so great. Pattskyn could give lessons on creating a multi-layered, complex tale with a wealth of internal and external conflicts to drive the plot-driven story elements even as they were adding gravitas to the character-driven elements. Between the mystery surrounding the murders, the perplexing connection between the crimes and the local pack, the fact that werewolves exist and Alun is one, James and Alun's sexuality, the class difference, and a sundry of other tribulations and trials they must weather, there was just so much damn story in this book that it could have easily been twice as long.

I do wish Alun had been a little less persistent in mentioning again and again that James was human and therefore couldn't be Alun's mate. That got repetitious and became a little one-note as a conflict, especially when there was so much else inherently working against them.

I also felt there were some emotional elements that were glossed over towards the conclusion of the book, the paradigm shift that Alun has about his relationship with James addressed almost subtly. The doubt was such a big part of Alun's makeup for so long that the moment he started to have faith would have been more satisfying had it been better defined. There was a brief acknowledgement, but I felt it lacked the emotional impact necessary to balance out the negativity and doubt that drove Alun for most of the book.

Still, my sincerest appreciation goes to Pattskyn for this debut. It was a fabulously written, complex, and gritty tale. The historical elements seemed authentic, the paranormal elements were original and fresh in their setting, and both the romance and characters were divine. I hope she doesn't make readers wait too long for the sequel in the works. I'm dying to revisit these beloved characters and their dark, gritty world.

Thank you so much. I really appreciate the time you took to read my book and the truly thoughtful feedback. (And of course I'm glad you liked it!)

Thank YOU, Helen. I loved this book and finding out you have a sequel planned made my entire week last week. I adored Alun, James, and Robin and truly think they're three of the most memorable characters I've read recently. Awesome book. Thank you ever so much for writing it!

This is just plain good writing. Proves that quality knows no genre.
J.Z.

Return from Heart's Home to LGBT-M/M

Return from Heart's Home to One Good Book Home