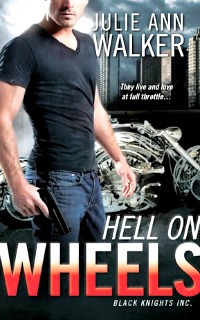 It's been three months since Nate "Ghost" Weller had the torturous task of informing his best friend's family that their son and brother was dead. Three months since Grigg's little sister Ali Morgan climbed into his Jeep and fell apart in his arms. Three months of hellish nights remembering the kiss of solace and life-affirming passion.

And he spent every moment of those three months being racked by guilt over the twelve-year infatuation he'd had for the woman. Guilt and self-disgust are tearing him up, but it's the soul-sucking knowledge that's killing him. Nate knows that if sweet, sunny, kindergarten teacher Ali ever finds out what he'd done in that Syrian hellhole where he and Grigg had suffered unimaginable torture, she would never, ever forgive him.

And now Ali has traveled halfway across the country and shown up on his front doorstep in Chicago. Well...less a doorstep and more an armed guardhouse in front of the custom motorcycle shop that serves as the front for the Black Knights, a group of black ops specialists who take the most difficult of the sensitive jobs for the country. Still, Ali's here for a reason, one that has obviously freaked her out and scared her, as she's asking for his help.

Someone has been following her, she was almost mugged, and her home has been invaded, and that's all happened since he saw her last. It's obvious that someone thinks she has something of value, but she has no idea what or who is responsible. Racing to her brother's best friend, knowing full well he's more than what her brother told her he is, seemed the best idea at the time.

No sooner does Nate let her into the Black Knight, Inc. building than it becomes painfully clear that Ali is going to need the Knights' brand of highly specialized help. She's positively neck deep in trouble. Nate just hopes he can keep his hands off the woman long enough to pull her out of it.

This series debut by Walker wasn't what I was expecting. It had a lighter tone, with lots of intended humor and cute situational comedy moments, a female lead character right out of a Disney movie (including an annoying aversion to any sort of adult language), and a Bad Guy so exaggerated he came off as more a caricature than a character. The whole thing just sort of struck me like a cross between an episode of The A-Team (80's TV show version) and a Katherine Heigl movie.

I had some serious issues with Ali's character throughout the book, and I thought the scene featuring the resolution of the external conflict was odd and lacked plausibility. Too, the timeline of some of the major plot points of the story arc were suspect and strained my willing suspension of disbelief. That being said, it was the almost bi-polar tone of the piece that caused me the most consternation. After all, I have a lot of fond memories of The A-Team (which I watched religiously back in the day), and I think Killers was funny. Silly and ridiculous, but funny.

This book seemed to be trying to stick to the same chord, but when paired with story elements and a scene or two that were utterly grim, brutal, and horrifying to gut-wrenching degree, it just couldn't pull it off. The mix didn't work for me. I couldn't quite find that reading groove I need to settle into the story.

There are great moments in this book, though. I loved the secondary characters, especially Ozzie, and I adored Peanut. The ancillary storyline between Frank and Becky was great for amusement...until it, too, took the exit into bi-polarsville. But up to that point it was a lot of fun. The narrative is heavily flavored with pop culture references and the internal monologues and descriptive passages are all about the colloquial language.

That last was both a plus and a minus, though. It was amusing in places, but I prefer that in smaller doses than I got here, and because it was universal throughout the story, I had difficulty differentiating character voices when the point of view of the narrative shifted focus between characters.

And about those characters... I liked Nate a lot. I did. He had moments when he was maybe a little too in touch with his emotions for my taste, as I like my broody, tortured souls to be not quite so hearts-and-flowers expressive, but I'm a total sucker for unrequited love theme. And despite the two-faced tone of the tale, what he went through in Syria was utterly horrific. I felt for him.

Ali, on the other hand, made me want to shake her. She's sharply intelligent, keenly observant, and can handle a handgun for personal safety...which is great. But she doesn't curse (one more h-e-double-hockey-sticks and I was going to be the one to hurl), she's morbidly embarrassed by the idea of her panties being searched, and she's a delicate little girly-girl flower who responds to stress by either crying about it or vomiting over it.

I had trouble relating to her.

The good points of the story were very good. There's a lot of promise in the style and substance of Walker's writing. I especially enjoy the concept of the custom motorcycle business front for the spec-ops Black Knights, because lets face it, the only thing hotter than the bodacious bods of fight-ready former military men is the thought of those bodacious bods, shirtless and slick with sweat, on a thousand or so pounds of roaring bad boy chopper.

In war, there are no unwounded soldiers. ~ Jose Narosky

Whoever came up with that ridiculous term? Underwear that fantastic deserved to be mentioned on a regular basis. 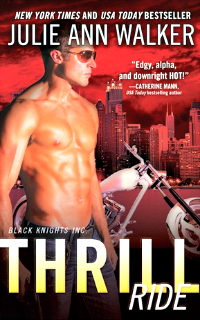 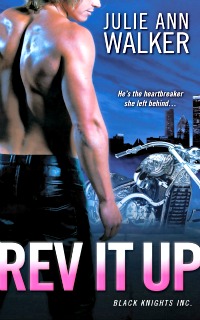 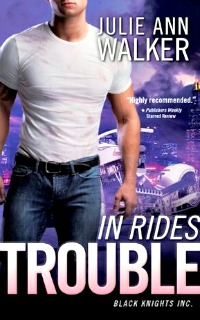 Return from Hell on Wheels to Romantic Suspense

Return from Hell on Wheels to One Good Book Home