Could Have Stayed Hidden 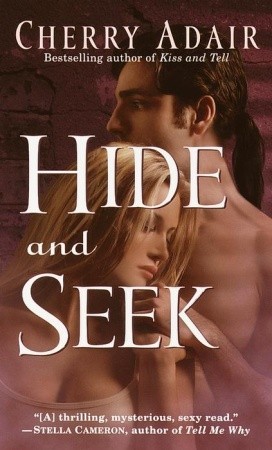 A kindergarten teacher and the glue that holds her family together, Delanie Eastman has hared off to the South American compound of the drug making, gun running, sadistic sociopath Montero after her baby sister went missing while in his company. Now she's neck deep in nasties and way out of her element, no clue how to even find her sister and naively...stupidly...sure she can handle the monster responsible for her disappearance.

T-FLAC agent Dr. Kyle Wright has been working undercover with Montero for four years, and just as he's ready to spring the trap and bring in the massive multinational task force that will finally end him, he arrives at his compound and practically trips over the one woman who, four years ago, picked him up in a bar in San Francisco and etched herself indelibly on his mind and heart...then left him after giving him her virginity.

As if four years of work that scarred his soul and sole responsibility for the operation that includes a world of different anti-terrorist groups isn't enough, now he's got the uncontrollable, intractable, and unbelievably stubborn Delanie to save, too. And she's just as determined to not be saved as he is to make sure she gets out alive.

While I thoroughly enjoyed Kiss and Tell, the first of the full length T-FLAC novels featuring the Wrights (my review here), I had an intensely difficult time getting through this one.

It's written with Cherry Adair's typical aplomb, three dimensional and layered, with a steady narrative full of pleasant description and dialogue that seems organic to the characters and has a natural conversational flow. The action scenes are taut, gripping, and very clearly defined, and the sex scenes between Kyle and Delanie were smokin' hot. The bad guys are definitely bad and their crimes atrocious, and the coldly clinical way they engage in those crimes is horrifying. I totally sympathized with Kyle and supported his actions to put an end to them.

And despite all of that, this book fell apart for me on two very basic points: the concept of the plot and the character of the female lead.

I was, in the end, incapable of garnering, let alone maintaining, a willing suspension of disbelief in a book that suggests it's conceivable that a character such as Delanie Eastman, kindergarten teacher and just this side of naive virgin, would think for even the briefest nanosecond that going up against a man such as Montero on her own, with no back up, with no one knowing where she is, in a colossally idiotic attempt to free a sister it is illogical to assume is even alive, was feasible. Let alone actually do it.

The entire premise for Delanie's presence at Montero's compound was ludicrous. And her actions while there, including her reactions to Kyle, were absurd and foolhardy beyond the extreme. Not to mention she was stubborn, stupid, and obscenely obtuse at every turn and with every layered plot thread. There was absolutely nothing to redeem her to me as a character.

I'll be the first one to admit, Adair writes the hell out of this book. Her skill as an author is impressive and I respect her work. But the concept for Hide and Seek was just too grievously flawed and one of the two main characters completely irredeemable. No amount of excellent authorial skill could have saved this one for me.

Return from Hide and Seek to Romantic Suspense Genre

Return from Hide and Seek to OGBDA Book Reviews Home