Has Some Good Points 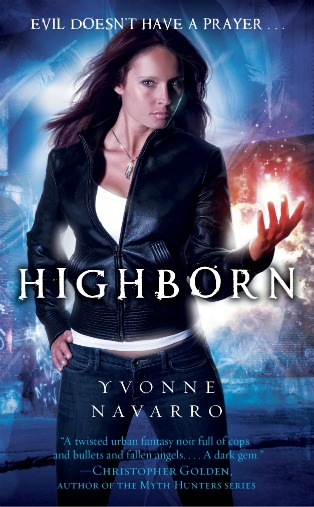 Her name is Astarte, and after eons of torturing souls and bathing in their blood, she started wondering, hoping, for the possibility of redemption. She is a fallen angel. A demon. Once Lucifer's lover and partner. And she's weary of the screams of the damned and the unrelenting misery of hellfire.

Now on Earth in Chicago, taking the name Brynna Malak, she hides from Hunters who would drag her back to Hell if they find her. Escaping one puts Brynna in position to witness a murder and get caught up in the homicide investigation of Chicago police detective Eran Redmond. The man is desperate to catch a killer who has gunned down five seemingly random victims and Brynna is his only lead. He realizes almost immediately that not everything is as it seems with the odd woman, but he has no idea - no frame of understanding - for the truth of who and what she really is.

The longer Brynna stays in Chicago, the more she starts to feel things far beyond that which was familiar to her from her demon milieu, and as those feelings grow, as her experiences with humanity widen her narrow world, one thing becomes brutally, painfully clear. The road to redemption is long, twisted, and often paved in horror.

This urban fantasy series debut has some good things going for it. Navarro has a smooth writing style, and the narrative flows nicely from plot point to plot point. I enjoyed the concept of the story and the developed mythos. The best, though, and my favorite part of the book, is Brynna.

I loved her moral ambiguity and lack of empathy. It was a brilliant way to simply and easily define and delineate her character, identifying her inhumanity and developing her redemption through the burgeoning awareness of her own emotions... which so often befuddle her. It made so much sense for an eons-old demon fresh out of Hell to have no ability to relate or feel sympathy for humanity. In fact, I wish Navarro had used even more restraint, evolving her character even more slowly than she did, because I found coldly logical Brynna a delightfully unique heroine.

Eran wasn't a bad secondary character and romantic interest. I liked him well enough. Next to Brynna, though, he sort of faded into the background, and there wasn't much development to add depth to him. Lesser secondary and ancillary characters were few and lacked any real definition, and I was a little disappointed that some who were introduced early, like Eran's partner Sathi, disappeared entirely as the book progressed.

The story gave me a few problems. The plot was okay, but it wasn't the most complex I've ever read. It was mostly a pretty linear tale about a fallen angel starting a journey towards redemption and getting caught up in a murder investigation that tread over into her territory. Be that as it may, I liked it as I was reading it. Enough to rate it four stars, anyway. The lack of complexity in the plot and secondary characters, as well as a sex scene that was horrendously glossed over prevented more than that, but it was a solid four star read...until the end.

I didn't like the end at all. Actually, I didn't like a plot development that came a few chapters before the end, too, but to a lesser degree. The end, though, the last chapter and epilogue, bothered me quite a bit. I thought the resolution was completely disappointing from a story standpoint and I was left feeling that a whole lotta energy got expended throughout the book for negligible gain. Even more troubling were the handful of scenes that crossed a very important line for me between mythos and religion.

Of course this is strictly my personal preference, but I dislike when religion creeps into my fiction, especially in urban fantasy, which is amazing for the very fact that so much of it has its roots in imagination centered around a core of wildly diverse cultural mythos. Having a main character explaining God's plan as she pontificates about destiny and a soul being in God's hands, then following it up with the most trite and pedestrian catch phrase ever, "Everything happens for a reason," however, was a total turn off (not to mention a crystal clear reflection of everything that bothers me about religion in general). I'm sure I'm in the minority with that opinion, and that's fine. For me, though, I start getting antsy when I feel like I'm being hit over the head with the Christianity-based faith stick and have no tolerance for it in urban fantasy books. It dropped the book down to three stars for me.

I'm interested enough in Brynna's journey towards redemption and her forays into empathy and all things of the human condition to try the second book in the series with the hopes that the bouncing ball drops back into the mythos area of the court and leaves religion alone. I hope that's the case, because I do think Navarro is a skilled author who can spin a story worth reading. And I did really like Brynna.