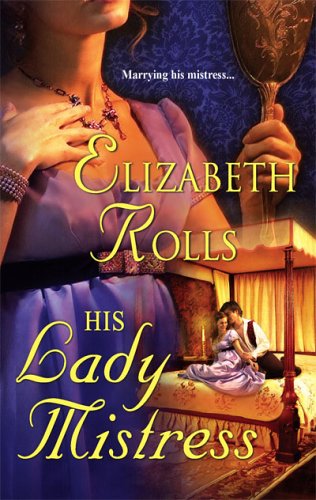 Admittedly, I'm no longer a fan of historical romance, but as a free read on Kindle, I thought I'd give it a try. While there was the familiar formula that populates too many historical romances (girl meets boy, girl loves boy, boy acts like an ass because he doesn't realize he loves girl, girl gives up, boy realizes he loves girl and becomes man enough to win her back), this book takes miscommunication and needless internal strife to a whole new level. And that's why I gave up on historical romance, because far, far too often the crux of the conflict in the book could be solved in about five minutes if the lead characters would just open their mouths with some honesty about thoughts and feelings. I realize that that's not how it was 'done' in the past, but does that have to be the sole conflict in so very many books? Was there nothing but miscommunication and society backbiting in the 1800's? Thank HELL I didn't live then. I would've been a hoyden, I'm sure.

Anyway, while I thought that Max in particular was a wretched male protagonist until the very end - god, the things he said and did to Verity were absolutely horrifying at times, and utterly unforgivable, and I thought Verity could've had a bit more backbone after having to be so strong in her Aunt and Uncle's house, I can't say I disliked this book. It really wasn't until the last ten percent of the book - when one or two MORE misunderstandings and miscommunications piled up and finally broke this reader's back - that I really ran out of patience with it. I was so frustrated by that point that the HEA seemed far too little way, way too late for me to be satisfied.

Parts were there that COULD have provided interesting alternate conflict - Verity's father issues, Max's sense of duty and misplaced sense of obligation, dealing with the ton, dealing with Verity's "family"...lots of avenues could have been explored for external conflict that wasn't. That's a shame, because Max came off as a small-minded, short-tempered, and rather stupid abusive jackass until his redemption at the end. And Verity - that poor child that has had nothing go right for her in five years - just seemed like a victim.

While I didn't dislike the book, nothing in it particularly endeared me to either the author or the genre. The potential was there, but too many communication misses and opportunities wasted leave that potential unrealized.

Return from His Lady Mistress to Historical Romance Genres

Return from His Lady Mistress to OGBDA Book Review Home