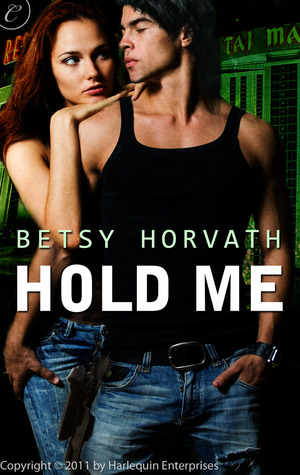 With a cover that is obviously and spectacularly blown, FBI agent Luc Vasco is forced to run for his life from the mob family he'd been investigating. And that strategic...if slightly panicked...retreat isn't going so well. Luc's already had to ditch the sweet Vette he was driving, then crashing, and he's hobbled by the ankle he wrenched when he jumped out a window. He just doesn't have all that many options left. Well...less than not all that many. One. He has exactly one option.

The Chevy Nova loudly sputtering at the nearest stoplight.

Katie McCabe's life isn't going so hot right now. It hasn't for several months, actually. Not since she caught her fiancé doing push ups on his desk in his office...with his hot supervisor spotting him from her position underneath him. She may have swept the cheating bastard out of her life...um...literally...but she lost her job at the company over the incident. Apparently taking a broom to his bare ass is considered more indiscreet than his infidelity. Who knew?

She's waiting at a stoplight, her beloved but ancient Nova giving her a bit of trouble, when the door to the passenger side is jerked open and a strange man dumps himself into the seat beside her. It isn't until the bullets start flying, though, and the man starts shouting at her to drive, that Katie realizes that she had been wrong about one very important detail. Her life hadn't, in fact, hit rock bottom. It couldn't have, as it's obviously still in a rapid free fall - with gunfire, car chases, and strange men claiming to be federal agents tossed in for that extra bit of terminal velocity!

Not that she's freaking out or anything!!

Then she finds out that not only is the man chasing them the son of a notorious mob boss, he is a known psychopath, and in saving Luc's life and embarrassing the psycho in front of the cops by just defending herself, she's put herself squarely on his Needs To Be Brutally Killed list and is no longer safe to live her crappy little life. Nope, now she has to live a crappy, life-threateningly dangerous life.

Because that is so much better!

She just can't handle one more thing going wrong right now. Not one.

Pity, then, that Luc has a few secrets he's refrained from telling her, even as he sets out to keep her safe, because when she finds out who he really is and how they're connected, he's fairly certain the tempestuous woman is going to try to finish the job the mob started.

I have to admit, when I picked up this book, my expectations weren't high. I had a fairly open mind about it, but the mention of the mob in the book summary didn't thrill me. I'm not a fan of mob-related fiction. I am, though, quite happy to say that I hadn't even finished the prologue before it was clear that this book was not going to be like anything else I've read recently. Three chapters later and I realized that I had become quickly and thoroughly enchanted.

Yeah, yeah, mob related...peripherally, anyway. Didn't give me a problem. And sure, technically its a book that has a suspenseful plotline. Right. Didn't pay much attention to that, though, either. At least not at first. I was too busy being totally enamored by Katie and Luc as characters and falling in love with their quirky charms and the mix of sobriety and humor that is their wacky, rocky relationship.

First, the man has a castle that intimidates him a little. Come on, that's priceless! And Katie is a total firecracker. She's quick-witted, sharp-tongued, and feisty as hell...though I wouldn't ask her for directions to the corner store if I were you. She tends to blow up emotionally, then calms down and logics things out in a way that I found very appealing...and, okay, more than a little familiar. And the picture Luc carries in his pocket - and the meaning behind it - gave me all sorts of happy sighs of sappy romantic contentment.

I loved them together. Their characters and the arc of their relationship throughout the book is what made it shine so spectacularly. But even without them there were a lot of good things. Katie's mother was an interesting secondary character, and Némes stole every scene he was in. David was wonderful and there is lots of untold story around Melanie, too, and the list goes on.

There is actually quite a lot ground covered in the book, and not all of it was comedic. Some of it was realistically sober and sad, some dark and disturbing, and even some sickly upsetting. To be honest, the whole psycho mob son plot thread never really came together for me. The suspense was a nice enough backdrop, sure, and it provided some thrills and chills, but it was a bit inconsistent and didn't blend all that well with other aspects of the book. It also gave some room for Katie to tread over the line into some thoughtlessly dangerous actions that I would consider stupid in any other book. In this case the stupidity was slightly alleviated by the lighter tone of the surrounding narrative. It was more like a dramedy in places than serious suspense that inspires a true sense of danger.

It was entertaining, though. Very entertaining. I was caught totally by surprise by this one, and happily so. Now I'm left with a desperate hope that this book segues into a series featuring some of the secondary characters we met here. Némes and Melanie both would be perfect as main characters in their own books (either individually or together). There was tons of stuff throughout the book practically begging for further development, and I refuse to believe that there will be no better resolution to the issue with Katie's parents. I want more of all of it. Please?

Return to top of Hold Me