Home Away From Home For the Holidays 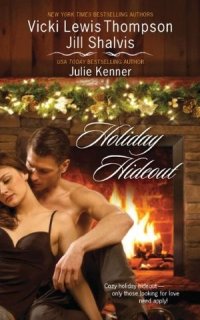 Disclosure:   An ARC of this Harlequin Anthology was provided to me by Harlequin via NetGalley.

In a cozy cottage overlooking Lake Tahoe, married sociology professors from University of Nevada rekindled the romance in their rocky marriage. It was such a tremendous experience for them that they bought the cottage and rented it out when they weren't using it. After several letters left by thankful renters, the professors noticed a trend.

The trend was so fascinatingly obvious the professors couldn't help but test out the wild theory that there was something truly magical about their cabin. So they decided to study the phenomena. And with three holidays fast approaching, there was no time like the present to see if three separate couples could find their forever love in a small cottage by a large lake.

Beth Tierney has decided she's had enough of her family's matchmaking attempts. Taking control of her life, she's eschewing the family gathering for Thanksgiving and spending time alone at the Lake Tahoe cabin owned by her favorite professor from college. She is a self-sufficient woman who neither needs nor wants a man to fulfill her life and her holiday is going to be all about embracing her single status and focusing on her career.

Handyman Mac McFarland is dreading the trip to his parents house for the holiday. His mother has invited yet another young woman to parade in front of him in the hopes he will finally get married. He's so focused on the impending disaster that he doesn't question the oddness of the phone call he gets from his friend Jillian Vickers. She and her husband are professors at the state university but own a cabin on the lake, and she asks him to go over to the cabin and check on a pipe leak she's worried about.

Mac shows up at the cabin and meets the gorgeous Beth and suddenly all their best intentions are tossed out the window as sparks fly. The heat between them is instant and intense. Two people least interested in being a couple could take coupling to a level that will give them both an entirely new home for the holidays.

Architect Jason Monroe doesn't know the meaning of Christmas spirit. He's too busy keeping the family home out of the hands of the bank, running herd on his younger brother, and competing fiercely with brilliant architect Zoe Anders. The beautiful, brilliant Zoe who makes his pulse race as often as she annoys him.

When the senior architect at the firm challenges all the associates to come up with a dazzling design to land a whale of a client and offers a choice promotion as the prize, everyone in the room knows that Jason and Zoe are the two he's really speaking to. They are the best at the firm. Now they'll be pitted against each other far more directly than they ever have before.

As Christmas approaches, neither Jason nor Zoe are having much luck with their designs. Little did either of them know that a few helpful elves...Jason's brother being top mischief-maker...have conspired to push them together over the holiday break. Two brilliant architects stuck in one snow-bound cabin on Lake Tahoe for Christmas. By the end of their stay they'll either have killed each other, or realized that a little bit of collaboration...in all things...is even better than a visit from Ol' St. Nick.

Five years ago their dreams and ambition sent college sweethearts Cleo Daire and Josh Goodson in two different directions, ending a relationship that had meant everything to both of them. But they made a deal. They would meet up five years from that dark day to catch up and see if there is still something between them.

Josh loved Cleo but his duty was to his family. Cleo hated seeing Josh subjugate his dreams but wouldn't try to stop him from following his heart, even as hers was broken.

Now it's five years later and Cleo's career is hitting a great stride. Josh's life is over a thousand miles away. She didn't even know if he would remember their promise. He had. It was almost all he thought about lately. Still, regardless of their chemistry or the feelings still swirling between them, the fact remains that she lives on one coast and he on another. And he's still falling in line with the bonds of obligation to his family business.

Still, could the magic of one special cabin strike gold once again? Is five years long enough for them to get another chance, or are they both too caught up in the lives they are living in the present to worry about what could have been in the past?

I don't read many anthologies. Too often I find the stories uneven and the overall expense not worth the hit-or-miss reading from story to story. Still, I was feeling festive this holiday season and decided to devote some reading time to four of the holiday anthologies that were available. So begins a short jaunt down a frosty lane bedecked with holly and fragrant boughs of pine, twinkling lights, hot chocolate, hot sex, and, of course, love.

The premise for this contemporary romance holiday anthology, the cabin-of-love in Tahoe, connects each of these three seasonal novellas and gives them a sense of cohesion that goes beyond the holiday theme. Authored by three widely popular writers, each story is well written. All three are creative craftsmen when it comes to building their plots and getting their characters together in the limited and limiting space allotted to them in their individual novellas.

For me, though, neither the sense of cohesion nor the quality writing was enough to fully entertain me over the span of the three stories. Jill Shalvis' novella, The Christmas Setup, was my personal favorite, though as she's one of my favorite authors for light romance, that's wasn't a huge surprise. Her novella was a little sweet, a little spicy, and had some humor that made me smile. The first and third books in the anthology didn't have the same amount of appeal, but not because they're poorly written - they're not. The problem I had with each was the literary tropes they featured.

The anthology spans three holidays and the novellas span three separate tropes. Thompson's The Thanksgiving Fix is a lust(love)-at-first-sight story that has the main characters having sex within hours of meeting each other and working out the logistics of happily ever after two days later. That's one of my least favorite tropes in romance fiction because it's so rarely written in a way that I can believe. Maybe I'm a cynic...no, I know I'm a cynic...but I have no faith in the permanence of the relationships in these cases. And color me prudish, but shagging someone you've just met is neither romantic to me nor particularly festive...it does, however, put the 'ho in the Ho-ho-ho.

Shalvis tackles the enemies-to-lovers trope in The Christmas Setup, and that was another element in its favor, because it's one of my favorites in the genre, right behind the friends-to-lovers trope. I wasn't totally thrilled with the conclusion to the story; I wish the job had gone the other way and I would've liked a more detailed picture of the resolution of Jason's financial issues, but I enjoyed this novella quite a lot.

The New Year's Deal features the second-chance romance. Kenner's novella was probably the most expansively developed plot, and I don't have a problem with second-chance romance per se, but I never warmed up to Cleo in this story. She seemed fairly selfish and unbending in the initial breakup between her and Josh and she never really improved for me as the story went along. Plus, second-chance romances don't work so well for me when I actually read the first chance going splat. I find it depressing, and depressing in a holiday novella doesn't exactly keep my chestnuts roasting on an open fire.

Unfortunately, this holiday anthology sort of exemplifies why I don't read many of them. Three great authors whose books I've read and enjoyed, three novellas surrounding three separate holidays, and three popular tropes for the genre, yet I couldn't quite engage with all three stories. Still, there's that whole festive thing, and I've got three more anthologies to go on my journey to a very Merry Christmas.

Return from Holiday Hideout to One Good Book Home