Keep Your Eye On That Frost Guy...He Nips 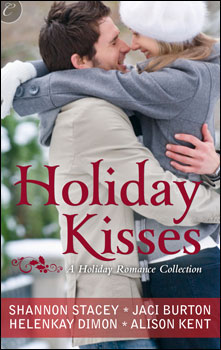 Disclosure: An ARC of this book was provided to me by Carina Press via NetGalley.
This rating, review, and all included thoughts and comments are my own.

Four holiday romance novellas make up this seasonal delight, and they did a nice job of keeping me toasty on a couple of cold winter nights. Metaphorically, anyway, as southern Florida isn't exactly known for its brisk evening temperatures, even in winter.

This anthology didn't have the shared concept that united the three novellas in the previous anthology I read, but I'm perfectly happy without that. This one was a more consistent and entertaining read, each novella offering something for readers. And especially nice, Carina Press offers each of these four titles individually, for those who prefer to pick and choose. I appreciate that, even though in this case, the set together didn't have any that disappointed. For me, this anthology as a whole rated a little higher than four stars.

This Time Next Year 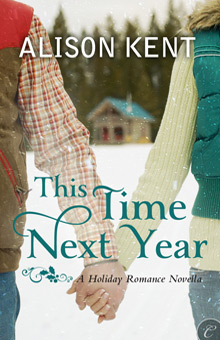 Brenna Keating curses the misinforming weatherman as the flakes begin to fall in earnest on her slow climb up the mountain to her grandmother's house. Her life is at a crossroads and the thought that this may be the last holiday she spends with her beloved grandmother makes this holiday both intensely bittersweet and vitally important. Her entire focus is on enjoying every single holiday tradition before she goes overseas for a year. She should have spared some focus for the deer that's standing in the middle of the winding, snow-covered road.

Rescuing a woman Dr. Dillon Craig knew could only be Brenna Keating from her wrecked car in the middle of a worsening winter storm was just the first good deed the reclusive doctor would be doing this holiday season. Once they're safely back to his mountain home, he's forced to acknowledge how appealing the young woman is. Not that he has any intention of acting on the attraction. He's got far too many of the sorts of wounds that scar the soul, for one. And he knows she's up here to see her grandmother before leaving the country. Messing with the woman in any way, shape, or form would be courting disaster.

With Christmas just days away and the attraction between them heating up the cabin more effectively than a roaring fire, the love that builds between them may be just the Christmas miracle they both need...and deserve.

I enjoyed this holiday novella. It was beautifully written, and in places emotionally powerful beyond my expectations. The messages of love, healing, and finding your heart's home aren't limited to holiday stories, but they certainly did fit well.

Brenna and Dillon got involved a little quickly for my taste, and I would have preferred the ending be written out a little differently, but this was a lovely novella with two great characters who had genuine chemistry and a relationship with enough depth to appeal. I enjoyed it quite a lot. 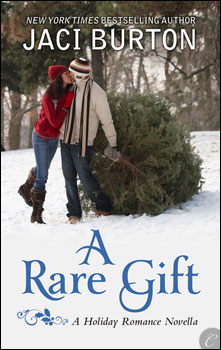 Wyatt Kent has nothing but bad memories and regret from the marriage that ended three years ago. Now he's got to face a construction job contracted by his ex-wife's sister. He'd rather be nailed to the frame of the room addition for day care owner Calliope Andrews than deal with the sheer physical lust the feisty woman inspires in him. And when did the little girl he knew become such a pushy, gorgeous, sexy creature intent on driving him out of his mind...or his pants?

Callie has loved Wyatt since she was a socially awkward college kid, and even she had known that he and her sister were a bad match long before they even tied the knot. It's been three years since the breakup, though, and Wyatt has become a grouchy, grim, stick-in-the-mud. She is just who he needs to give him the love he deserves. And with winter wrapping tight around them, she has every intention of doing just that...just as soon as she convinces him she is nothing like her sister.

While Burton writes a perfectly cohesive, well-developed novella with believable characters and lots of sizzle, I can't say I was thrilled by every aspect of this one. I have to give credit to Burton, I enjoyed Wyatt and Callie together by the end, and that was pretty impressive considering how much I disliked the premise of Wyatt being previously married to Callie's sister. Which was a lot. I really don't like inter-familial relationships.

I also could have done without the "knocking up" conversation and I would have happily exchanged a sex scene for a more complex and significant confrontation between Wyatt and Cassandra. After three years of the sort of negative emotions that were generated by that divorce, the resolution seemed a little too easy and superficial, even for a novella. Still, the story definitely had it's good points, and I really enjoyed Callie's feisty spirit. This one may not have been my favorite in the bunch, but it was better than okay, even with my issues.

It's Not Christmas Without You 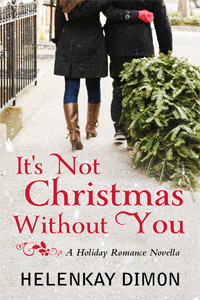 Missing and loving on-again, off-again boyfriend Austin Thomas was never the issue for Carrie Anders. That's why she took her dream job at the museum in D.C. and that's why she made the painful decision not to return to her hometown in West Virginia for the holidays. Even her determination to live her life to the fullest couldn't withstand her heart's desire for Austin when she is with him. He just can't seem to understand how desperate she is to not live a life of regret. To not turn out like her mother.

Austin has always known that he and Carrie were meant for each other. They have the sort of love that lasts a lifetime. All he has to do is remind her of that, which is why he is dragging his brother and a bunch of Christmas trees into D.C., camping out in the vacant lot across from Carrie's apartment, and staying until he can convince her to come home with him. Because one thing he knows, Carrie isn't like his own mother, who walked away from her family without a backward glance and put a career first. She couldn't be. And this Christmas he'll finally convince her of that.

HelenKay Dimon is a new author for me, and that brings up one of the best things about anthologies...exposure to authors you may not have read before. I loved her breezy, humor-rich writing style and the clever way it lightened the tone of some fairly serious relationship issues. Austin was a wickedly charming guy who was utterly clueless about Carrie's needs, but he sure did try hard. Carrie was equally lovable - if a bit too self-absorbed to the detriment of Austin's issues. I can't say much for their ability to communicate effectively, though.

Dimon managed to tell a lot of story in the space allowed. I especially enjoyed Austin's brother as a secondary character, and the backstory of Austin's issue with alcohol added some nice depth to his character and the overall romance arc. The entire novella had a very complete-story feel to it that is often lacking in stories of this length. I wasn't totally thrilled with the logistics that Austin and Carrie worked out at the end, though. It was a little too nebulous for my HEA-loving heart.

Overall this was a wonderful, fun, and funny novella with charming characters. It touched on enough serious issues to have weight and offered enough holiday-flavored romance to warm up the most Scrooged heart. It's definitely put me on the lookout for more stories by Dimon. 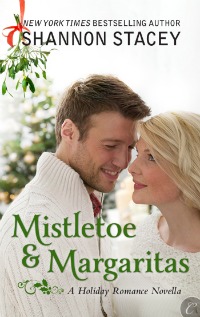 When Claire Rutledge's husband died two years ago, the grief and guilt would have crippled her if it hadn't been for her husband's best friend, Justin McCormick...now her best friend. In the two years since, they have relied on each other, spent time together, worked together, crashed at each other's homes, doing everything two best friends do. Until Justin shows up in the last place Claire was expecting him...her dreams. The sort of dreams that she hasn't had since her husband died. Hot, sensual dreams that leave her wanting.

He can't do it anymore. Can't be with Claire, see her look at him as a trusted friend when he aches for her so badly, yearns for her so damn much. It's Justin's private shame, his deepest secret. He is in love with his best friend and has been from the moment he saw her...even before she'd gotten married and slipped beyond his reach forever. He is going to have to give her up, because the one thing he can't do is dishonor the memory of the man who trusted him to watch out for her.

If he can get through the holidays, he'll do the right thing and walk away. His resolution gets tested, though, the night of the Christmas party. The night his best friend and the woman he's loved for years looks at him across a crowded room with a glint in her eye that he recognizes for the frequency he's felt it within himself. It's desire. For him. Maybe this holiday will see all his Christmas wishes granted, after all. Maybe.

Neither the shorter length nor the less complex plot prevented this novella from being my favorite in the bunch. Not only is the friends-to-lovers theme my favorite of the romance tropes, but Stacey imbued this story with some very painful but emotionally honest moments that resonated with a level of realism I appreciated. Both Claire and Justin struck me as earnest and believable, and while their short journey didn't have room for much depth in plot, it packed a punch and carried me right along with the story.

This one made me feel good as I rooted for Claire to embrace her new leash on romantic life, as I watched Justin come to terms with the understanding that being with Claire doesn't make his guilt go away. Though, to be fair, I wanted to bop him on the head a bit for that. Still, I loved when Justin admitted the full scope of his feelings for Claire and let her know just how long he'd loved her. I melted a little at that. I even enjoyed the method Stacey used to get the two crazy kids together for their HEA. Just about everything in this short, sweet novella appealed.

Return from Holiday Kisses to One Good Book Home