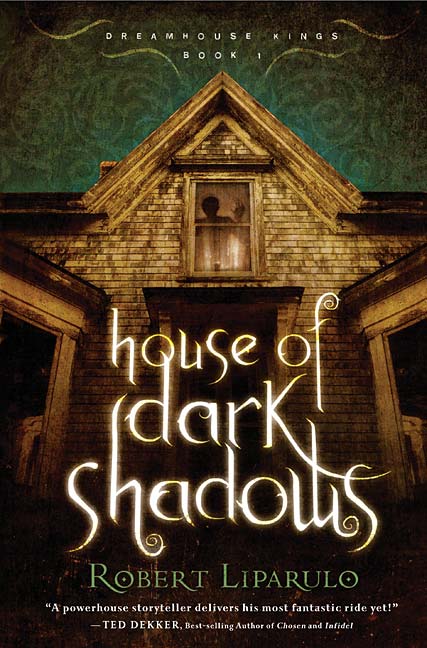 Fifteen-year-old Xander King wasn't at all happy to move from his home and friends in L.A. to a nowhere town in northern California. He felt like he was being exiled and made his displeasure well known to his parents. It didn't alter the fact that he found himself, along with his twelve-year-old brother David and nine-year-old sister Toria, shuffled off to Pinedale looking at houses with their parents. Until one morning, when one of the houses seemed to look back.

Xander felt the wrongness of the house...where sounds come from odd places and his family isn't always where they are supposed to be, but before he can formulate an objection, his father has purchased the house and they are moving in. Not even the history of the house, where thirty years previous a mother was ripped away from her family and the remaining family disappeared without a trace, dissuaded the Kings from the relocation.

As Xander and his brother explore the house and mysterious occurrences keep piling up, the house takes on a darker aspect and the danger increases, but ultimately it is a family secret that puts every one of the Kings at serious risk.

Creepy and atmospheric, Robert Liparulo kicks off this young adult horror/adventure series with gusto, blending a smooth narrative with a gift for story that is often genuinely disturbing and - admittedly - scary. Xander is a sympathetic young hero and his relationship with his brother David is one of the high points of the book. They are realistic in their curiosity and often casual disregard for danger, and the adolescent honesty of emotional expression was also very well represented.

Unfortunately, there were a few things that seriously impacted my enjoyment of the book. The Dreamhouse Kings Series seems to be, and this is strictly based on the first book, less episodic and more series-centric. In other words, House of Dark Shadows isn't a self-contained book with its own completed plot arc. Rather it seems to be the first chapter of the arc of the entire series, and as such it introduces you to the characters and conflict, but doesn't resolve anything. In fact, events just preceding the end lean me towards considering it a cliffhanger ending. It's not badly done, and the book ends at a point that felt natural instead of abrupt, but I loathe cliffhangers and I don't like many series-centric series. It's a style that just doesn't appeal to me (with one or two notable exceptions).

The other thing that bothered me is more plot-related than style-related. While I do believe the story to be scary and the characters likable, their actions left a lot to be desired. I expect a bit of dunderhead behavior from kids, but even with that, there were several times when the actions of Xander and David were on par with those of B-grade horror movie victims for their apparent lack self preservation. And I felt the entire premise and every action of their father's was unconscionable, unthinkable, and lacking in common sense. Towards the end I just wanted to smack him. Hard. Repeatedly.

I also felt that there weren't many surprises in the plot (the "big reveal" was neither big nor revealing when it happened), the pacing dragged a bit at the beginning and again in the middle, and there was an unexplained disparity between Xander's original reaction to the house and his latter curiosity for it. The lack of resolution, the cliffhanger, and the questionable character actions, though, were what really put me off.

I think that the series will have a wonderful following and even with the issues I had, I'll admit...it's the first book I've read in a very, very long time that creeped me out that much. The opening prologue was gut wrenching and powerful and there were others that were hair raising. That being said, and strictly because my preferences lie elsewhere, I just don't think that this series is for me.

Return to Top of House of Dark Shadows