How a Cowboy Stole Her Heart 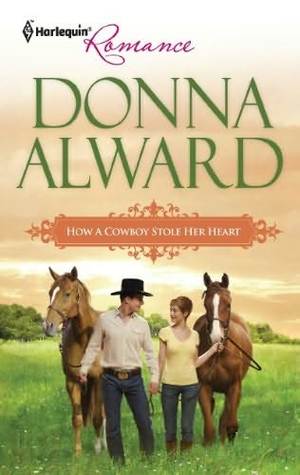 A year of Megan Briggs' life has passed, a year away from her family and friends, living in Calgary to be close to the doctors as she fought the cancer that took her breast and damaged her self image. She went through the treatments, the pain, the sickness, and the loss on her own. And it left more than physical scars.

Now Megan has returned, ready to pick up her responsibilities and help her family as they struggle with the ranch in a bad economy. She has a plan, and dreams. What she doesn't have is a way to convince her family she is healthy and well enough to do her part. And that is starting to get on nerves frayed by returning to a small hometown feeling less a woman than she was when she left.

Clay Gregory knew Megan was back but the echoes of the horrible things he said to his best friend's little sister before she took off for treatment still haunt him. It had been fear, he knew, that had goaded him into taunting her decision to leave home, fear of losing one of the most important people in his life like he lost his father. But she beat the cancer...for now...and she's back. He knows he owes her an apology. He doesn't know how he can afford trusting that she won't get sick again. And he has no idea what to say to her when he sees her again, shoveling out a stall on a brisk morning.

Megan thought she was over her childhood crush, thought that a year away from Clay would've tamed the need for him she'd had as a child, or that surviving cancer would have built up her resistance. But one stilted conversation later and she realized that some things were immutable. Her body isn't one of them. It no longer matters that he will always have her heart, she would never force her damaged body on him, even if she didn't know full well that her cancer would always be a sore subject between them. Some things just aren't meant to be.

But when an opportunity arises to show Clay that she is no longer the little kid he calls Squirt, Megan pushes aside her worry about her scarred and ravaged body and the concern over what Clay is able to handle and seizes it with both hands. It's a decision that will change everything for them both - forever.

This slightly too-sweet romance offers one of my favorite themes in the genre, the friends-to-lovers theme, but in this case that wasn't the big draw for me. Instead, I found myself enjoying the depth and layers of conflict that Megan's cancer cause in the evolution of the relationship between her and Clay. It posed psychological and traumatic physical ramifications of the disease and treatment that was realistic, and as October is Breast Cancer Awareness Month, timely.

I wish those aspects had been even further developed, though. Megan was very young to be struck by the disease and I wish some mention had been made that addressed that or that her age had been a point of contention given all she lost. In fact, I don't recall if her age was even broached or if it was, how old Megan is or was when she was diagnosed. The book starts with her back from the treatment, so much is assumed about her remission and the future outlook, but never clearly stated.

Still, I credit Alward with the realism and genuine concern that Megan reflected as a woman who required a full mastectomy of one breast. Clay's issues as someone who lost a family member to cancer also felt genuine and added a sense of tragic realism to his backstory and character development that appealed.

The issues that I did have with the book didn't have anything to do with the disease or its aftereffects. It was the romance storyline and the character development beyond that which is touched by cancer that gave me some doubts. What had begun as a pleasant, if not largely complicated romance, got a bit turned about and fell victim to cliché. I've read so very many Cinderella-story romances in which the hero gets a look at the tomboy all gussied up like the sexy woman she is and realizes she's his destiny that scenes like that have started to leave me cold. It wasn't a bad scene as far as it goes, I'm just no longer a fan of them in general. That's personal reading preference, though, not a condemnation of the author's choice to include it as the fulcrum of relationship evolution.

What turned me off more than that, really, was a sequence of events later in the book in which Clay acted horribly, knew and admitted he was at fault to his aunt, said he was going to apologize, yet waited days for Megan to come to him before even attempting to do so. On the heels of that is an instance in which Megan calls quits to what's going on between them, then blames him for accepting her at her word. I loathe that sort of hypocrisy in life and in fiction.

My issues with the book being what they are, most of the things that bothered me are strictly subjective. Overall I came away thinking it was a sweet romance that touched on some serious and relevant issues. It didn't do enough to wow me, had a few too many preference-based issues for me to truly like it, but too few to actually dislike it. It was okay, and it had more meat on it's story bones than I was expecting. I particularly appreciate the issue of breast cancer and how it was addressed.

Return to top of How a Cowboy Stole Her Heart