How to Drive a Dragon Crazy

It Wasn't Just the Dragon 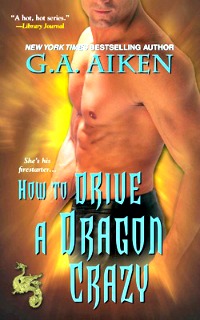 A lot can change in ten years. Éibhear the Blue is now Éibhear the Contemptible, Squad Leader for the loathed and feared Mì-runach, a band of warriors roughly akin to a Black Ops unit for Queen Rhiannon. For ten years the Mì-runach have battled the Ice Land dragons, but now that the force invading the Northland has been smacked down and rubbed out, Éibhear's got a bit of vacation time in front of him.

And a commander who insists he be a good son and visit his family.

Stopping off to see his sister Keita is a bit of a mixed bag, but it does present Éibhear with a unique opportunity. Keita's mate Ragnar lets slip...accidentally, of course...that Iseabail the Dangerous, also known as, well, so many other titles it's almost ridiculous, but most importantly the source of all Éibhear's past idiocy, is needed back home. Ragnar and Keita were planning to pick her up and accompany her there.

Well that just wouldn't do for Éibhear. Not when he's perfectly capable of seeing Izzy home. He's got a few things to say to the woman, things he's left far too long unsaid. Like a sincere apology for their regrettable past. So he'll go. And apologize. Sincerely. To the one woman in all the known universes least likely to accept an apology without making him pay very dearly first. Possibly in blood and body parts.

Good thing he's spent ten years as a mighty and feared Mì-runach or that might actually send the monstrously large Éibhear into a panic.

I have to admit, I'm loathe to write this review. I had quite a few problems with this book, but this is one of my all time favorite series and Aiken (aka Shelly Laurenston) is one of my favorite authors. I usually love and adore everything she's ever written. I didn't adore this.

There were parts I enjoyed. Elements of the book I loved just as much as every other book in this series. Unfortunately, they weren't in the majority. And I had some big issues that I don't want to belabor...mostly because it's just too damn painful to do so...but I do want to mention.

Too much of the first half of the book, especially the events prior to Izzy and Éibhear returning to Garbhán Isle, seemed almost like meandering filler and failed to hold my interest. It dragged down the pace of the story for me and overwhelmed any potential for insight into Izzy's or Éibhear's matured characters. I enjoyed Éibhear's Mì-runach squad, and I didn't mind getting a glimpse of where everyone is ten years after we last saw them, but it plodded on too long before the plot started to feel like it had a definitive direction. And there was far too little that featured progress in the relationship between the alleged main characters.

I say alleged because though this book is touted as Éibhear's and Izzy's show, it felt like they were only in about half of it. Considering there were several significant plot threads that soaked up a large amount of page time and a couple of them didn't even include Éibhear or Izzy, I suppose I should be glad they were in that much of it.

There were plenty of other characters in it, though. So very many, in fact, that it seemed like everyone ever mentioned in the previous books (with the exception of Ren), as well as several new characters introduced here, were included in what was one of the most populous casts of secondary and ancillary characters I've ever seen in a book. Football stadiums don't hold as many people as were in this book.

For all of those characters, and for all of the many, many things going on in this book, some of which were truly wonderful and some simply overkill, the one thing that wasn't included was anything resembling a romance. Given Izzy's and Éibhear's rocky and painful past, then suffering through all the waiting and dealing with all the buildup, that one point of contention was especially hard for me to forgive.

That's what drove me absolutely crazy about this book. That's what pushed me over the edge. Nothing - not one single issue from their past was hashed out or resolved in any satisfying manner, even the ones I felt truly deserved to be addressed. At best, a couple of things became punchlines, when they were brought up at all.

Éibhear apologizes to Izzy early in the book, an apology for which Izzy does most of the talking. They get groiny about halfway through as if it's some sort of cosmic inevitability (in an odd scene that didn't feel all that natural to the storyline in either setting or character to me). Then they get together late in the book. It was, without a doubt, the most underwhelming long-awaited relationship pairing I've read in a book in recent...and not so recent memory.

If I hadn't been so hopeful, or so intent on reading how they finally clear the slate on their past while they acknowledge long-held feelings, maybe my overall impression of the book would have been more positive. I did think there were several interesting developments in the second half of the book. For a transitional novel, which this book clearly is, there is a huge amount of depth in the multi-leveled storyline in that latter half.

I wish I could have appreciated it more.

I wish the first half had been severely edited, the second half expanded, and more room made for Éibhear and Izzy to have a relationship that evolves throughout the book. That didn't happen for me this time. From all appearances, however, there are big things brewing for the characters I've grown to love in this series. There is certainly no shortage of story potential. I just hope that in the future more of the plot is focused on the main characters and their romance.

"You are a callous cow, Branwen the Awful. A cruel, callous cow...and I adore you like the suns."

Branwen shrugged, black eyes twinkling, "And I you, cousin, for together we are a true blood-filled nightmare - which I find nothing but entertaining!"

"I'm still not talking to you."

"Still? When did you start? The not talking, I mean, because usually I can't get you to shut up."

"I thought I told you to wait."

Izzy gave a light, carefree laugh. "I simply adore how you think I'd take your orders at any time or for any reason in this known universe. That just amuses me so much. Such a sense of humor you've gotten."

Return from How to Drive a Dragon Crazy to Genres