How to Worship a Goddess

Worshiping Safely Would be Nice 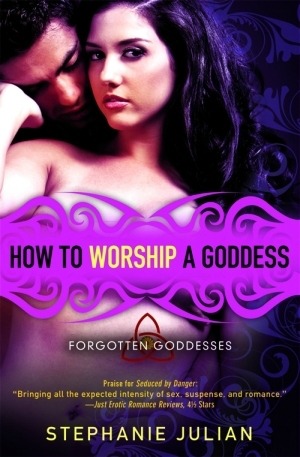 Disclosure: An ARC of this book was provided to me by Sourcebooks Casablanca publisher Sourcebooks via NetGalley. This rating, review, and all included thoughts and comments are my own.

She was once revered by thousands, worshiped and beloved as Lusna, Etruscan Goddess of the Moon. Powerful, respected, feared, her influence spread wide over the land.. Where the silvery light of the moon brushed coolly against the earth, she reigned.

But that was a few thousand years ago.

Now known as Lucy Aster, the goddess owns and runs her own bar. Her powers have waned as the number of her followers diminished, and her purview is limited to those few lucani, Etruscan wolf shifters, who still attend her. She serves as their protector and draws power from their belief. Yeah, she's come down in the world a little. On the bright side, she's got killer seats and season tickets for the nearby minor league hockey team. She's a huge fan.

She also has a major lust-on for Brandon Stevenson, Reading Raiders Number 17. For the two years he's been with the team, she's been hot for the man. Probably knows his stats better than he does, too. Watching the man play is one of the few things that spices up what has become a mostly obsolete existence.

Brandon doesn't know her name, but for two years he's admired her from afar...from the ice where he plays three nights a week during the season. As time goes on, though, the need to meet her grows, and he finally pulls some strings to track her down through her season tickets and property records. When he works up the nerve to approach her, he drives out to her bar, a little blown away by the intensity of his reaction to her and the effect she has on him when they're together.

And when Brandon finds out who Lucy really is, what Lucy really is, and learns that she's next on some demon's hit list, he'll be drawn into a world he hadn't known existed...and will have to decide if worshiping a goddess is worth the risk not only to his life, but to his heart.

Instead of the well-rounded, fully fleshed out, and comprehensive plot that balanced romance and an external conflict or two, one that excited me with the potential of a unique combination of paranormal/sports romance, this story offered lots and lots...and lots of sex interspersed with scenes that seemed heavy on the info dumps and light on action. It doesn't matter how hot, raunchy (I mean that in a good way), and intense the sex is, or how interesting the information is, I was disappointed in the story. Had I been expecting erotica, I would've been able to enjoy the good points of this story, like the sheer originality and depth of mythos and world-building, instead of growing increasingly frustrated when the focus of the book stayed on the sex.

The strongest story elements, while doled out to the reader in various dialogues between the scenes of hot, raw sex, were so detailed and creative that I kept expecting it to lead to more plot-driven action and a wider scope of story. Then there was another sex scene and my hopes were dashed. It's not that I don't like erotic fiction. I like it when I'm in the mood for it, and I prefer to be prepared for it. When I'm not, it's a little bit like being flashed in a city park - surprising and more than a little uncomfortable.

His hockey career fit his character perfectly, and Julian wove together his traits and skills with a deft hand and an eye towards a few twists that were deliciously intriguing. He hit all the right notes as a clueless human while his world view was being dramatically expanded, and he did a great job as the exceedingly protective and possessive alpha male who was, despite it all, a little out of his depth.

I was less enamored with Lucy, who I felt was a major Debbie Downer. She seemed to spend way too much time mourning her obsolescence, whining about what she should do versus what she was going to do, and griping to herself about how things have changed and how hopeless it all is. When she wasn't screaming in orgasm, she tended to be overly pessimistic and played the role of victim with far too much believability and frequency.

Except for one thing...

Two characters, one an immortal goddess who has used multi-partner sex rituals to amp up her power, the other a professional hockey player, with personal histories that absolutely guarantee they've been taken for more rides than ten stables of Kentucky Derby winners. And yet within hours of meeting each other...and every time after that, they're pounding out the rain dance with nary a raincoat in sight, nor one single discussion of what can or cannot be transmitted or conceived when the rain starts to fall. Not only do I find that the complete opposite of sexy, I think it's irresponsible. And disrespectful. On both their parts. Condoms are sexy. Safe sex is sexy. Respecting your partner enough to at least broach the subject is sexy. And it's the responsible message to send, too. Without it, the sex can be written as hot as the surface of the sun - and still completely turn me off.

Return from How to Worship a Goddess to Paranormal Romance