Hunted By The Others 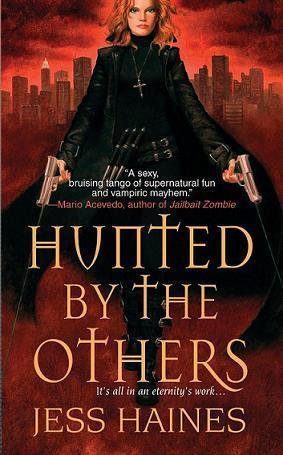 Private Investigator Shiarra Waynest prefers to stay far away from the supernatural race of Others who made themselves known ten years ago, after 9/11 and the collapse of the Twin Towers. Frankly, they scare her. She even dumped her boyfriend when he revealed, in nearly as surprising and traumatic a way possible, that he was a werewolf (though that had less to do with him turning furry and more to do with him lying to her for months...so she says). Still, fear doesn't pay bills and it doesn't keep her intrepid business afloat, so when a mage from The Circle contacts her and offers her a lucrative amount of money to find an artifact for them, Shia takes the job. Even knowing that she's got to ingratiate herself with vampire mega-mogul Alec D. Royce. Even with the understanding that being in the same room with a vampire, let alone one as powerful and ancient as Royce, makes her shake with sheer, unadulterated terror.

The meeting doesn't go well. It doesn't look like Shiarra's life...which seems to be getting shorter by the moment...is going any better when the mage who hired her is brutally killed by what appears to be a combination of werewolf and vampire butchery, the vampire she's reluctantly dealing with has manipulated her into a contract she couldn't escape from, and members of an extremely militant anti-Other hate group, the self-named White Hats, are breaking into her home and threatening her.

A book is like a fine piece of art (I know, not nearly as familiar as the Gump adage, but stick with me). Scenery rendered with careful strokes to create the background, a bit of shading and color to set the tone, characters added in repose, caught in a blink, imbued with vitality through a flick of red on a lip here, a hit of blush on a cheek there, shadows in the eye still there. Brush stroke, patience, canvas, light and darkness, life and its mimicry, merging together to create, in its completion, a masterpiece of talent and tenacity. Words in lieu of acrylics and oils. Paper verses canvas. Yes, a book is very much like a piece of art.

And like that art, regardless of how well it's painted, Dogs Playing Poker is still...well...a painting of dogs. Playing poker.

I was impressed with the brushstrokes, so to speak, of Jess Haines' writing. The way she tells a story appeals to me. I thought there was a pleasing balance of exposition and description, of world-building, the creation of mythos, and the explanation of how the world of Shiarra works. It blended well with the setup of the plot, then its description as it unfolds. It's a gift to be that talented with telling a story, and it's one I admire. Never once did I feel that the world, despite being new in this debut story, overwhelmed the action or characters, or vied for dominance against the developing plotline.

The world created here, the scenery, if you will, felt very well defined and thorough. The creation of the races, while perhaps not unique, was at least explained quickly, concisely, and never dragged down the pacing. There was also a pleasing and satisfying amount of attention given to the framework of race relations in the world and how humans and Others have adapted, how human society bent to allow for it. I'm not saying that I was totally sold on how much was supposedly achieved in a brief decade (that one strained my willing suspension of disbelief a little), but how it was written was very well done.

Unfortunately, the plot didn't match the level of skill with which the story was told.

There was potential there. In fact, I was completely hooked for the first 25% of the book. From the moment Shia caved so quickly to Royce, though, the cracks in the plot started to widen and deepen for me, and Shia started to look less and less like a heroine and more and more like a selfish, reactionary, highly bigoted, dimwitted scaredy cat with few morals and an unhealthy willingness to break whatever law necessary so long as her day isn't inconvenienced. And the ungainly plot stumbled along, lurching from point to awkward point, tumbling into plot holes, riddled with inconsistencies, contradictions, and contrivances.

Sadly, it just didn't make much sense to me, and too many of the characters decisions and actions lacked foundation or logic, too few showed even a glimmer of sense or intelligence.

I can handle some lack of originality in a book. I've never found that to be a serious detractor for me, especially if the common threads are in line with my preferences or favored aspects. I like paranormal and fantasy themed books, so arguing or being overly critical when one series has some similarity to another within those themes seems a bit like pointing to a barn and saying, "Dude...nice barn...but it's red..."

I noticed it's red, but it wasn't so red that I cringed when I saw it, like some bar- um, books and some series, which do more than paint the barn red, they build from the same blueprints and rustle all the animals (do I know how to beat a metaphor to death or what?). Sometimes, it is what it is, and a book about werewolves, vampires, and vampire hunters (or PIs who don't actually do any investigating) is going to look a lot like a bunch of other books with similar character archetypes. As I happen to like books about weres, vamps, and hunters, that's okay with me to a point. It certainly was okay with me in this book.

But the plot has to be better conceived, and no matter how well it's executed, how well written it is from both an artistic and technical standpoint, it has to make sense. All the way through. Otherwise, it's just dogs...playing poker.

I have high hopes that the skill that Haines showed off in her writing style rubs off on her ability to conceive and execute a coherent plot. There's a lot of promise in Shiarra's world, and I hope it's realized. We'll see, I guess, as I purchased the second book in the series, Taken By The Others. Such sophistication and skill in the telling of a story deserves rewarding, but the story itself has to improve if I'll continue the series beyond that.

I like this review! The analogies certainly made me laugh and I can see some of your points.

I think you'll be pleasantly surprised by TBTO - I personally felt like I could (maybe sort of) actually like Shiarra, instead of wanting to smack her and say MAN UP.

(And yes, I totally get sucked into her worldbuilding too. Fantastic, isn't it??) :D

Thanks Binah! I'm happy to have given you a chuckle.

It's nice to see you on OGBDA and I hope you stop by now and again.

Haines' world building and story telling really impressed me in this book, and I AM looking forward to TBTO. It's sitting quietly in my TBR queue on my Kindle. Waiting, though perhaps not so patiently! :)

Hi Tracy,
I meant to stop by to comment sooner than this, but I just wanted to say thank you for such a thoughtful, in depth review. I'm very flattered at what you had to say about my writing style.

I do hope you enjoy TAKEN BY THE OTHERS when you get to it!

Ms. Haines,
Thank you for stopping by and commenting on my review, even though some points were critical. I appreciate that.

I can't express enough how much I enjoyed the sophisticated and polished writing style in HBTO, and look forward to TBTO.

Return from Hunted By The Others to Urban Fantasy

Return from Hunted By The Others to One Good Book Home