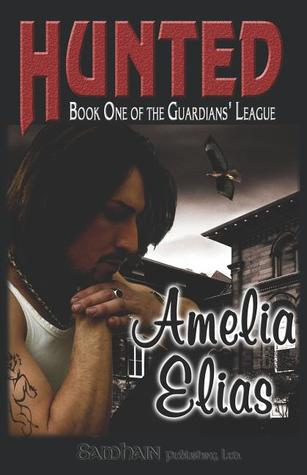 Amelia Elias has penned three books in the Guardians' League series (Hunted, Outcast, and Chosen) and I can only hope that there will be more - I would especially enjoy Ronin's story. I was incredibly surprised when I started out with Hunted. I don't know what I was expecting...well, okay, I do - and admittedly I was jaded by years of disappointment in books from less commercially credited authors. I expected a mediocre (at best) paranormal romance with probably a bit more eroticism than I'd find in mass market paperback titles.

What I got was a thrilling read with a strong yet endearing male lead, Diego Leonides, a vampire and member of the Guardians' League, a league that hunts down Outcast vampires - vamps who kill humans for their blood and for the sheer thrill of destruction and pain. Diego's life takes a turn for the odd when he's mowed down - literally - by former cop on the run, Sian Lazuro - a woman who saw something that would get her killed if the crime lord responsible finds her. The car crash knocks Sian out and does a fair bit of damage to Diego, too, and when Sian wakes up in Diego's bed, nothing will ever be the same for either of them.

Sian's a particularly pleasant surprise. A female lead that's strong, smart, and capable in her own right, and I enjoyed her reaction to Diego and her introduction into a world in which vampires DO exist. She's a damaged woman, alone in the world and feeling forced to keep it that way to protect others. She's a cop who tries to protect Diego from that same crime boss she testified against, even after accepting (though not truly understanding) that he's a vampire. Both Diego and Sian are fully developed and well written.

Is Hunted and the world Elias has penned it in the most original premise? Absolutely not. We've seen similar worlds and stories from authors with such mass market appeal as Sherrilyn Kenyon, J.R. Ward, Lara Adrian, Christine Feehan, and others. This particular type of paranormal romance isn't new, but don't disregard Amelia Elias or the Guardians' League because of that. Elias doesn't have the following or the rep of those others, but she deserves to be there at the top, because while the premise isn't new, Hunted still seemed fresh - and remember, this is the jaded reader saying so.

All in all, Hunted is a strong first book in a series that I hope will extend beyond the three that exist so far. I highly recommend all three.