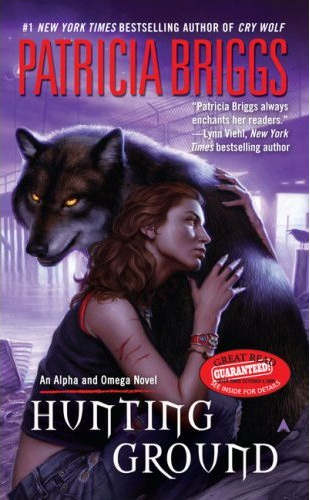 I'm probably going to sound like a total nut job when I admit this, but when I started reading Hunting Ground, I had this moment of...sublime contentment, I guess. I'd love to say that it was an utterly unfamiliar feeling when reading, because at least then my insanity would be localized and recent in origin, but alas, it's a feeling I'm quite familiar with. Happens every time I pick up a Briggs book and start reading. There's an intangible...something...in her her books that I've always found uniquely satisfying. The Mercy Thompson series is still my favorite, but with the second in the Alpha & Omega series, I'm warming to Anna and Charles Cornick.

I'll admit, Cry Wolf (Alpha and Omega, Book 1) wasn't my favorite Briggs book. I had just as much appreciation for her writing style and that nebulous sense of comfort reading it, but I was wary of Anna and the whole Omega concept. I also have a personal preference for linear story telling and Anna and Charles' series starts earlier in the Mercy Thompson series timeline than the last book I'd read in that.

In Hunting Ground, however, something really started to click for me. Probably right around the time Anna realized that Omega didn't equal ubersubmissive and started to acknowledge some of her own power in the pack hierarchy and in her personal relationship with Charles. The Omega role was explained a bit more and I liked that explanation. On top of that, I enjoyed the deepening relationship between Anna and Charles, and thoroughly enjoyed seeing their understanding of each other grow and expand as well. I'm heartened by Anna starting to heal a bit from her tragic past...or if not heal exactly, at least...start to triumph over the residual effects. She's got a long way to go, but I totally appreciate Briggs giving her a very natural-feeling evolution instead of rushing the process for the sake of story.

The Alpha & Omega series still seems slightly lacking in the layers and depth of the Mercy Thompson series. Hunting Ground less so than Cry Wolf, though, with the threads of were politics, the Beast, and a vampire goon squad - and ANY time you toss a Fae into the mix, you get all sorts of complexity. So I have every confidence that this series will continue to get better with each installment. I just wish we didn't have to wait so darn long between each of them!