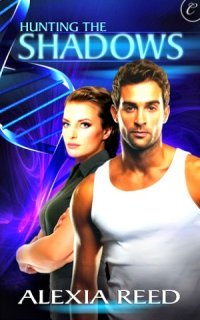 He tried to stop them, tried to destroy it. The Centre, a shadowy, shady research facility ruled by the Council, creates genetically engineered children with spectacular psychic abilities, trains them to be warriors, then uses them as mercenaries. The methods the Centre uses, as well as what the Council commands it do to achieve their nefarious goals, must be stopped.

Her name is Amy. She, too, has spent her life in the Centre, but Amy isn't an agent. She's little more than a lab rat. Her entire life has been lived in isolation, not only because of the power she wields with her mind, but because unless warded, the overwhelming stimulus of every other mind around her will kill her. And she's too valuable to the Council to be allowed to die. Yet.

Amy needs J.C.'s help. She's spent time in his mind, even tried to help him escape after he blew the labs. He's the only one who has enough telepathic ability to hear her when she speaks to him, not that he believes she's real at first. She tries to warn him that there is more evil at the Centre than even he realizes. She's sensed it. Has, in fact, seen through the eyes of the killer as he murders his victims. And that killer's hunger is growing.

J.C. is more than Amy's only hope for freedom. To stop the psychic vampire from draining more victims he'll need her help in locating him. She's the only one who can. Even if her mind finally crumbles under the strain. Even if she becomes the killer's next target.

I liked it at first. Reed's debut kicks off with an impressive action sequence that sets the pace and tone of the book at pulse-pounding with a side order of gut-wrenching. Readers are dropped fast and hard into J.C. and Amy's world, and have to hold on tight as the story races forward, sketchily introducing that world and the people in it even as it seems to be exploding around them all. Not a lot is explained, but what is doesn't paint anything close to an idyllic picture.

It's dark, dangerous, and not just a little deadly.

Though that's absolutely my kind of read, it didn't take long before things in the story started to go a bit downhill for me. The lack of explanation and character development that marked the initial chapters became an issue as it continued throughout the story. I never did get a clear idea of the full scope and purpose of the Centre, how large a population it had, where it was, and who ran it. Near as I could tell while reading it, the Council is bad, their Enforcers are bad, the research done is bad, what is done to the objects of their research is bad...hell, even the "good" guys are not exactly lily white.

I liked J.C. as a character, but his past was ill-defined and his actions both as an agent and a researcher hinted at dark deeds done. Deeds that, perhaps, he was trying to stop from continuing, but still done. He was definitely one of the most noble of the characters in the book, and certainly one of the most well-intentioned, but after taking a good, hard look around that world and spending time reading about the characters in it, I can't say that's saying much.

Amy was also perfectly likable as a character. She was, in fact, my favorite character for the complexity that was the combination of her mental strengths and weaknesses. I can't say I totally bought how socially adjusted and relatively normal she seemed to be after the life she's been forced to live, alone and tortured again and again, but I felt for her and found her sympathetic.

I didn't think, though, that Amy and J.C. had any huge amount of chemistry. Amy was a little too innocent and J.C. a little too jaded for me to completely love their romantic relationship. I wanted to, very much, because I did like them both, but I just couldn't quite see them as equals. That made it hard for me to fully appreciate the way their relationship progressed with the story.

The biggest issue I had with this read, though, was also the most insurmountable. The plot threads surrounding the serial killer who is hunting members of the Centre, supposedly comprising the main plot conflict of the book, failed to have any emotional impact on me whatsoever. It all just paled in comparison to the horror generated by the atrocities being committed by the Centre and its workers, all at the behest or with the approval of the mysterious Council.

I couldn't have possibly cared less about the victims being killed by a serial killer. Not when the Centre condoned and facilitated the torture and killing of children. Not when researchers were giving children little black marks that determined the value of their continued existence and Council Enforcers were coldly torturing and murdering innocent people as threat tactics and motivation. I was too busy pondering how any of the "good" guys could knowingly, willingly working for that dehumanizing, demoralizing, torturous, murderous place and still consider for an instant that they had any moral high ground.

By that point the serial killer just seemed like overkill. No pun intended.

When I combine that issue with the lack of definition in the world and the characters, as well as the chaotic execution of all the plot-driven story elements, I just couldn't quite connect with this one. Had the story been significantly less ambitious and more focused on one big nasty instead of inundating readers with such a wide variety of evil, it would have had greater appeal for me. I do think there's potential for the series, but I'm not yet convinced it'll be realized any time soon.

Return from Hunting the Shadows to Romantic Suspense Genre

Return from Hunting the Shadows to OGBDA Book Review Home