I Dream of Genies

Didn't Really Work For Me 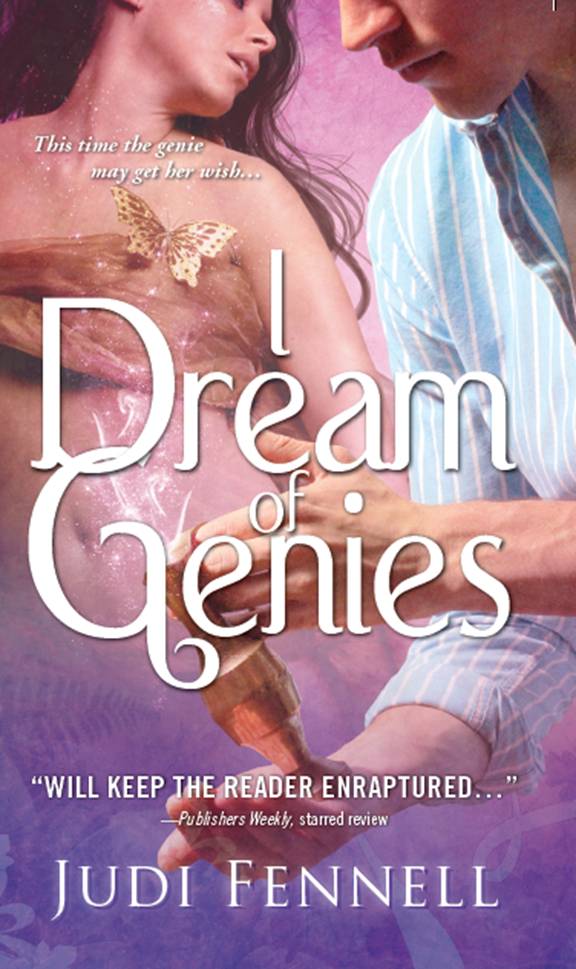 It doesn't matter how palatial the bottle, being sentenced to spend three thousand years locked up in one, with only a talking cat and the random dragon hatchling as company, is harsh. Yes, Eden is technically responsible for the death of her master, but she only meant to scare him and she had very good reason to do so. Unfortunately, there is no such thing as mitigating circumstance for the djinn High Master.

Halfway through her sentence, Eden's existence revolves around the Home Shopping Network (her bottle has an excellent cable package), raising dragons, and waiting for Matt Ewing to jog past the window of the shop in which her bottle sits. Day in, day out, that is her life. No human contact, magic limited to what she can do in her bottle without drawing attention, and shameless ogling.

Until, that is, the day that the shop owner was late. He finally swept into the store hours past normal opening time, gathered up some of the merchandise in boxes - her bottle included - and cleaned out his office. Just like that, the genie Eden had been thrown away.

Struggling contractor Matt Ewing has been having a rough few months. Work isn't going well and he's teetering on the brink of failing at the dream that was his father's legacy. Jogging is something that helps clear his mind and he tries to do it every day. Who knew that having a half-naked woman dressed up like a harem girl slam him to the ground would work even better?

Okay, that is sort of a no-brainer. Anyway...

Ever since Eden dropped, quite literally, onto his lap, Matt's eyes have been opened to a world of magic he hadn't known existed. Problem is, just because Eden's bottle popped open and she tumbled out doesn't mean her sentence is over, and the djinn High Master's vizier Faruq, a power-hungry djinn with an unhealthy obsession with Eden, knows she's free. Eden knows Faruq will be coming for her, sooner or...well...sooner, and he'll have no compunction about going through the mortal - but sexy! - Matt like tissue paper if necessary. Anything he has to do to make Eden his slave.

Despite the imagination and attention to detail that Fennell evidenced in this series debut, as well as several other positives that usually serve me very well in my reading, I struggled through I Dream of Genies and had difficulty connecting to the characters and the story. It wasn't the writing, either. Most of my issues are strictly preference-based and completely subjective.

Eden's character was a little too close to sitcom stereotype for my taste and Matt was too much of a Debbie Downer for the first part of the book. The romance thread didn't work for me at all. The relationship seemed to consist of little more than Eden and Matt getting groiny at every opportunity. As large a fan as I am of lusty good times, I do prefer romances that have a bit more depth than that.

The thing that bothered me most, though, was the overall tone. There were things in the book that made me chuckle out loud, and several passages I highlighted for their quirkiness, intelligence, or charm, but in the end, I'm not as big a fan of the lighter toned, fluffier paranormal or fantasy romance. Which seems like a complete contradiction, even to me, because I love when a book makes me laugh.

Maybe it's the type of comedy that gave me problems in this book. The almost slapstick nature in the comedy of Eden's wacky magic, combined with the over-the-top acid trip that was the trip to Al-Jannah, pushed me into inexplicable magic overload.

I had a different sort of problem with the villain of the story. For all Faruq's threat, he's the sort of bumbling villain who can do no right - who, maybe not coincidentally, reminded me too much of Jafar from Disney's Aladdin in job position (vizier), creepiness factor, feelings of self-importance, and effectiveness as a villain. My preferences lie in villains who pose a more serious threat.

There were several truly imaginative and wonderful aspects of Fennel's series debut, and I liked seeing a paranormal about genies. Unfortunately in this case, the book strained too many of my personal reading preferences to be consistently appealing. The romance, which can improve my overall appreciation of a novel if it's done well, didn't have enough d evelopment or content for me to elevate my appreciation of the rest. This book, sadly, just wasn't for me.

Return to top of I Dream of Genies

Return from I Dream of Genies to OGBDA Book Reviews Home