I Own the Dawn 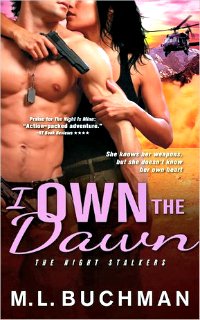 After years of intense work and training, viciously struggling for every hard-earned inch of achievement, Sergeant Kee Smith has finally made it. Using everything from the grim lessons she learned as a kid on the streets to the impact her luscious warrior-woman body has on a man, she has clawed and wrestled and fought for every last bit of progress in her military career, all to get her to one place: SOAR.

The Army's Special Operations Aviation Regiment is the best of the best in the sky, and Kee is driven to not only be the second woman ever to make it into SOAR, but to excel in the deadliest piece of military hardware ever flown, a Direct Action Penetrator (DAP) Black Hawk helicopter.

She's finally made it. She's in SOAR and she's got her DAP Hawk. Okay, she's a little disappointed at the lack of excellence in her team. Sure, she respects team member Lieutenant Archibald Jeffery Stevenson III. Despite the pretentious name, he's a hell of an Army pilot. The fact that he's also a long drink of water who makes her hormones sit up and take notice ain't too shabby either.

The rest of them are just going to have to eat her dust as she shows them what a real female warrior can do in a helicopter.

Problem is, when you're on the front line in a hot zone, missions have a habit of not going according to plan. Kee is in a deadly position in a dangerous world, and simple survival is often dependent on your team. Kee needs to be more than just a hell of a gunner or the best woman in SOAR. She's going to need Archie...and a pretty big attitude adjustment...just to get out alive.

Two books into this series and I'm still surprised and impressed by Buchman's world of brave, loyal military heroes. I'm so glad I didn't let my prejudices about male romance authors and my ambivalence for military-themed romance hold me back from this series. I would have missed out on great characters and thrilling stories.

The beginning of this book worried me, though. I loathed Kee. Frankly, I would've been thrilled if Emily had parked a DAP Hawk on her head. She was an abrasive, obnoxious, ignorant, disrespectful bitch in need of a swift kick in the ass. Every time she referred to Emily as Major Hoity Toity, or dared to be dismissive of the elite force she was fighting beside, I wanted to drop her into a vat of boiling oil.

Of course, one of the reasons she offended me so much was because she mocked the heroes Buchman introduced in the first book, heroes I love as much as I loved their story. Seems to me, hating Kee for that is more a credit to the job Buchman did bringing those characters to life than a condemnation of Kee's character.

Kee is deeply wounded and insecure despite her achievements, and she wears Bitch like a flak jacket to hide those insecurities. She has some serious self respect issues and gets defensive with anyone who has had an easier life than she has - and in her mind, that's just about everyone. The chip on her shoulder is an RPG. On the flip side, she is also intensely honorable and a real straight shooter, even at her own expense. By the end, thankfully, and with a lot of help from Archie, I liked her.

Archie was not what I normally prefer for my romance heroes. Alpha male he definitely is not. Intelligent, awkward with women, polite and moneyed, he's more genteel gentleman than kick-ass warrior. A romantic suspense anomaly. While I can't say he hit the same Happy Reader buttons that Major Mark "Viper" Henderson did in the first book, I will say that I completely appreciated him as a change of pace in the genre, and liked him very much as a character.

I liked Kee and Archie as a couple very much, too.

The plot was lighter on suspense than the first book. That wasn't as appealing to me, but I can't argue that Buchman writes a hell of a tale. The suspense inherent in wartime operations is what drives those elements of the plot and Buchman does it extremely well. He imbues every scene with an air of authenticity and realism that is, at times, truly terrifying. It was much more believable as a story than the plotline of the previous book, if perhaps not quite as entertaining on a personal level.

I've become quite a fan of this series and the characters in it. Every element is just damn good. Even those things that annoy or frustrate me, or characters who really rub me raw, work well within the framework of the story and the world of the series. Things like the extensive military jargon, which is often hard for me to follow, lends itself to the feeling of authenticity. And Kee, who infuriated and offended me at every turn in the beginning, was still someone very easy to imagine in the real world. That's adroit storytelling, and it provided a well-balanced, solid, entertaining read. I'm very much looking forward to the next in the series. 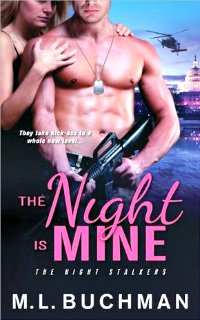 Return from I Own the Dawn to Romantic Suspense

Return from I Own the Dawn to One Good Book Home