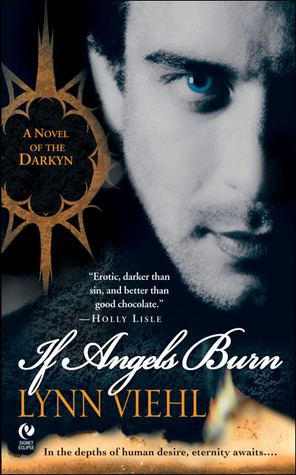 This is such an underrated book - but I've noticed from the reviews on Amazon.com, that's probably because it's been promoted as a paranormal romance. That's truly a shame, because it is in no way a paranormal romance. What it is is a deep, dark, sometimes ugly, definitely treacherous but imaginative world with complex and flawed characters leading extraordinary lives.

Alex is a reconstructive surgeon stolen off the streets of Chicago and brought to Michael, the tragically scarred Darkyn who was captured and tortured by the Brethren, a sect of religious fanatics out to destroy the race of beings who survived...in a manner of speaking...the Black Plague. Restoring Michael leads Alex down a path of loss and pain and change for both of them.

I admit I had some difficulty getting into this book and I felt a bit overwhelmed with the story at first. I felt it introduced the main characters of both factions - Darkyn and Brethren - and Alex and her estranged brother, John - without really building the world or explaining what was going on. There was terminology used between characters but not explained to the reader, and quite a bit of French treated the same. At times I felt confused and a little lost, but I stuck with it and I'm very glad I did. Things do eventually become clearer, and are explained a little better the further you go into the book. Once I did start to grasp the mythos of the Darkyn and some of their political structure and spent a bit more time with the characters, I ended up really liking and appreciating the depth and breadth of the story and the world. I can't say I have a total grasp of the Darkyn's political and societal structure, and there are questions that aren't answered in this book - though for a series beginner, that's not at all uncommon - but by the book's end I was satisfied that enough had been explained and the world fleshed out enough to be very satisfied with the read.

There were several aspects of the book I liked very much - Alex's character in general and any of the scenes where she was dealing with the Darkyn family she helped were a particular favorite, as well Phillipe, Michael's Seneschal. He was definitely my favorite secondary character. There were also a couple of really nifty plot twists towards the end that I in no way saw coming and I like when a book catches me off guard that way. All in all, it wasn't a completely comfortable read...it's very dark and has several truly torturous themes...but I ended up liking it a lot more than I did at the beginning. I will be continuing the series, but I'll hold off recommending this one to paranormal romance fans. Dark urban fantasy fans would dig it if they can be patient with the beginning, but those looking for a feel good HEA may want to go elsewhere.

Return from If Angels Burn to Urban Fantasy Genre

Return from If Angels Burn to OGBDA Book Reviews Home