If You Hear Her 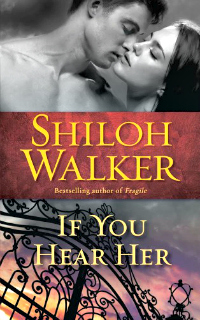 It was a gorgeous day as Lena Riddle walked her retriever Puck along their normal path through the woods. The weather was perfect, the company perfect, and Lena was enjoying herself as much as her dog. Then she heard...something. It was faint, like a soft grunting, and it raised the hair on the back of Lena's neck even as Puck started to balk at continuing along their path. He'd never done that before.

As eerie as that experience was, it was one that eventually faded from her mind as time passed. It was an inexplicable one-off, freaky but largely forgettable. Then one night a woman's scream shattered the stillness with panicked desperation and ripped Lena from a dream.

Ezra King is a cop on leave, staying in his grandmother's house in the small town of Ash to heal from his wounds and a tragedy that still haunts him. Meeting Lena definitely draws his attention away from his own problems. She is beautiful and compelling...and way more than he can handle, but that doesn't stop him from wanting to try. From wanting her.

When their paths cross again at the police station, he overhears her statement about the screams that had woken her the night before. It's clear to him that the cops aren't convinced she heard what she claims to have heard, as if her blindness somehow precludes her from being a reliable witness. They thought she imagined it, or had been dreaming.

Ezra isn't so sure. His cop senses are tingling. But Ash isn't a big city where violent crime is as prevalent as it is tragic, it's a nice little town where nothing ever happens and everyone knows everyone else. Where a blind woman has taken his breath away and left him shaken.

Could it also be a place where something very, very bad happened to some poor, unknown woman? And if so, the person responsible may not like Lena having been witness to it. He may not like it at all. That's not a risk Ezra's willing to take.

I loved this series debut by Walker. It had all the elements that make a Romantic Suspense one of my favorite genres. The main characters were complex and well-defined, and their chemistry simmered and smoked on the page. The storyline balanced their romance and the threads of suspense in such a way that both plot elements were fully rounded out and meaty. It's a delicate balance, and one that many in the genre don't quite manage.

Walker does flawed and/or damaged characters particularly well, and that was in evidence here with Ezra, who has the full travel set of emotional baggage dragging along with him everywhere he goes. His physical and emotional wounds help flesh out his character and explain a lot about who he is as a man and a cop. He's not perfect by any means, nor does he fall victim to that too-good-to-be-true pitfall, but his faults and moments of darkness emphasize his struggle to rise above his issues for Lena's sake and safety. I loved him a lot.

And Lena is everything I adore in a romantic heroine. Strong and independent, intelligent, with a bit of a bite to her personality when warranted, she appealed to me on every level. Her blindness is a challenge she meets and beats daily, and there's not an ounce of self-pity or weakness in her even as she works around the few limitations she has. I loved her attitude.

I also appreciated Walker's attention to detail in regards to Lena's blindness. In the first few chapters in particular she described things from Lena's point of view in a way that subtly but masterfully clued readers in to her lack of vision without spelling it out. As the book progresses she remained true to the basic but often overlooked fact that description given from a blind character's point of view has a very different emphasis than for one who is sighted.

There were a nice group of secondary and ancillary characters with a myriad of tiny plot threads woven together between them, colored by their combined sense of familiarity and personal history, and driven by a few small external conflicts that added depth and complexity to the plot even as it flavored the whole of the story with a lovely small-town feel.

Not to be outdone, the main arc of the suspense is a taut, grisly psychological thriller that Walker deftly weaves throughout the rest. It's my personal favorite of the suspense genre, which I'm sure added to this book's appeal for me. It's also a thread that spans the three books in the trilogy, so there is no final resolution to that storyline at the end of this book. Instead of making the book feel incomplete, however, Walker provided readers with plenty of story between the main characters, including a hell of a romance, and those elements allowed for a nice sense of closure at the end, even as it enticed me to pick up the next book.

And I did. In fact, I have to find out who the sick, sadistic bastard is who is raping, torturing, and killing women. Walker keeps his identity tightly concealed. That, too, is a preference of mine in psychological thrillers and romantic suspense. Then again, this book hit so many of my preferences for books in this genre that I couldn't help but love the whole book. I can't wait to see how it all evolves from here.

Return from If You Hear Her to Romantic Suspense

Return from If You Hear Her to One Good Book Home