If You Know Her

A Solid Conclusion to a Great Trilogy 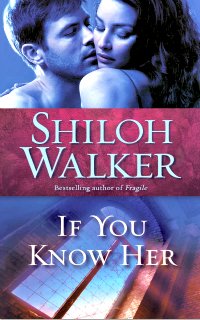 Supposed to matters not at all when you can't get the terrified, agonized screams of your last remaining family member out of your head, even if they are imaginary.

The thing is, the facts didn't quite add up, no matter how many the cops in Ash, Kentucky had shoveled at her. The timeline was...just a little off. Nothing too bad, nothing so out of whack that it couldn't have happened the way she was told it did. But definitely in a way that left Nia with a feeling of hopeless incompletion and unassuaged grief. Definitely in a way that compelled her to risk everything to find answers. To rip away the blinders and hunt for a killer she believed was not only still alive, but still hunting women.

That meant returning to the small town of Ash, Kentucky. It also, apparently, meant accepting the help of the one man she thought, at one time, was responsible for Joely's death. Because once Law Reilly sees her again, he makes it clear there is no way in hell he is going to let her stir up trouble for herself without watching her back.

It had to be big. After three long books, the only way for this trilogy to come to a successful conclusion for me was that it had to be big. Walker did not disappoint. At least, not in the suspense and psychological thriller aspects, because man, the killer in this trilogy is one sick, twisted, horrifying monster and readers get more than a glimpse into his blood-stained, murderous mind with several chilling and disturbing scenes from his point of view - including the dehumanizing rape and murder of some of his victims.

Not for the faint of heart, that.

The way Walker keeps readers guessing with a couple of well-placed red herrings and slick hidden-in-plain-sight twists and turns was especially well done, though, and one of my favorite aspects of this book and the trilogy as a whole. Well, it kept me guessing anyway, as my list of potential subjects kept spinning like a terrifying Rolodex since the start. And I like being kept guessing very much.

Again, Walker's gift for complex and damaged characters sets this book apart from others in the genre. Nia's pain over the loss of Joely, along with her control issues and stubbornness, gave her dimension and depth, even as it sometimes made her a little difficult to like. I have to admit, there were moments where I wanted to shake her for her frustrating behavior even as I was relating to her, knowing I wouldn't have done much different in her situation.

Nia wasn't the only one who occasionally gave me fits. Law, who was a calm, rational presence in the first book but stumbled a little in the second, seemed to go overboard on the caretaking for me in this one. And I had a hard enough time accepting these two as the romantic main characters to start with, because I still hadn't gotten over the way Nia showed up at Law's with a gun she intended to use, or Law's subsequent response to that incident, in the previous book (bros before hos, man, even if your bro is your female best friend).

Maybe because of that, their evolving relationship never really seemed truly organic to me, and it lacked a certain depth of emotion that could have elevated it beyond what ended up seeming a purely physical, lust-based physical attraction. Their relationship just never really clicked for me, the largest stumbling block - in fact, the only stumbling block - of this read.

For romantic suspense lovers, though, this is definitely a trilogy I'd highly recommend. True, not every single element in every single book was to my personal taste. A handful of the various antagonists' (the Big Bad and lesser antagonists in each book) actions and decisions didn't work for me. The main characters, while diverse and damaged and wonderfully complex, didn't always fit together as neatly as I would have liked. When it comes to the trilogy as a whole, though, any issues I had with individual books ended up being relatively minor. And for the record, I loved the first book (a rare five-star gem), liked the second (four stars), and because of the excellent conclusion to a very dark and disturbing suspense arc and an okay, if not spectacular romance, more than liked this one (four and a quarter stars).

Return from If You Know Her to Romantic Suspense

Return from If You Know Her to One Good Book Home