That First Kiss is a Doozie 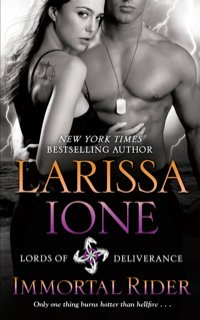 Disclosure:   An ARC of this book was provided to me by Forever book publisher Grand Central Publishing via NetGalley.

For five thousand years she's ridden. She is Famine, one of the four Horsemen of the Apocalypse. Raised in hell, betrothed to Satan, she is a warrior unparalleled, both feared and respected for her skill, revered for her beauty. Cloaked in shadows and mystery, she lives a life of responsibility and struggle...when she's not tripping off to her swank beach home for random and frequent parties and revelry.

And please, call her Limos, party girl extraordinaire. That whole Famine thing is such a downer. After all, who the hell wants to be shackled to the most heinous force of evil that exists? Or sit around waiting for her agimortus to break and turn her into a world-destroying psychopathic monster like her beloved brother Reseph, now known only as much-less-beloved Pestilence.

A party is just where Aegis warrior Arik Wagner is sitting, watching the delectable Limos as she and her brothers, as well as several other demonic and human factions, party down in celebration of both big brother bad-ass Ares' engagement and the latest triumph over Pestilence. Just watching Limos gets Arik's juices pumping and makes his body tight with need. That is one fine looking Horseman. A total HILF.

When he slips away from the crowd to get some much-needed space to regain his equilibrium, he isn't expecting her to follow and offer to spar with him to work off his tension. Given that the tension he's feeling is centered in his pants, he doesn't mind at all taking her up on it. The move he makes, locking lips with the beauty, turns out to be the single biggest mistake of his life. And as he's dragged down to hell to suffer unending torture for daring to kiss the fiancé of the world's most jealous überdemon, he realizes a brutal truth. That mistake may very well be his last.

The dark, violent, disturbing world that Ione has created for both this series and her earlier Demonica series is not for the faint of heart. Nor is Ione, for that matter. She is brutal on her characters and seems to relish making them earn their Happily Ever Afters through much blood, torment, and crippling injury. And she's damn good at it.

There's a lot of story in this book. The plot is complex and layered...and a little chaotic (in a good way)...with several secondary and ancillary plot threads woven together with the arc of the relationship between Arik and Limos. Sometimes, if I'm completely honest, I felt all that story overshadowed the main characters' relationship to varying degrees.

Pestilence, the Horseman I love to hate, has some awesome page time that I really enjoyed. From the early stages of the first book in the series, I've assumed we're eventually going to see him get some sort of redemption - though I can't currently imagine how that would happen given everything he's done. Still, the glimmers we see of Reseph through the unmitigated horror that is Pestilence is so damn powerful. It's heart-breaking and painful and absolutely perfect in a gut-clenching way.

This isn't a book I'd want to be my first experience with the series. It probably could be done, there's enough explanation and exposition provided to bring readers up to speed on the big points, but I think the book would have much less emotional impact and much of the nuance in the writing would be lost. I'm even glad I've read the Demonica series before this one, for that matter. Knowing the characters and experiences from that series provides a solid foundation in this one, especially when those characters cross over.

With all that, though, and as well written and imaginative the book and the series are, I ended up feeling very conflicted about the overall story here. It's such a maelstrom of agony, lies, and manipulations, including the relationship between Arik and Limos, that I can't actually say I enjoyed it. There was an awful lot of hopelessness and pain, and some of the story elements were more depressing than the HEA between Limos and Arik were able to balance.

Still good story, though. Intense. Powerful. Full of action, witty dialogue, and hot sex. And the story elements that serve as an introduction to Thanatos' upcoming book are far too compelling for me to even consider not continuing the series. I just hope that Ione will go slightly easier on the poor guy than she did on Arik. I don't expect her to, of course, but I can hope.

"Helloooo. I'm a Horseman of the Apocalypse, and I'm betrothed to the most infamous, most powerful demon in existence. I couldn't draw more attention to myself if I wore Lady Gaga's meat dress to a PETA convention." 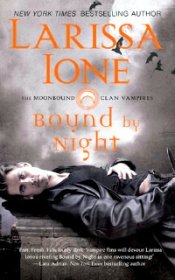 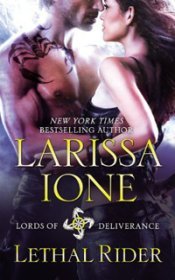 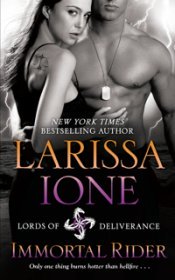 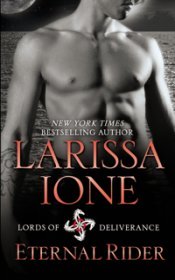 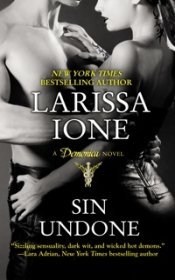 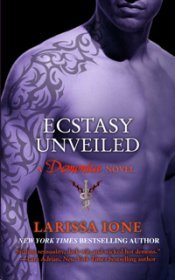 Return from Immortal Rider to One Good Book Home