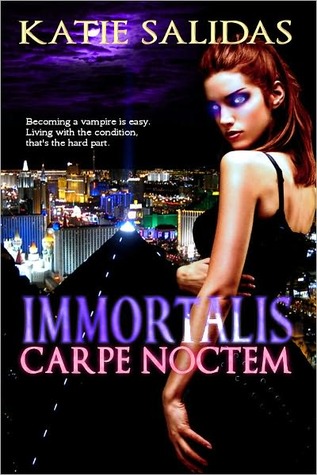 I wanted to like this first book in Katie Salidas' Immortalis series. I'm a huge fan of vampire fiction and I do so love to feed my addiction. Unfortunately, Immortalis: Carpe Noctem was lacking in too many areas to engender any enjoyment from this read.

Alyssa is brutally attacked and almost raped on the campus of UNLV as she walks home alone late one night (sensitive readers beware - the attack was very descriptive and detailed with it's brutality). She's saved...in a manner of speaking...by the taciturn Lysander who is forced to turn her when her attackers left her too close to death to survive as a mortal. Being born into the immortal life isn't easy on her, and if that isn't enough, two different and equally deadly factions are out to get her - Lysander's former mate and self proclaimed leader of the vampires (who's still in a snit a millennia old that Lysander left her), and a deadly fanatical religious sect that's determined to erase all immortals from the planet and has now set their sights on Las Vegas.

I wish I could say the plot was unique or Salidas' take on vampire mythos was compelling. I can't. In point of fact, anyone who favors fanged fiction - from urban fantasy to gothic to paranormal romance - has seen all or a part of the plot and mythos more than once. There is one point in particular that is relatively new or at least not quite so retread but it is in no way sympathetic or appealing. Some of the rest was just plain bizarre.

Alyssa is immature, whiney, and overburdened by a ridiculous black vs. white morality. She makes stupid choices and she pays for them...only to make them again. She spent most of the book bemoaning her inability and unwillingness to be what she is. I find that tedious in a character after a point. Lysander was a peculiar mix of stoic to the point of rigid automaton and nearly feral with flashes of intense emotion that were startling for their misplacement and irregular occurrence. Any and all development of the relationship between them felt far more like the author's wishes instead of the character's desires and read as clinical and devoid of any lasting affection or emotion until the very end, and by then, I just didn't care enough to be bothered.

The vampire mythos had some potential as it was developing, but it came to a crashing, unsatisfying end with the miasma of missed opportunities and lack of logic that stripped me of any willing suspension of disbelief and made me repeatedly question, "Why?" That's never a good thing, but in this case in particular, having that question answered thoroughly and completely was necessary to engender any sympathy at all for these characters. If it's a spoiler, I apologize, but part of Salidas' mythos in this series includes vampires actually killing their prey - almost every time. While I would say that this is a rather unusual need in vampire fiction of late, the very absence of any good reason why that has to be true, and a couple of conflicting pieces of evidence that would push for it not being true, makes it very difficult to buy into the necessity. And if, as a reader, I don't buy into the need for vampires to kill their prey every time, then when they do...well...that's not exactly an endearing trait. It's almost impossible to like these characters because of that.

I respect an author's decision to create the mythos as he/she sees fit, but I don't have to like it - or read it - if there hasn't been enough provided to explain and make the characters likable over and above their murder rate. Not to mention - even if the more aged vamps only have to kill once a week...that's fifty-two kills a year. If your city has...lets say only 20 vampires old enough to go a week between killings...that's 1,040 murders and disappearances a year if they're all old vamps. Every year. One newbie who has to feed every day, or even a slightly less newbie who has to feed every two or three days...can you say astronomical body count?? Someone's eventually going to notice several hundred missing persons a year, no matter how many are dregs of society (and not every vamp kills only the humans who may need killing). Given the vast number of books and series that I enjoy which embrace the gray area of morality, with characters that have brutal and bloody pasts and presents, I can say with authority that I'm not squeamish or particularly caring for humanity as a whole when the story supports it. There was an utter lack of common sense or grasp of the "big picture" here.

And if the plot wasn't anemic enough, the mythos as lacking in credibility, or the characters limpid enough, the actual mechanics of the writing were just awful. Salidas is far too fond of commas and misplaces them with reckless abandon. The sacrifice of sentence structure does nothing to help the already stilted narrative and clunky dialogue, either. I can understand Lysander talking like he's a couple of thousand years old - that's fine - but the rest of the narrative and dialogue needed a lot of work, to the point that I don't think Lysander's method of speech was actually intended, given everyone spoke similarly. Also, the writing style in this book was as strictly utilitarian as Lysander's decor, and poorly done on top of that. It lacks polish and is in desperate need of at least an editor for grammatical mistakes, if not story issues. For an independent publisher or an author self publishing, I'd suggest a reader's circle - beta readers who will tell it straight. Much could have been salvaged with a few nips, tucks, and edits.

As a general rule, I tend to be a little forgiving about the mechanics of writing if the story is compelling or the characters are interesting, even more forgiving of the story being cliched if the characters are great and the mechanics are good, but in Immortalis: Carpe Noctem there was an unfortunate trifecta of badness that left little to be enamored with. Ultimately, this was an unsatisfying and disappointing read.

Also, at the end of this book there was a sneak peak of the second in the series, Immortalis: Hunters & Prey. Upon reading it and seeing glimpses of the same sort of issues I had with this book, I will not be continuing with this series.