Favorite of the Series...So Far 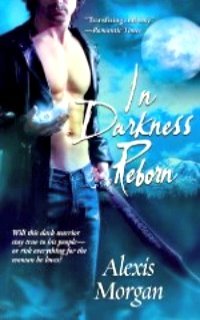 I have to say, Alexis Morgan's Paladins of Darkness series is really starting to grow on me. I had some critical issues with the first two books (Dark Protector and Dark Defender) that kept them from being truly stellar reading experiences for me (I liked both, but I didn't love them and rated each three stars)...and in truth, I thought there were a few in this book as well, but Barak's story is by far my favorite of the first three books.

Barak, the Other who saved the handler Laurel's life in Dark Protector, is having a lonely, difficult time adjusting to life on this side of the barrier, especially as he's well aware of how deeply his presence breeds resentment and anger in the Paladins around him. They are his mortal enemies after all. Finally, when the smack talk starts including Laurel, her mate Devlin Bane steps in and arranges a transfer of the Other to a less Paladin-heavy area of the Center than the medical ward. Having the Other forced on her doesn't do anything to please geologist and vulcanologist Dr. Lacey Sebastian, especially as her brother Penn is a Paladin and she's been raised to loathe the species responsible for so much death and destruction. But she's forced to accept Barak into her department, and she does actually need the help...but she sure wasn't expecting the zing of...something...that she got when she first shakes Barak's hand. A tremor of that particular magnitude is destined to rock both their worlds. But Barak IS Other, and as much as he chose to cross the barrier, he cannot risk sharing secrets that would make it easier for the Paladins to kill his kind, no matter how attracted to Lacey he becomes...and how very much just not being so alone any more means to him.

I still have a lot of unanswered questions about this series that probably should've been already addressed. I still have problems with some inconsistencies in mythos between the three books and some contradictory information. I'm still very confused and don't quite buy the way that Barak has been accepted - no matter how reluctantly everyone says it is - into the Paladin's stronghold and be allowed to walk around relatively unmolested. Yes, he's different than the mindlessly mad Others that surge across every time the barrier falls, but he's still Other - and no one's been interrogating him or pressing him for information on his species because one handler has befriended him? Even if that handler is the head Paladin's lover? That strains my willing suspension of disbelief to the breaking point, and always will. That being said, Barak's story - Barak as a character, actually - struck such a sympathetic chord with me that all the issues and the previous plot holes and contradictions didn't seem quite so glaring in In Darkness Reborn.

I feel for Barak. Alone - for longer than he's just been on this side of the barrier - and deeply lonely for it. Hated and reviled for what he is. No one but Laurel, really, with any sense of interest to look beyond that to WHO he is. Living a tentative existence at the mercy of Paladins who are sworn mortal enemies. Unable and unwilling to foreswear his sense of honor and be a traitor to his people, despite obvious issues with the world he came from. And deeply attracted to a woman who loathes him. I found him to be a very sympathetic and deeply honorable character, and I found a lot of poignancy and relevancy to his struggles as his and Lacey's relationship started to evolve. In it were echoes of the struggles and concerns of bigotry and intolerance. I think the concerns raised here harken to the real world struggles of bi-racial couples, same-sex couples, and any other "unconventional" relationship. I found that aspect to be rewarding to read about.

Yes, I had some issues. I was deeply disappointed that we still haven't been given much more than a glimpse into the motivations and life of an Other...and I'm very frustrated that an entire book with an Other as the main character didn't reveal what the heck they call themselves! "Other" starts to get demeaning after awhile. I didn't totally buy the rather quick evolution from loathing and disgust to love that Lacey went through. It wasn't horrible, there was time that passed, but I think it would've been a bit more believable had her original position not been QUITE so negative. Still...the reason she felt so negative, with a brother as a Paladin, was understandable. I'm also more than a little tired of the seeming repetition of the mysterious big bad guy who moves his wee little corruptible pawns around with anonymous (for the reader) phone calls and visitations. In the first book, the guard was the corrupt pawn, the regent lost his life for it in the second, and in the third we have...the IT guy with a gambling problem. All being manipulated and maneuvered by the Evil Man Behind the Curtain. After three books that thread is getting more than a little frayed. I'd like to see some true progression. And frankly, I still don't buy into illegal gem trading as a very convincing way to make a lot of money. How do you sell gems that don't exist in our world? Wouldn't that draw some attention?

Regardless, all those issues really faded in importance with the way Barak's personality stole the show for me in In Darkness Reborn. I genuinely liked him and totally sympathized with his very internal struggles. And I liked Lacey, too. Yeah, she did a bit of an abrupt about face on her feelings, but she's smart, spunky, and really good at her job and I like that in a female lead. I'm enjoying the series more and more and look forward to continuing with the next installment!

Return from In Darkness Reborn to Paranormal Romance Genre

Return from In Darkness Reborn to OGBDA Book Reviews Home